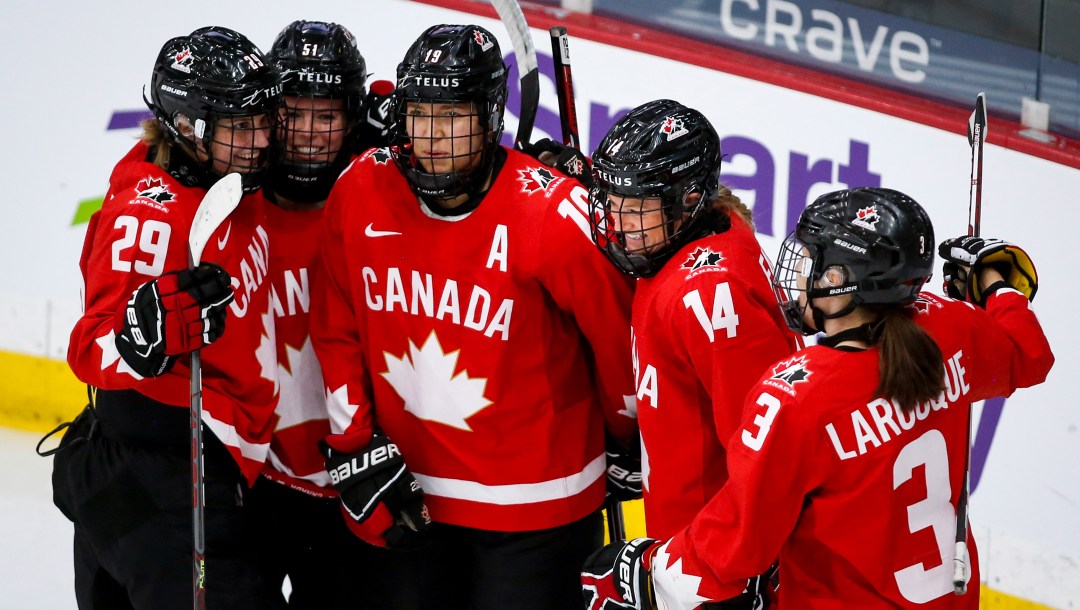 After defeating Switzerland 4-0 in the semifinal on Monday evening, Team Canada will face off against the United States for the 2021 IIHF Women’s World Championship title.

To open the scoring, Renata Fast scored 5:14 into the first period with a pass from Brianne Jenner.

A minute and a half later, Canada scored again, this time with Fast providing the assist for Melodie Daoust‘s fifth goal of the tournament.

At the end of the first period, Canada had outshot Switzerland 20-2.

The third goal of the game came in the second period from Daoust, after deflecting a shot from Captain Marie-Philip Poulin and into the net. Daoust remains the leader in tournament scoring with her six goals and six assists, ahead of Natalie Spooner and Jenner, respectively.

In the final frame, with three minutes to go, Rebecca Johnston scored her second goal of the tournament to make it 4-0.

The Canadians will face the Americans, winners of the other semifinal with a 3-0 win over Finland, in the tournament final on Tuesday at 7:30 p.m. ET.

Team Canada’s dominance continued into the knockout stage on Saturday as they handily defeated Germany 7-0 in the quarterfinal.

Ashton Bell opened the scoring for the Canadians just 1:29 into the game, tapping the puck in off a beautiful feed from Mélodie Daoust.

The early surge continued as Natalie Spooner made it 2-0 just over two minutes later, cashing in on her own rebound off the post.

Brianne Jenner added a third goal for Canada late in the first period, giving them a commanding 3-0 lead going into the intermission.

Spooner collected her second goal of the game 8:01 into the second period, beating German goaltender Franziska Albl from long range to make it 4-0.

Captain Marie-Philip Poulin, who made her return to the lineup after missing last game against the United States, got in on the scoring as well. Her one-timer from the slot snuck by Albl to make it 5-0 for Canada.

The Quebec connection of Poulin and Daoust teamed up for a pretty passing play as Daoust scored her second of the game to give Canada a 6-0 lead early in the third.

Finally, Sarah Fillier put the exclamation mark on the win, tucking home Canada’s seventh goal of the game with 6:26 to play.

It was a dominant display from Canada from top to bottom as they outshot Germany 52-3, controlling the game from start to finish. Goaltender Emerance Maschmeyer recorded the win and the shutout in net.

Team Canada looks to be in top form as they advance to Monday’s semifinal. Their opponent is yet to be determined but as the top seed, they will take on the lowest-seeded semifinalist.

Team Canada remained undefeated on Thursday with a dominant 5-1 over Team USA to close out the preliminary round of the 2021 IIHF Women’s World Championship.

Back in net was Quebec native Ann-Renée Desbiens. Captain Marie-Philip Poulin didn’t play today after blocking a shot with her chest in the previous game against Switzerland.

Melodie Daoust opened the scoring just over 13 minutes into the game with a pass from Natalie Spooner. With 6:10 left in the first period, Renata Fast scored Team Canada’s second goal off a bouncing puck. It was initially ruled no-goal, but was overturned after video review.

In the second period, Jamie Rattray scored two straight goals—the first coming from a rebound of a Brianne Jenner shot, followed by a with a wraparound goal three minutes later to beat U.S. goalie Alex Cavallini.

The Americans got on the board early in the third period when Lee Stecklein scored with a shot from the blue line.

Canada finishes the preliminary round at the top of Group A. Their quarterfinal game takes place on Saturday, August 28 at 7 p.m. ET.

Team Canada’s winning streak continues at the 2021 IIHF Women’s World Hockey Championship in Calgary, as they defeat Switzerland 5-0 in their third preliminary game. Goaltender Emerance Maschmeyer faced 12 shots and earned a shutout in her first start of the tournament.

For the third consecutive game, Canada did not score a goal in the first period. They had 21 shots and a few good scoring opportunities, but could not get one past Swiss goaltender Andrea Brändli.

Canada scored a shorthanded goal five minutes into the second period to open the scoring. Blayre Turnbull came racing down the wing and across the crease before teammate Emily Clark tapped it into the open net.

Team Canada added two more goals later in the second period, just 17 seconds apart. Jaime Bourbonnais scored her first goal of the tournament, then Natalie Spooner deflected a shot from Renata Fast into the net to make it 3-0.

With just over three minutes to go in the second, Mélodie Daoust redirected Erin Ambrose’s shot from the blue line, beating the Swiss goaltender and giving Canada a comfortable 4-0 lead.

Early in the third period Spooner positioned herself squarely in front of the Swiss goaltender and scored her second of the game, this time deflecting a shot from Ella Shelton.

The Canadians dominated the shots on goal category, tallying 63 shots in 60 minutes. Switzerland had 12.

Canada will face the United States to conclude the tournament’s preliminary round on Thursday, August 26th at 6 p.m. ET. The Americans are also 3-0, coming off a 6-0 win over ROC.

Looking to build on their opening win, Team Canada returned to the ice for their second game of the IIHF World Championship in Calgary posting a dominant 5-1 win over Team ROC. While the Canadians got off to a slow start, they had a huge second period to stay in the W column.

The Canadians controlled the first seven minutes of play, but only managed three shots on ROC’s net. After a scoreless first period, Canada led the shots 17-3.

Team Canada found many chances in the first period. Sarah Fillier and Marie-Philip Poulin had breakaway opportunities but ROC goaltender Nadezhda Morozova did not let anything slide by.

The second period changed the game for the Canadians. Getting things started seven minutes and 29 seconds into the second period with both teams skating at four a side, Sarah Fillier went five-hole to open the scoring for Canada. Just 42 seconds later Ella Shelton jumped in off the blue line, received a pass from Brianne Jenner and doubled the Canadian lead to 2-0.

The offence kept coming for Canada while ROC defence began to break down. At 13:48 into the second, Erin Ambrose scored the third goal of the game for Canada. She hammered a point shot off a Russian leg and into the back of the net. Following the third goal, ROC replaced goaltender Morozova with Anna Prugova.

After 40 minutes of play Canada outshot Team ROC 21-2 and lead 3-0 heading into the final period.

Just two minutes into the third, Mélodie Daoust found a loose puck in the crease and chipped it past Anna Prugova extending the Canadian lead even further. Rebecca Johnston redirected a shot from Emily Clark to get her name on the scoresheet for the first time of the tournament.

Olga Sosina spoils the shutout bid with a buzzer-beater, scoring a power-play goal with a quick shot to the short side to make the score 5-1 with only 1.3 seconds left of play. After 60 minutes, Canada led the shots 62-7 over the fatigued Team ROC.

Canada will be in action again on Tuesday at 6:00 p.m. ET as they face off against Switzerland.

The Canadian women’s hockey team opened their campaign at the IIHF World Championship in Calgary with a 5-3 win over Finland on Friday.

Things got off to a rocky start for Canada as the Finns scored just over two minutes into the game off a long range shot from blueliner Nelli Laitinen.

Then after two consecutive tripping calls against the Canadians, Finland swiftly increased their lead to 2-0 off a powerplay goal from Minnamari Tuominen.

Canada finally got on the board with five minutes to play in the second period as Jamie Lee Rattray drove to the net and poked home her own rebound.

The goal seemed to spark the team as just 20 seconds later captain Marie-Philip Poulin rifled a shot from the slot to tie the game at 2-2.

Canada carried that momentum into the third period as Erin Ambrose scored less than three minutes in off a double deflection, giving the Canadians their first lead of the game.

Finland fought back with a deflection of their own as Elisa Holopainen tied the game at 3-3 with 12:47 to play.

Not to be deterred, the Canadians went immediately back on the attack and were quickly rewarded. Natalie Spooner circled behind the Finnish net and wrapped the puck in front as Sarah Fillier pounced on the rebound to put Canada up 4-3 just 25 seconds after the equalizer.

Brianne Jenner added an empty netter in the final minute to seal the 5-3 win for Canada.

It was a poetic victory of sorts for the Canadian women’s team, whose last appearance at the IIHF Worlds was over two years ago due to the COVID-19 pandemic, and whose last loss at the worlds was against the Finns in the semifinals of that tournament.