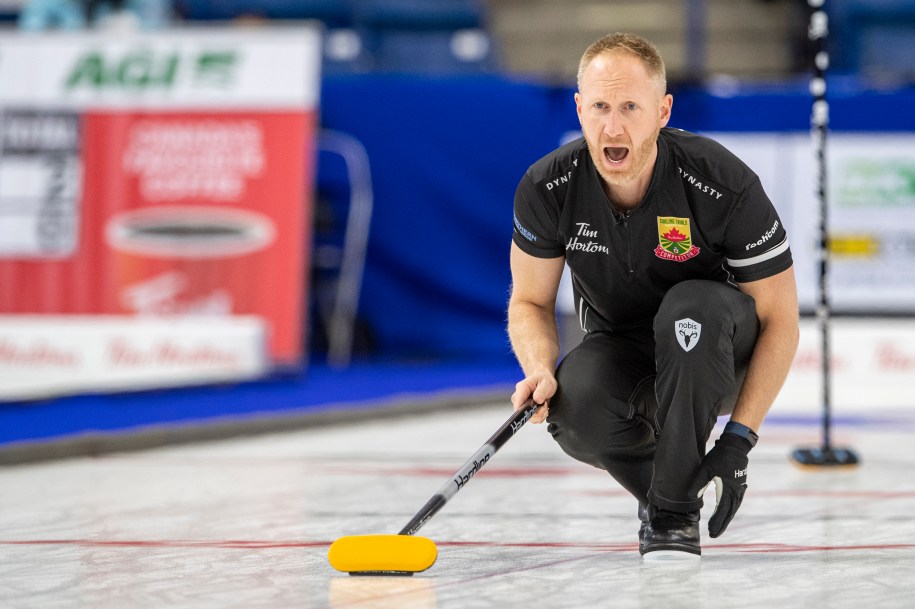 Brad Jacobs made it to the 2013 Canadian Curling Trials after winning the pre-trials tournament. After earning that final spot, Jacobs won the Trials in Winnipeg, sending his team to Sochi 2014. The team followed it up in Sochi with Olympic gold.

Eight years later, Jacobs is back into the Canadian Curling Trials final, after defeating PyeongChang 2018 Olympian Kevin Koe 8-3 in the semifinal. Jacobs — along with third Marc Kennedy, second E.J. Harnden, and lead Ryan Harnden — is one win away from representing Team Canada at Beijing 2022, but will have to get past another Olympic gold medallist to do that.

“There’s no place we’d rather be, nothing else we’d rather be doing than being out here, enjoying the moment, having fun, and making lots of curling shots,” Jacobs said after his win. “Just fighting and battling for every inch for one another.”

Team Jacobs didn’t look back from there. After Koe recorded a point in the fourth end, Jacobs continued his hammer efficiency in the fifth. A hard final stone throw resulted in four points for Team Jacobs, their second of the game. Despite Koe recording two in the sixth end, he decided to shake hands, conceding the game to Jacobs.

Coming into the semifinal, Team Jacobs led the field in hammer efficiency with 58 percent. Against Team Koe in the semis, Jacobs was 100 percent.

With the win, Jacobs improves to 8-1 at the Canadian Curling Trials in Saskatoon. Next up, the final against Team Gushue, in the latest edition of the “Battle of the Brads.” Gushue has a slight advantage in the head-to-head with Jacobs, leading 29-27. In their round robin game, Gushue edged Jacobs in extra ends, winning 7-6.

READ: Canadian curlers qualify for playoffs and tiebreakers at Trials

“What’s it going to take to beat those guys? A near perfect performance,” Jacobs said on his matchup with Gushue.

Jacobs comes into the final brimming with confidence. He tied a Canadian Curling Trials record with most points in a single game (12) in his final round robin match against Team Horgan just before his dominant performance against Koe.

The final should be close, as Gushue and Jacobs games often are.

Like Jacobs, Jennifer Jones competed in the 2013 Canadian Curling Trials in her hometown of Winnipeg.

Her team won that competition, en route to winning Olympic Gold at Sochi 2014.

The parallel paths of Jacobs and Jones continue eight years later as both are in the final, one win away from representing Canada at Beijing 2022. Jones— along with lead Dawn McEwen, second Jocelyn Peterman, third Kaitlyn Lawes, and Lisa Weagle — defeated Thunder Bay’s Team McCarville 8-3 in the semifinal Saturday night.

“Four years ago, if you could say you could be in the Olympic Trials curling final, you would sign up a heartbeat,” Jones said after her win over McCarville. “It’s so hard to get here in Canada. We were lucky to have the opportunity to do it once so to do it again would be incredible.”

McCarville qualified for the semis after defeating Team Einarson in extra ends 4-3 earlier on Saturday in the second tiebreaker. Jones finished second in the round robin with a 5-3 record, awaiting a rematch with McCarville, who she defeated 8-5 in the first game of Trials.

Jones and McCarville recorded single points in the first and third ends. After Jones retook the lead in the fourth end with a single, she built on her lead in the fifth with a steal of two. McCarville’s final draw was under curled, unable to knock out Jones’ rocks closest to the button.

McCarville responded with a double of her own in the sixth end, throwing her final stone by the center guard to knock Jones’ two rocks out near the button. Jones recorded a double in the eighth and stole two in the ninth, sealing the match.

With the win, Jones is trying to secure a berth to her second Olympic Games. In her way, is Team Fleury, undefeated on the week at the Canadian Curling Trials with an 8-0 record. Fleury’s closest round robin game came against Jones, which she squeaked out 7-6. As a team, Fleury leads in all throw-throughs with 84 percent while Jones is at 82 percent.

“It’s going to be a close game that comes down to the last rock,” Jones said. “Usually it’s the team that makes the most shots late in the game that usually wins. Hopefully we’ll come out strong.”

Members of Team Fleury are vying to qualify for their first Olympics. Team Jones looks to add to a storied legacy.

It sets the scene for a dramatic conclusion to see Team Canada’s women representative in the upcoming Olympic curling competition.