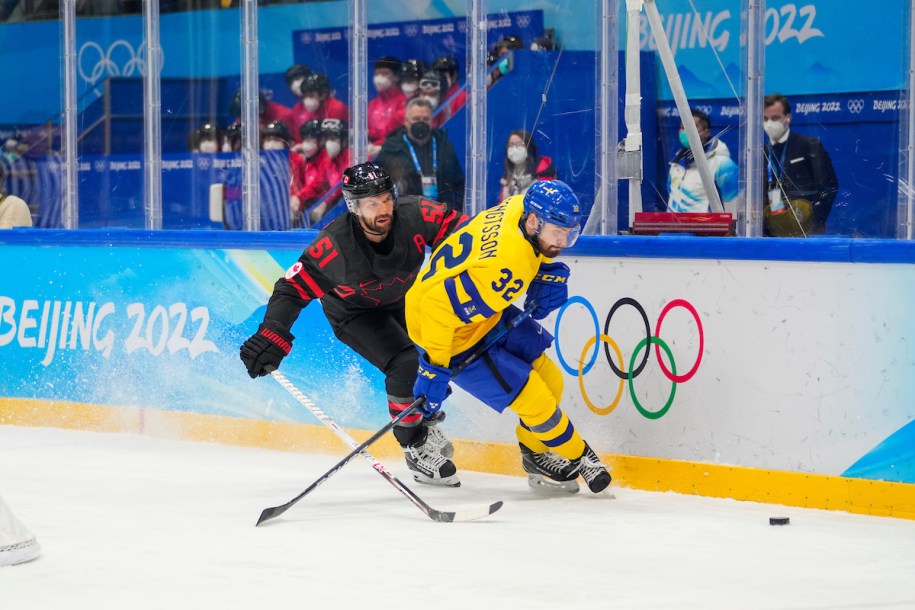 Team Canada’s run in the men’s hockey tournament at Beijing 2022 has come to an end.

Lucas Wallmark scored halfway through the third period and Anton Lander added an empty net goal as Sweden edged Canada 2-0 in a defensive showdown at National Indoor Stadium. The quarterfinal victory by Sweden moves them into the semifinals where they’ll take on the ROC.

Slovakia will take on Finland in the other semifinal. The semifinal winners will play in Saturday night’s gold medal game while the losers will meet in Saturday morning’s bronze medal game.

Canada was unable to generate much offense against Sweden’s strong defensive play. The Canadians recorded just 22 shots on Swedish netminder Lars Johansson in the game and only five in the third period.

Canadian goaltender Matt Tomkins, starting his second game in as many days, wasn’t tested a whole lot either, making 24 stops in the loss.

Shots were 10-8 in favour of Sweden in a scoreless opening frame. Canada had a power play opportunity near the midway mark of the period but couldn’t get much going.

Play opened a bit around the halfway mark of the second period. Sweden’s Mathias Bromé had the best chance, bunting the puck under Tomkins. The Canadian goaltender quickly smothered the puck to end the threat.

Late in the period, a Canadian point shot got through the legs of Johansson but the puck was cleared away by a defender before Daniel Winnik could get to it.

Sweden opened the scoring at 10:15 of the third. After a turnover by Canada at the blue line, Wallmark skated in and fired a wrist shot that deflected off a Canadian stick and over the glove of Tomkins.

Canada pulled Tomkins with just over two minutes remaining. At 18:10, Lander scored into the empty net to make it a 2-0 final. The Canadians pulled their goaltender again in the final minute but were unable to generate quality chances.

Canada reached the quarterfinals after a 7-2 victory over China in Tuesday’s qualifying round game. The team went 2-1-0 in the preliminary round, posting a 5-1 win over Germany and a 5-0 victory over China. Their one loss was a 4-2 defeat against the United States.

The other quarterfinals saw Slovakia upset the United States 3-2 in a shootout; the Russian Olympic Committee defeat Denmark 3-1; and Finland down Switzerland 5-1.