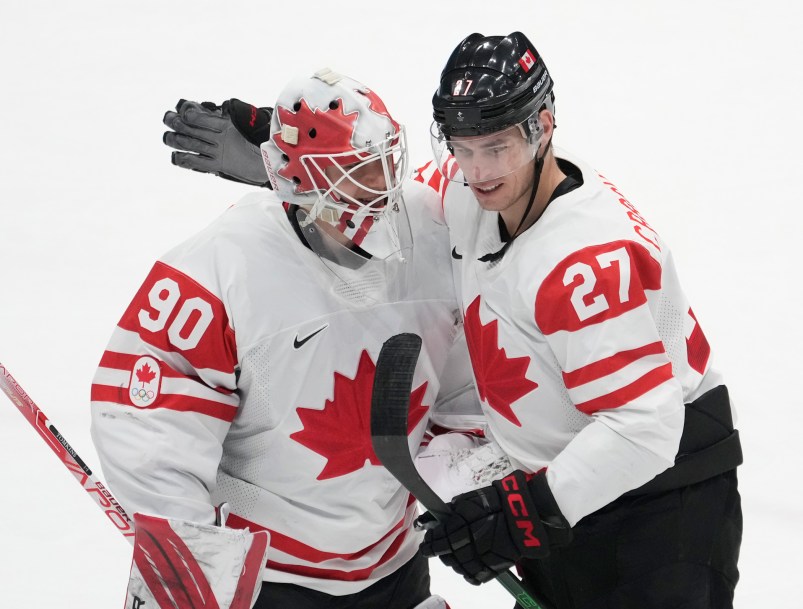 Kent Johnson is making the most of his Olympic Games experience.

Originally named to Canada’s reserve squad, Johnson has proven to be one of the team’s best offensive weapons at Beijing 2022. The 19-year-old had another impressive showing Sunday, scoring once and adding an assist in Canada’s 5-0 win over China in men’s hockey play. Johnson now has a goal and three assists in three preliminary round games.

The victory gives Canada a 2-1 record in the brief preliminary round following a 5-1 win over Germany and a 4-2 loss to the United States. They’ll face China once again in the qualification playoff round to see which team earns a spot in the quarterfinals.

Street got the scoring going early. Just 2:09 into the first period, Johnson cut towards the goal but couldn’t get a shot off. Street skated in and poked the puck under goaltender Paris O’Brien — who is listed as Yongli Ouban while part of the Chinese men’s team — to make it 1-0 Canada.

Tambellini made it 2-0 at 6:44. Alex Grant made a nice stretch pass through the neutral zone to Tambellini who flew into the offensive zone and slid the puck five-hole.

Canada led 3-0 after one thanks to an O’Dell goal at 10:06. Josh Ho-Sang skated into the slot and fired a pass to O’Dell, giving the two-time Olympian a wide open net to extend Canada’s lead.

China gave Canada a good test in the second period, pressing hard on a couple of power plays. Early in the period with Ho-Sang serving a too many men penalty, China came close to scoring, hitting two posts. Then late in the period with Mark Barberio in the box, China kept Tomkins busy in the Canadian net, maintaining puck possession in the offensive zone for much of the man advantage.

Not long after Barberio came out of the box, Canada swung momentum back in their direction by making it 4-0 at 18:03. Jason Demers found Johnson with a cross ice feed who beat O’Brien five-hole with a hard wrist shot.

Shots were 12-10 in favour of Canada in what was a fairly even middle frame.

Canada’s power play connected at 6:23 of the third period. Owen Power fired a shot from the top of the circle that was redirected in front by Knight to make it 5-0.

Tomkins stopped all six shots he faced in the third to post Canada’s first shutout of the Games.