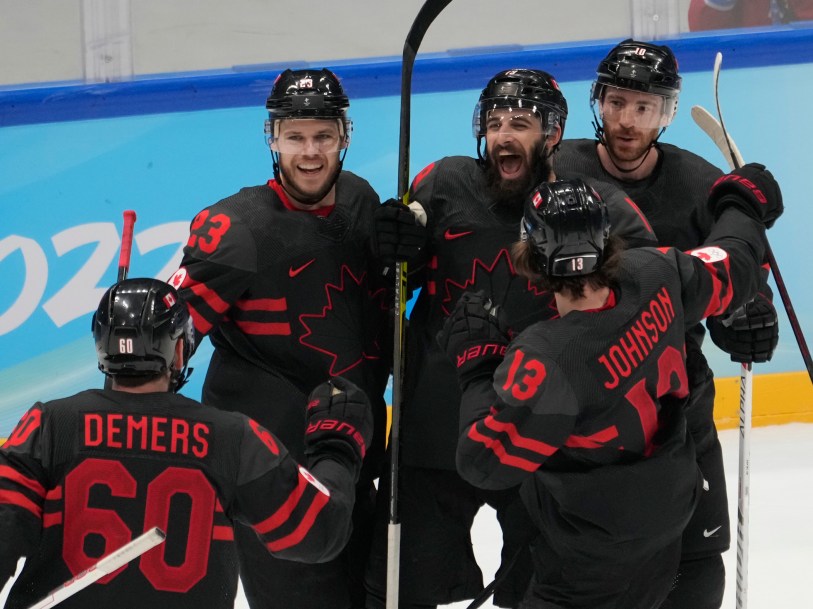 Team Canada has advanced to the quarterfinals of the men’s hockey tournament at Beijing 2022.

Adam Tambellini recorded two goals and three assists to lead Canada to a 7-2 win over China in qualifying round play at National Indoor Stadium. Canada, now 3-1-0 in Beijing, will face Sweden, 2-0-1, in Wednesday’s quarterfinal contest. Puck drop is scheduled for 8:30 a.m. ET.

Jordan Weal also scored a pair of goals for Canada while Eric O’Dell, Eric Staal and Jack McBain added singles. Matt Tomkins had a strong performance in net to earn his second straight victory over China.

Tomkins had to be good early in the first period, stopping Tyler Wong, who is listed on the scoresheet by the Chinese name Taile Wang, on a breakaway just a few minutes in and then denying Spencer Foo, listed as Shuai Fu, on a penalty shot attempt at 4:02.

Weal got the Canadians on the board at 6:57 with the first of his two power play goals. Tambellini ripped a shot off the post and the rebound went to the stick of Weal who had an empty net to make it 1-0. Then on a two-man advantage at 9:55, Staal sent a pass through the crease to Weal who fired a shot off a Chinese defender’s leg and in, giving Canada a 2-0 advantage.

China got back within one when Cory Kane, listed as An Jian, scored at 15:32. Owen Power turned the puck over in his own end and Kane capitalized, roofing a shot over Tomkins to make it a 2-1 game through 20 minutes.

China goaltender Jeremy Smith, listed as Shimisi Jieruimi, made 15 stops in the opening period but did not return to the game due to injury. Paris O’Brien, listed as Yongli Ouban, took over in goal to start the second.

Canada scored on another power play at 6:36 of the middle frame when Tambellini fired a one-time shot from the circle that went off a China defender and in. Then at 8:39, Tambellini was hooked up on a breakaway and was awarded a penalty shot. On his free attempt, the Canadian forward beat O’Brien with a low shot blocker side to make it a 4-1 game.

At 12:05, Jason Demers fired a point shot that was redirected nicely by O’Dell, giving Canada a 5-1 lead.

Canada got into penalty trouble late in the period and China capitalized. With Morgan Ellis serving a five-minute elbowing penalty and Tyler Wotherspoon taking a slashing minor, Kane netted his second of the game on the two-man advantage, putting a rebound up and over Tomkins to make it a 5-2 game after two.

Staal made it 6-2 at 15:55 of the third period when the Canadian captain let a long shot go that went off a China defender and past O’Brien. Then on a power play at 8:19, McBain put in the rebound of a redirect to make it 7-2.

Canada had a few other quality scoring opportunities in the third period but could not add to their lead. Tomkins stopped all six shots he faced in the frame, securing a 7-2 victory.

The other men’s hockey quarterfinal matchups will feature the United States taking on Slovakia; the Russian Olympic Committee facing Denmark; and Finland battling Switzerland. The winners will advance to the semifinals.