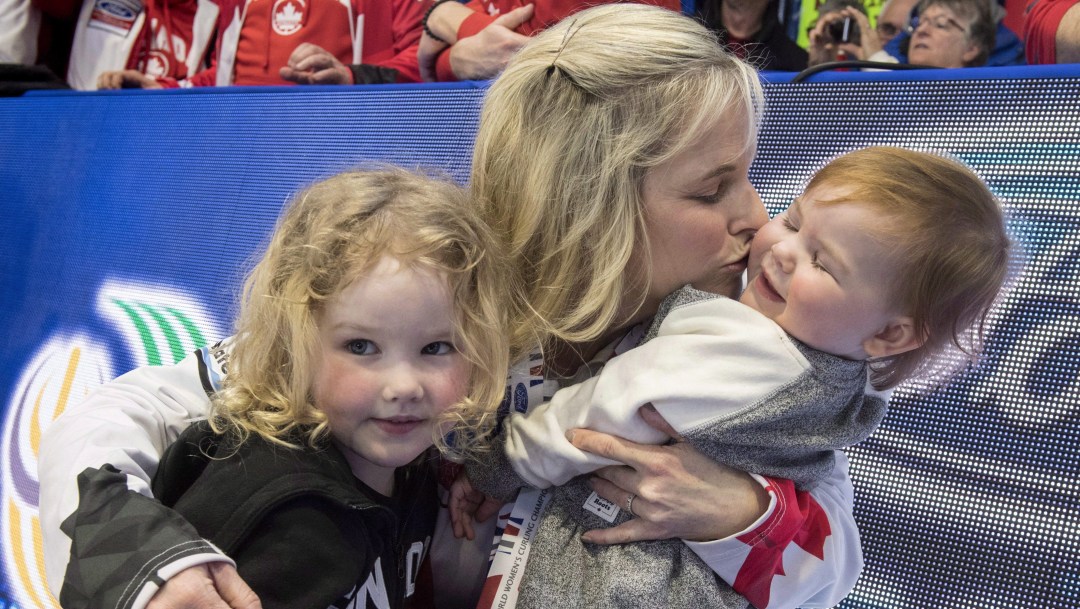 On a day during which we celebrate all of the different kinds of moms out there, let’s take a look at some of our Team Canada moms who work hard everyday to shape and inspire the next generation.

Regardless of whether they are competing at the Olympic Games or keeping track of a busy toddler at home, these moms of Tokyo 2020 and Beijing 2022 truly are rock stars.

Three-time Olympic medallist Daoust isn’t shy when it comes to talking about her little guy, Matheo. Before jetting off to Beijing 2022 where she won a second gold medal, Daoust told Olympic.ca about balancing being a mom and a professional athlete.

After giving birth to her first child Isabella in 2012, Jones was a gold medallist for Team Canada at Sochi 2014. In 2016 she brought her second daughter Skyla into the world, but her days as an elite curler were far from over. At Beijing 2022 she took to the rink as the skip for Team Canada and you can bet she played her heart out and made her girls proud.

When Landry announced her retirement in November, she did so as one of the most prolific try scorers in the history women’s rugby. A two-time Olympian, Landry was Team Canada’s leading scorer at both Rio 2016 and Tokyo 2020. She may argue with you, though, that the best try she ever scored was the birth of her daughter who she welcomed with her wife in September.

Bujold made her Olympic debut at Rio 2016. In 2018 she welcomed daughter Kate Olympia into the world. She returned to competition in 2019, taking the top spot in the 51kg weight class at the Canadian Olympic Qualifier. She was ready to go to the Americas Olympic Qualifier for Tokyo 2020, but when that was cancelled for a second time due to COVID-19, it looked like she would not be able to compete in her second Olympic Games because she had been on maternity leave during the events that would count towards the world ranking list. Bujold appealed this decision to the Court of Arbitration for Sport and won. With her three-year-old daughter watching from home, she took to the boxing ring again to represent Team Canada on the Olympic stage.

Lawrie debuted for Team Canada in 2005 and was a member of the softball squad that placed fourth at Beijing 2008. After a three-year retirement and giving birth to her two girls, Lawrie returned to the pitching circle in 2018 and was a key player in helping Team Canada book a ticket to Tokyo 2020. She was also threw the last pitch in Canada’s bronze medal victory in Tokyo. Despite all that, Lawrie states that being a mom is her best accomplishment to date.

After competing for Team Canada at London 2012 and Rio 2016 Gaucher welcomed her baby girl Sophie into the world just a few months before the start of the postponed Tokyo 2020. With strict COVID-19 protocols in place, it looked like this breast feeding mom was going to have to choose between chasing her Olympic dream and caring for her child. After an emotional plea on her social channels and being a voice for many other working moms in the same situation, the protocols were adapted and Gaucher was able to compete in Tokyo with baby Sophie in tow.

After making her Olympic debut at Athens 2004, where she competed in the 1500m, Elmore retired in 2012 and welcomed her two boys to the world in 2014 and 2018. Just seven months after her second son was born, she competed in her first marathon in January 2019. One year later she broke the Canadian marathon record, taking over two minutes off the previous mark. Seventeen years after her first appearance, Elmore returned to the Olympic Games at Tokyo 2020 where she placed ninth for Canada’s best result in the women’s Olympic marathon since 1984 — and at age 41 no less. Elmore doesn’t appear to be slowing down anytime soon and who would when you have a dream team like hers?

At London 2012, Abel came home with a bronze medal around her neck. After claiming a silver at Tokyo 2020, she arrived back home with not only a new medal but also a diamond ring on her finger after a surprise airport proposal. And then, as if her year wasn’t already exciting enough, one day after announcing her retirement she shared that she was pregnant. Her baby boy is set to make his arrival into the world very soon. The whole family — big sister Lillyanna, mom and dad — are so excited to meet him!

Before being named MVP of the women’s hockey tournament at Beijing 2022 and winning her third Olympic medal and second Olympic gold medal, Jenner and her wife Hayleigh welcomed their baby girl June into the world in September. Since then it seems that June has had both parents wrapped around her tiny little fingers (and it is not hard to see why)!

Homan made her Olympic debut at PyeongChang 2018 as the skip of her women’s team. In June 2019, she gave birth to her son Ryatt, who can be seen joining mom on the ice from time to time with his own curling broom. In early 2021, Homan competed at the Tournament of Hearts while eight months pregnant with her second child, skipping her team to the final. Less than a month after daughter Bowyn came into the world, Homan had her littlest cheerleader alongside her as she returned to competitive play. Of course, both kids couldn’t have been more supportive of their mom when she represented Canada in mixed doubles at Beijing 2022.

Three-time Olympian Bishop-Nriagu blew Canada away with her performance in the 800m during her second Olympic Games at Rio 2016. She matched Canada’s best ever Olympic result in the event by finishing fourth. In 2018, she had a new highlight when she gave birth to her daughter Corinne. After taking some time to recover and get to know her new little one, Bishop-Nriagu took to the track again to represent Team Canada at Tokyo 2020. This working mom just recently announced that there will be another little one joining their family and we are so excited for her cheering squad to grow!

At 21 years old, Cassidy Gray was the youngest member of the Canadian alpine skiing team at Beijing 2022