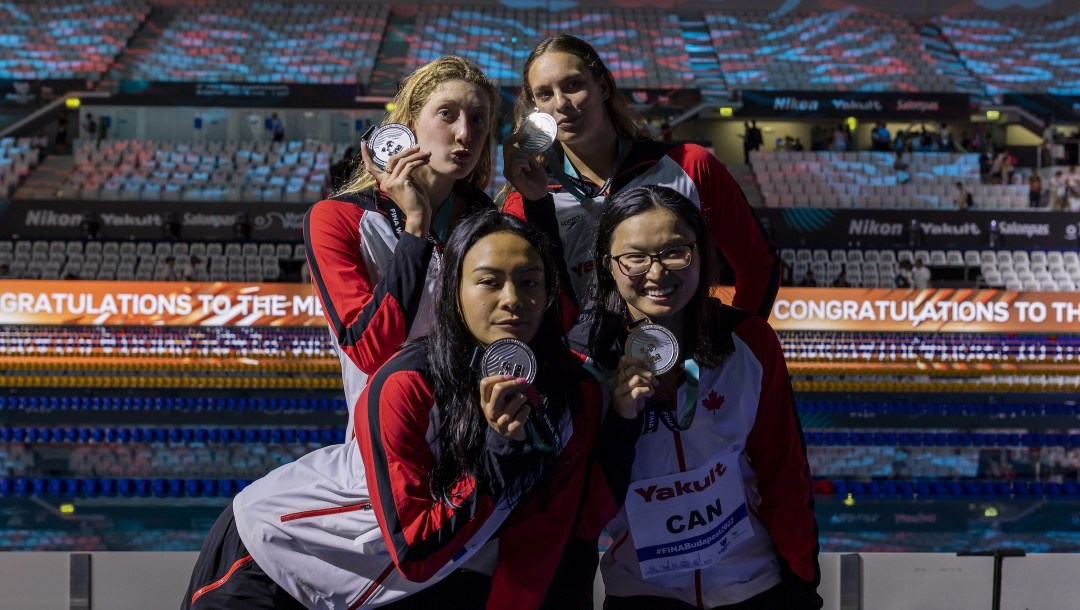 This past weekend, several Canadian athletes achieved some milestone moments in their careers.

At just 15, Summer McIntosh made some history at the FINA World Championships, Brandie Wilkerson and Sophie Bukovec won their first medal at the beach volleyball worlds, and triathlete Emy Legault earned her first career World Cup podium. And that’s not all.

Canada’s first medal at the FINA World Championships in Budapest was one for the history books as 15-year-old Summer McIntosh became the first Canadian to win a world championship medal in the women’s 400m freestyle. She claimed silver in a national record time of 3:59.39, to place just behind American star Katie Ledecky. In beating the national mark she set at the Canadian trials in April, McIntosh is just the fourth swimmer ever to go under four minutes in the event.

Later in the day, the Canadian quartet of Kayla Sanchez, Taylor Ruck, Maggie Mac Neil and Penny Oleksiak won silver in the women’s 4x100m freestyle relay, finishing in 3:32.15 to place behind Australia. Rebecca Smith and Katerine Savard swam during the preliminary races to help qualify Canada for the final. The medal is the sixth of Oleksiak’s career, making her Canada’s most decorated swimmer at the FINA Worlds.

On Monday, Kylie Masse will go after a third straight world title in the women’s 100m backstroke after ranking second in both the preliminaries and semifinals on Sunday.

In the semifinals, the Canadian duo defeated Germany’s Svenja Müller and Cinja Tillmann 2-1 (15-21, 21-15, 12-15). They had controlled their quarterfinal match to sweep Italy’s Valentina Gottardi and Marta Menegatti 2-0 (21-15, 21-12). In the first year of their partnership, Wilkerson and Bukovec had been seeded 20th in the tournament.

Canadians were on fire at the World Triathlon Cup in Huatulco, Mexico. In the women’s event, 26-year-old Emy Legault sprinted to her first career World Cup podium. Then two-time Olympian Tyler Mislawchuk captured his third straight World Cup podium in Huatulco. The 27-year-old is coming back from an Achilles injury sustained at Tokyo 2020.

The Diamond League made two stops this week, hosting a meet in Oslo, Norway on Thursday and another in Paris, France on Saturday. On a rain-soaked track in Oslo, Andre De Grasse won the 100m gold after clocking a time of 10.05 seconds, his fastest 100m of the season. Running in the 200m event in Paris, De Grasse had a season’s best time of 20.38 seconds but fell short of the podium, finishing in fourth position.

Rowing: A return to competition ✨

The second World Rowing Cup of the season was held in Poznan, Poland at one of the most modern venues in the world, Lake Malta. After choosing to skip the season opening stop, two Canadian boats in Olympic program events posted A final finishes.

A pair of Olympic champions from the women’s eight, Avalon Wasteneys and Sydney Payne, raced in the women’s four with Jessica Sevick and Kirsten Edwards to finish sixth. Another Tokyo 2020 Olympian, Trevor Jones, also finished sixth in the men’s single sculls for his career best World Cup result.

Jill Moffatt and Karissa Riley placed fourth and sixth, respectively, in the non-Olympic lightweight women’s single sculls. The Canadian men’s eight had also qualified for their A final but was unable to race on Sunday due to several positive tests for COVID-19 among the crew.

Mike Woods finished first in the general classification of the Route d’Occitanie, a four-stage race contested in the southwest of France. At age 35, it is his first career stage race title as he took the victory in 14 hours 33 minutes and 48 seconds, beating out a trio of Spaniards. Woods won Saturday’s third stage to seize the yellow jersey of the leader.

Woods will take part in the Tour de France which begins July 1.