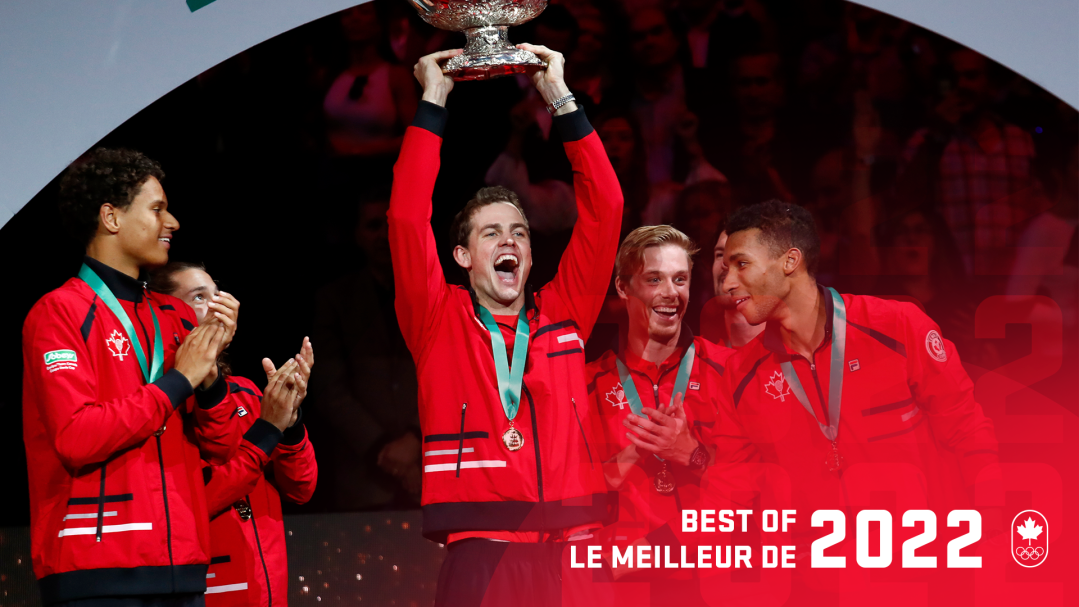 It was a celebration 109 years in the making.

In late November, Canada won the Davis Cup – the preeminent trophy in men’s team tennis –  for the first time ever.

It came more than a century after Canada made the final in its inaugural Davis Cup appearance in 1913.

It came four years after Canada had finally returned to the Davis Cup final, only to run into powerhouse Spain who had the home court advantage.

In 2022, Félix Auger-Aliassime, Denis Shapovalov, and Vasek Pospisil were determined not to suffer that second place disappointment again.

Taking advantage of a second serve

Early in the year, the odds of Canada winning the Davis Cup wasn’t just an improbability – it was an impossibility.

Without any of Auger-Aliassime, Shapovalov, or Pospisil available to play, Canada was seemingly eliminated from what’s dubbed the World Cup of Tennis with a loss to the Netherlands during the Qualifiers round in March.

But when the reigning champions from Russia were banned from competing in the fall Finals after their country invaded Ukraine, the door re-opened for Canada. As the top-ranked losing team from the Qualifiers, Canada was given a wild card entry.

They did not let that second chance slip them by.

In September’s Group Stage, Auger-Aliassime and Pospisil got the wins they needed over South Korea and Spain to advance to the Knockout Stage. Shapovalov joined them in Malaga, Spain where that trio secured a quarterfinal victory against Germany. That was followed by a semifinal win against Italy, setting up a final showdown with Australia.

After Shapovalov had lost his singles matches in the first two knockout ties, he got Canada off on the right foot in the final, earning an easy, straight sets win.

Auger-Aliassime, who had been on a glorious run throughout the fall and had become Canada’s MVP during Davis Cup play, set off the long awaited celebration with his own straight sets victory.

Those two men had been boys when they won the 2015 Junior Davis Cup for Canada, setting up some great expectations for what might be possible in the future. Just seven years later, they swapped the small trophy for a much bigger one.

What Pospisil contributed cannot and should not be diminished. A stalwart for Canada since his Davis Cup debut in 2008, he made his 27th appearance in Malaga and provided a veteran presence in the doubles matches.

That was actually the second team title Canada won in 2022. In early January, just ahead of the Australian Open, Auger-Aliassime and Shapovalov led Canada to victory in the ATP Cup.

When the calendar flipped to 2022, Auger-Aliassime looked ready to rise up the rankings. He made it to the quarterfinals of the Aussie Open and then won his first career ATP singles title in Rotterdam in February. Though he couldn’t quite replicate that success during the summer, he more than made up for it in the fall.

During the Group Stage of the Davis Cup Finals, he defeated world number one Carlos Alcarez of Spain. A week later got his first ever win against Novak Djokovic as he helped Team World claim the Laver Cup.

He followed up with a most incredible October as he won three straight tournaments, taking the singles titles in Florence, Antwerp, and Basel. He made it as far as the semifinals in his next event in Paris, his first time advancing to the semis of a Masters 1000 event since 2019. When it was all counted, Auger-Aliassime had strung together 16 match wins and boosted himself to number six in the world, his highest ATP ranking ever.

In November, he played in the ATP Finals for the first time, becoming the first Canadian to qualify for the year-end event since 2016. Though he bowed out in the round robin, he did defeat Rafael Nadal for the first time in his career.

More wins for the women

This year wasn’t just about the Canadian men, however.

In March, Leylah Fernandez won her second career WTA tournament, taking the title in Monterrey for the second straight year. She was also key in advancing Canada to the Billie Jean King Cup Finals, winning both of her singles matches during the Qualifiers round in April.

There is also the woman who is perhaps Canada’s most consistent player. Gabriela Dabrowski won three WTA doubles titles this year with two different partners.

With one of the shortest off-seasons in all sports, it will soon be time to start cheering on the Canadian stars of tennis once again, as soon as that calendar turns to 2023.