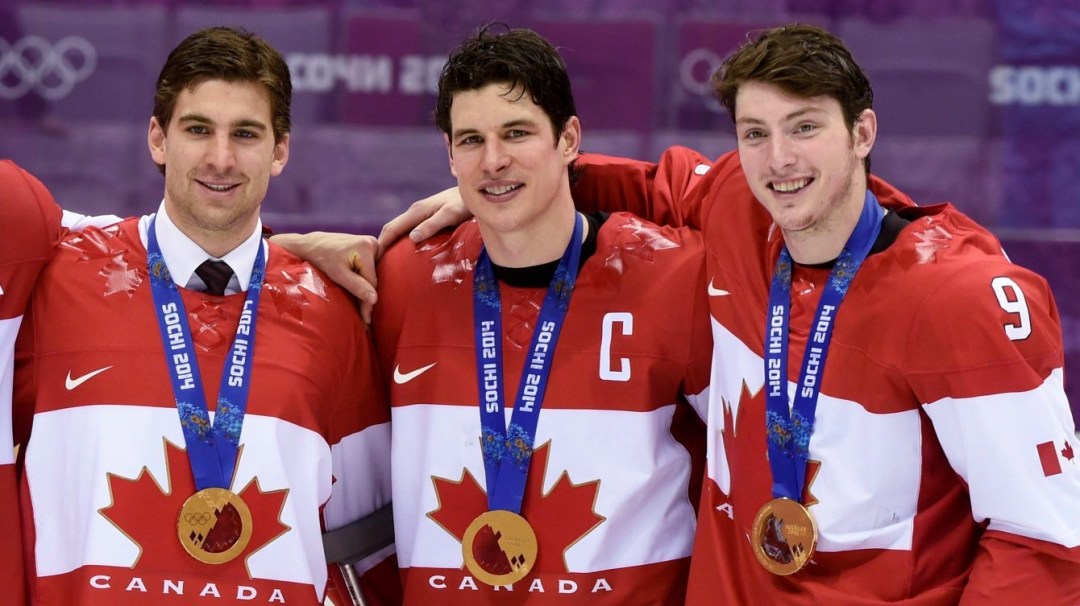 It’s been said that the Stanley Cup is among the hardest trophies to win in professional sports.

For the next two months, teams will be looking for the 16 victories that will crown them champions of the National Hockey League.

As international as hockey has become, it is still Canada’s game. This season, 44% of NHL players were Canadian, the largest percentage for any one nation (Americans accounted for 28%).

Rosters across the league were studded with Team Canada Olympians. Let’s take a look at who among them will be in the Stanley Cup Playoffs and who has a shot at joining hockey’s elite Triple Gold Club by lifting Lord Stanley’s mug:

Benn was a member of the gold medal-winning team at Sochi 2014 where he tallied two goals over six games. Benn notched the game-winner in the semifinals against the United States to give Canada a trip to the final.

Benn was picked by the Stars in the fifth round (129th overall) of the  2007 NHL Entry Draft. Despite his low selection, Benn cracked the NHL roster two years later and went on to win the Art Ross Trophy in 2015 as the league’s points leader. Benn and the Stars are all set to square off with the Nashville Predators. 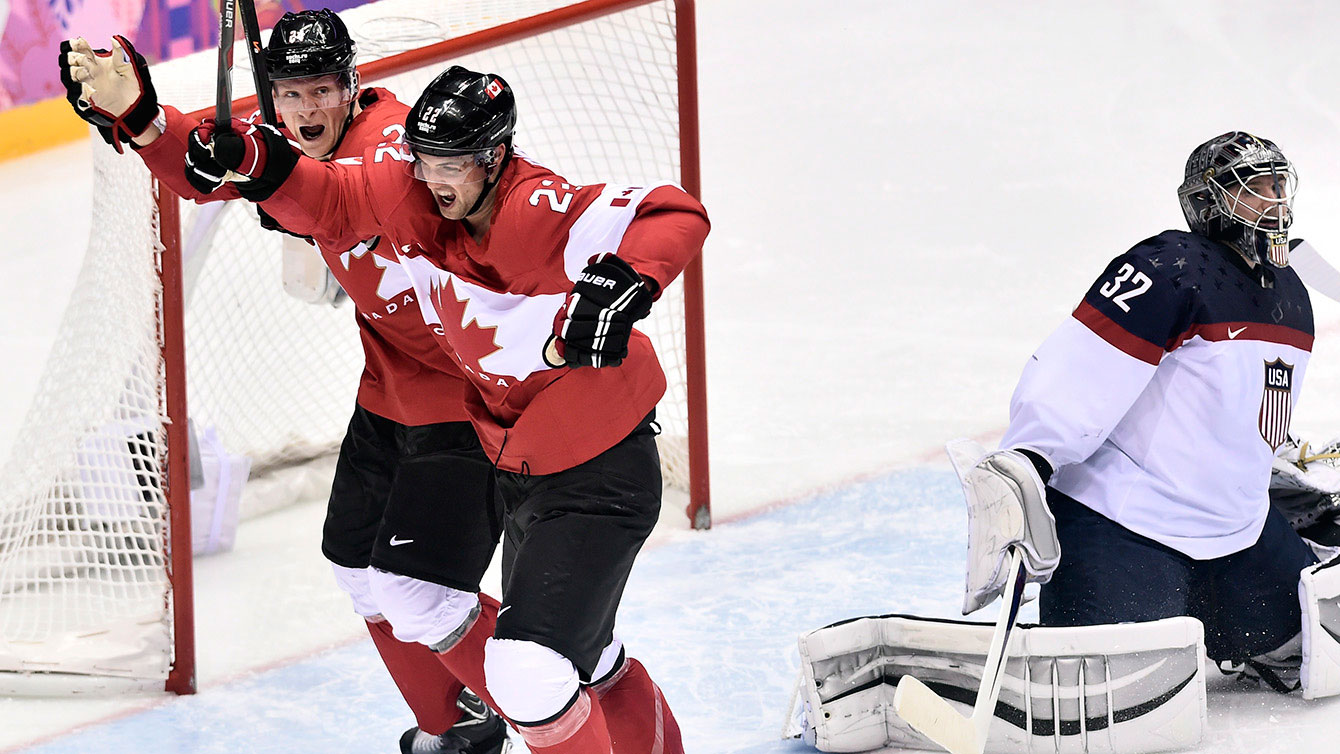 Bergeron is already a Triple Gold Club member, having won Olympic gold in 2010 and 2014, IIHF World Championship gold in 2004, and the Stanley Cup with the Bruins in 2011. Fun fact: Bergeron actually won his world title a year before he won a world junior title with Team Canada in 2005.

Bergeron and the Bruins enter the playoffs as the second seed in the Atlantic Division and are ready to reignite their rivalry against their first-round opponent, the Toronto Maple Leafs. 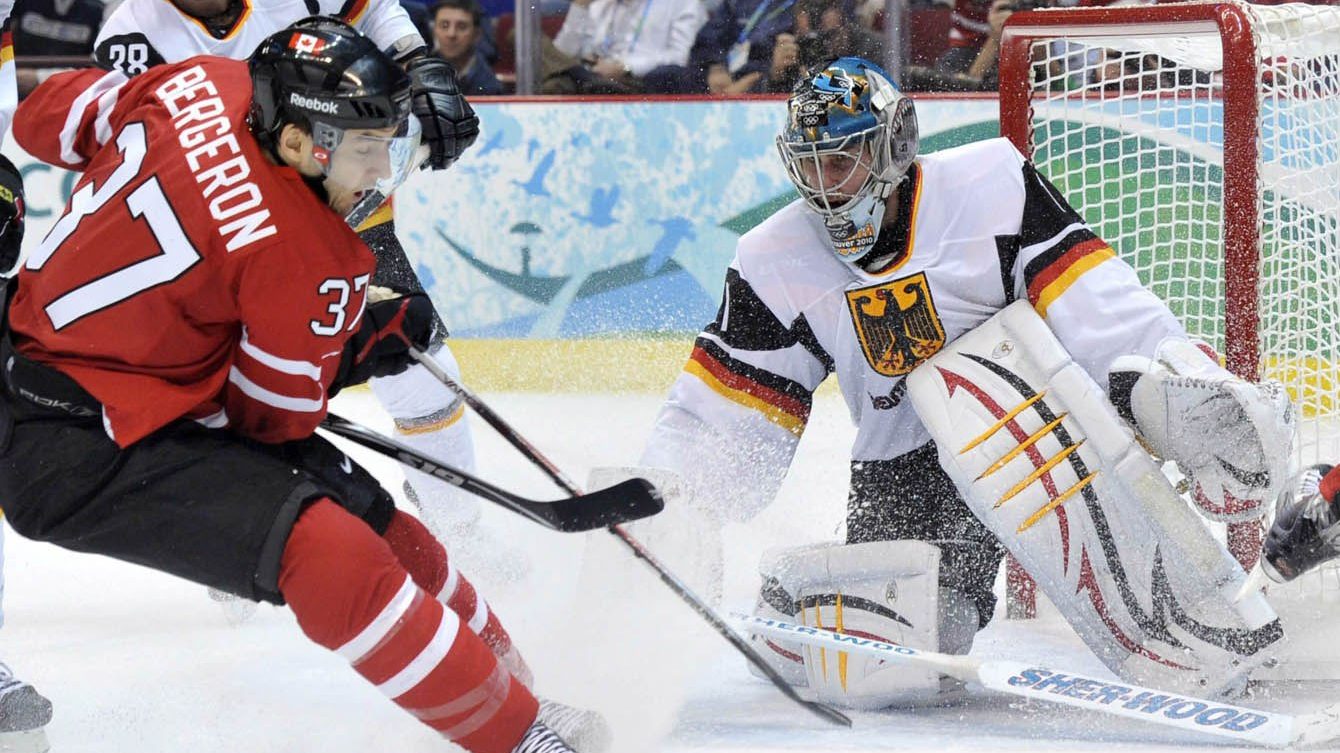 Canada’s Patrice Bergeron shoots on Germany’s Thomas Greiss as Canada’s Rick Nash flies through the air during men’s Olympic ice hockey action at the Olympic Winter Games on Tuesday, February 23, 2010. Canada’s Sidney Crosby missed on a penalty shot that was called on the play. THE CANADIAN PRESS/Roger Hallett

Sidney Crosby… where do we even start? The Triple Gold Club member is one of the biggest household names in Canada. Fans will never forget his “Golden Goal” to secure victory for Canada at Vancouver 2010, the first of his back-to-back Olympic gold medals.

The Penguins struggled at the start of the season, spending most of it outside of the playoff picture looking in. But, Crosby did what he does best and has led the Penguins into the post-season. We all know what Crosby is capable in the playoffs – count those three Stanley Cup rings won before he turned 30. Sid and the Penguins face the New York Islanders in round one. 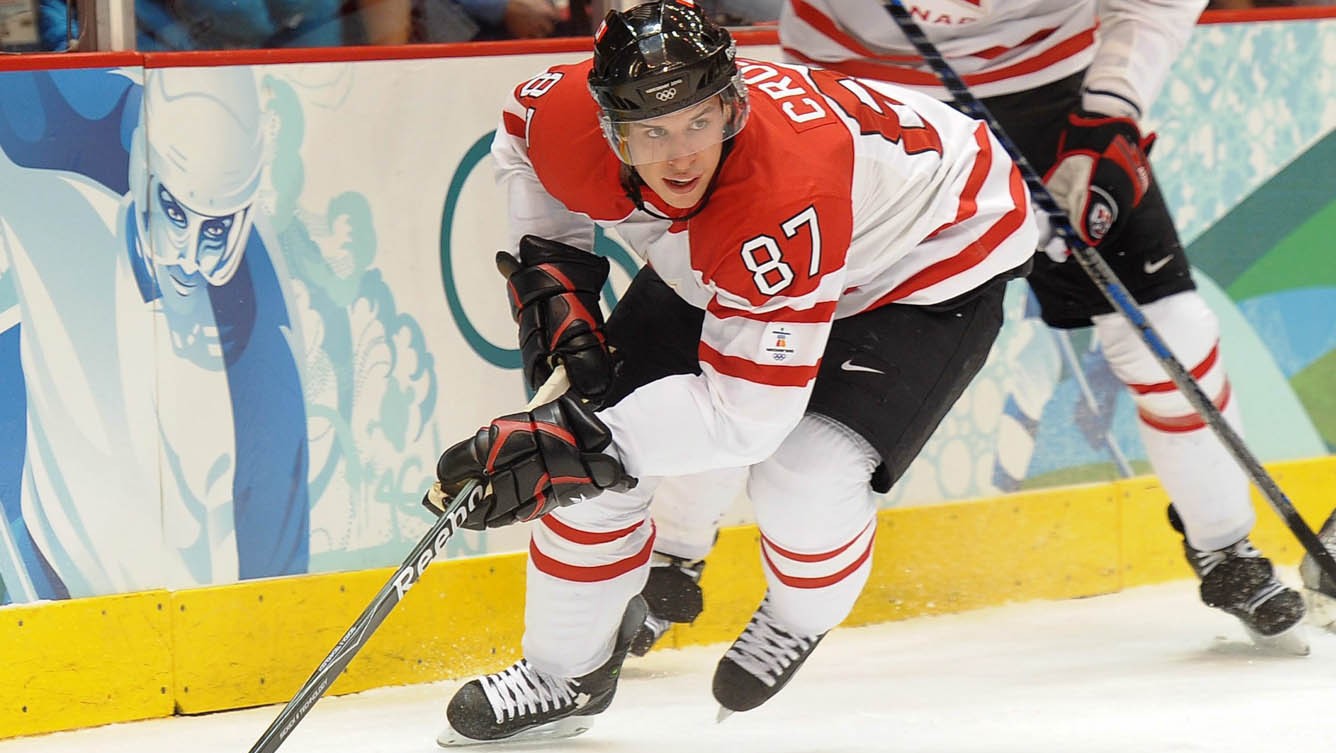 Canada’s Sidney Crosby heads up the ice with the puck during the first period of the semi-final game of men’s Olympic hockey at Canada Hockey Place Friday Feb. 26, 2010 at the 2010 Vancouver Olympic Winter Gamesr. THE CANADIAN PRESS/Scott Gardner

All Duchene needs to join the Triple Gold Club is to see his name engraved on the Stanley Cup. He won his Olympic gold with Team Canada at Sochi 2014.  He’s also missed the NHL playoffs a few times, giving him six opportunities to compete at the IIHF World Championships where he won gold twice (2015, 2016).

Duchene began the season with the Ottawa Senators but was traded to the Blue Jackets near the deadline. A soon-to-be free agent, Duchene will look to make a big impact during the playoffs. Columbus enters as the second wild card seed and faces the President’s Trophy winners, the Tampa Bay Lightning. 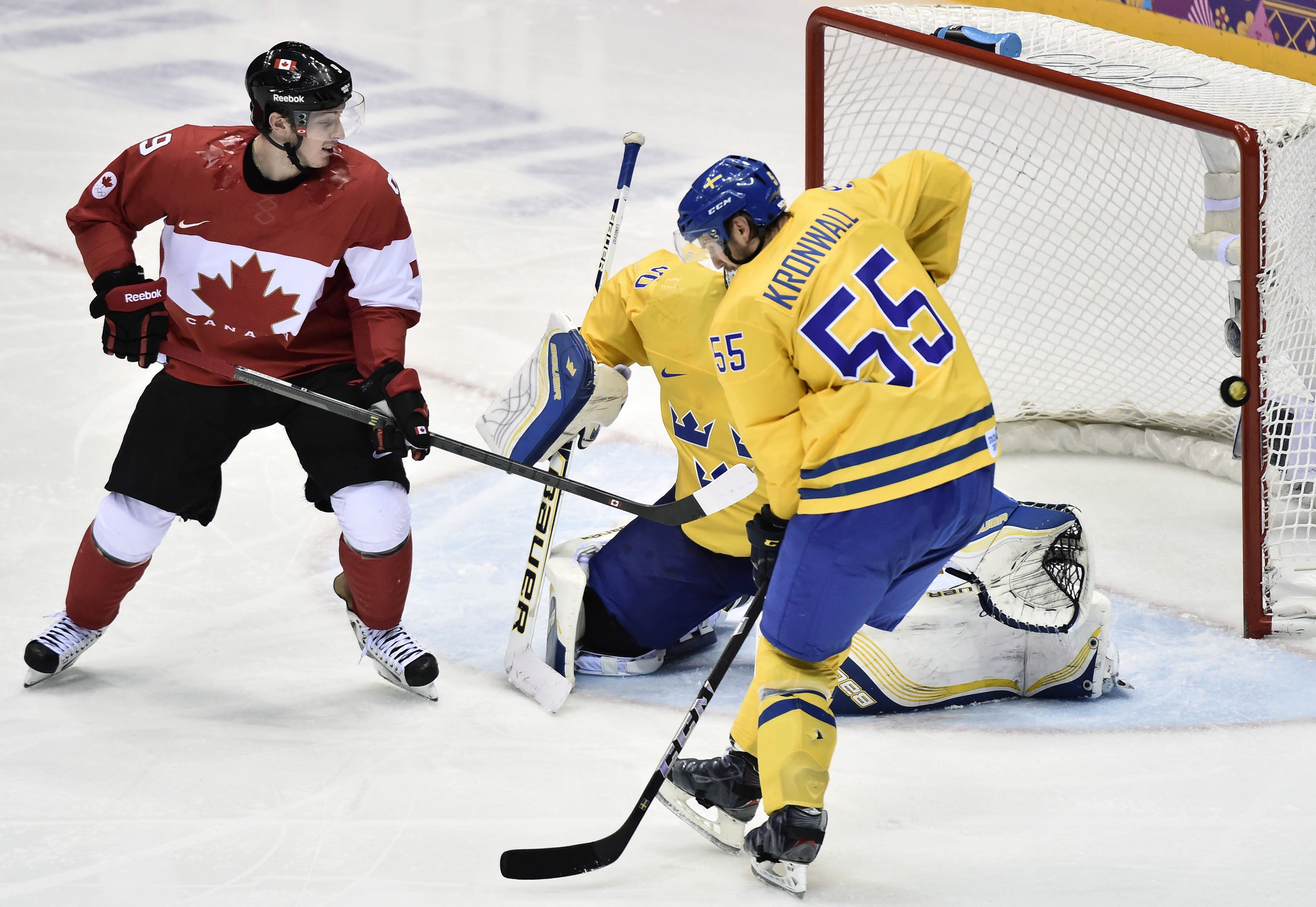 Canada forward Matt Duchene watches a puck go off the post past Sweden goalie Henrik Lundqvist as defenceman Niklas Kronwall looks on during third period action in the gold medal game at the 2014 Sochi Winter Olympics in Sochi, Russsia, on Sunday, February 23, 2014. THE CANADIAN PRESS/Nathan Denette

Marleau is another prospective member of the Triple Gold Club. All he’s missing is the Stanley Cup, which (as all Leafs’ fans lament) Toronto hasn’t won since 1967. Marleau won his IIHF World Championship gold in 2003 before back-to-back Olympic gold medals in 2010 and 2014.

At 39, Marleau is in the latter stage of his career after being a marquee player in San Jose for 19 seasons. He signed with the Leafs as a free agent in 2017 and they will be looking for his veteran presence to make a deep run in the playoffs this year. First up, the Boston Bruins. 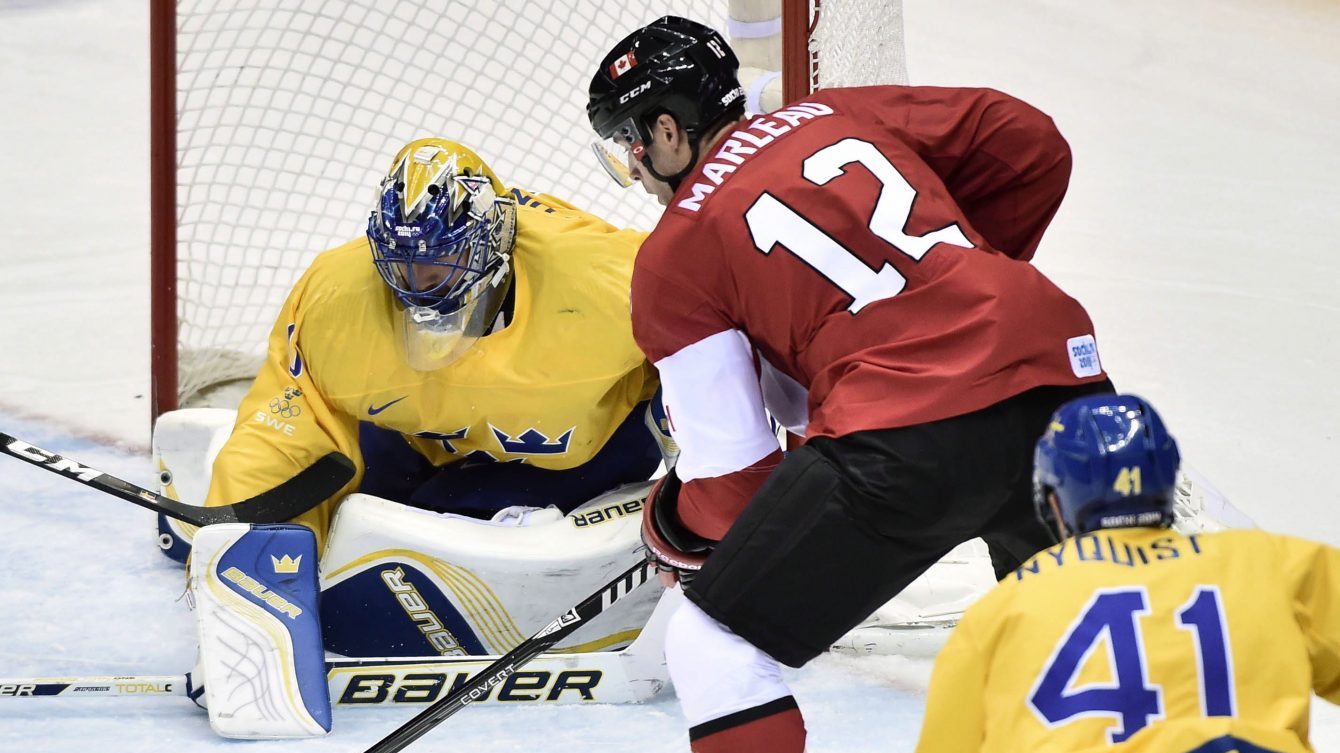 Tavares took home Olympic gold with Team Canada at Sochi 2014. As a talented teenager, he was granted exceptional status into the Ontario Hockey League and proved he was worth it when he won back-to-back gold medals with Team Canada at the IIHF World Junior Championship in 2008 and 2009.

Tavares made a splash this past off-season when he signed a megadeal worth $11 million per season with his hometown Toronto Maple Leafs, allowing him to play out a childhood dream. He went on to record a personal season high in goals with 47. Tavares looks to continue that success in the playoffs. 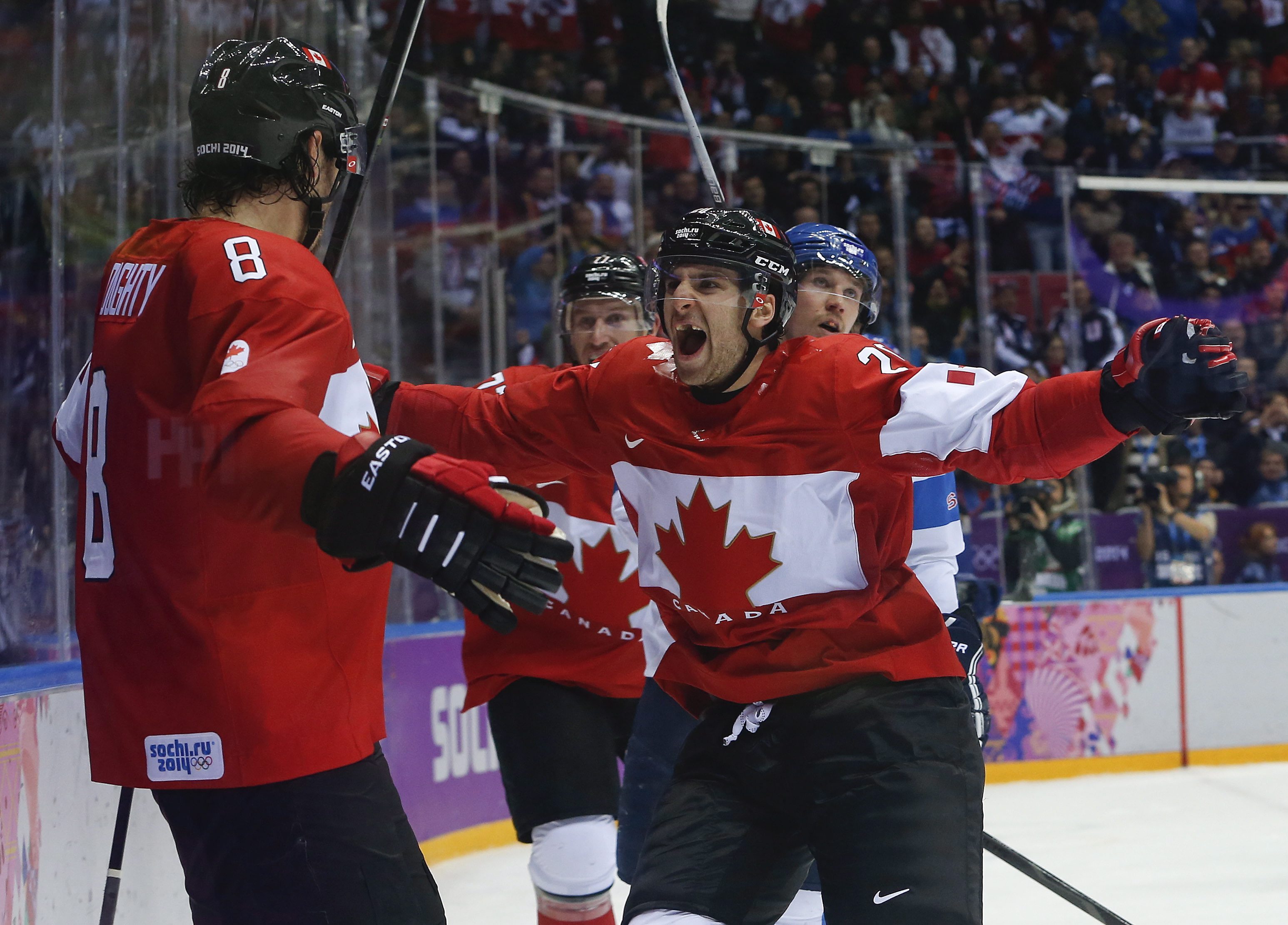 Back when Thornton didn’t have a “wild man” beard, he took home Olympic gold at Vancouver 2010 after making his Olympic debut Turin 2006.  He’s also got a world championship silver medal on his resume from 2005.

Thornton has had a great NHL career that began in Boston when the Bruins made him the first overall draft pick in 1997. Now 39, Thornton is looking to capture a Stanley Cup with the Sharks before he retires. In order to do that, Thornton and the Sharks have to get through the Vegas Golden Knights first. 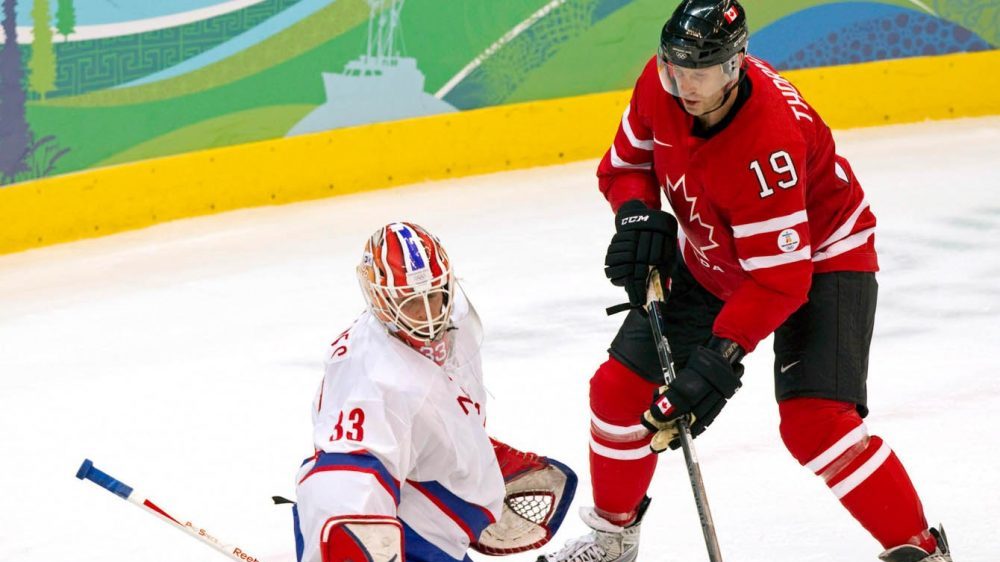 Bouwmeester is in his 16th NHL season and seventh with the St. Louis Blues. The team set a franchise record win streak this year with 11 consecutive victories. St. Louis will begin the playoffs in Winnipeg’s “whiteout”, one of the toughest playoff atmospheres to play in. 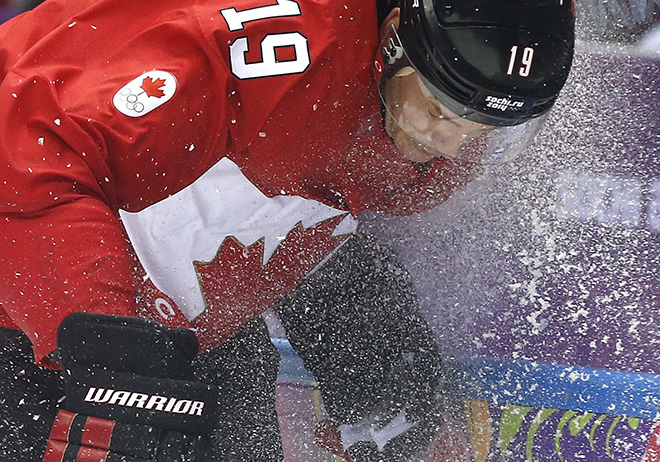 Canada defenseman Jay Bouwmeester crashes the boards against the USA during the second period of a men’s semifinal ice hockey game at the 2014 Winter Olympics, Friday, Feb. 21, 2014, in Sochi, Russia. (AP Photo/Julio Cortez)

Hamhuis is just a Stanley Cup ring away from joining the Triple Gold Club. He has previously won world championship gold twice (2007, 2015) and gold at Sochi 2014.

The 36-year-old defenceman has been limited in his usage this year due to a leg injury. However, Hamhuis was recently activated by the Predators and may be used during the playoffs for his veteran experience. The Predators first round match up is against the Dallas Stars. 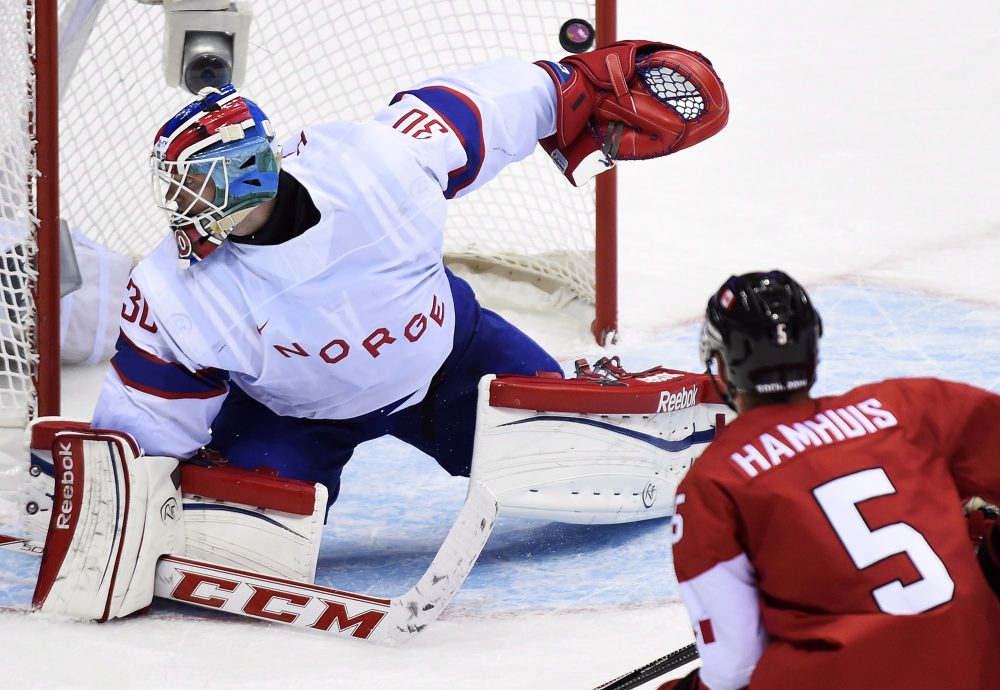 Pietrangelo was solid on the blueline for Team Canada at Sochi 2014 en route to Olympic gold. He’s also worn the Team Canada jersey at the 2009 and 2010 IIHF World Junior Championships and the 2016 World Cup of Hockey.

Pietrangelo has been a member of the St. Louis Blues for all nine of his NHL seasons and was named the team’s captain in 2016. He joins Olympic teammate Jay Bouwmeester and the rest of the Blues on their quest to hoist the Cup this year. 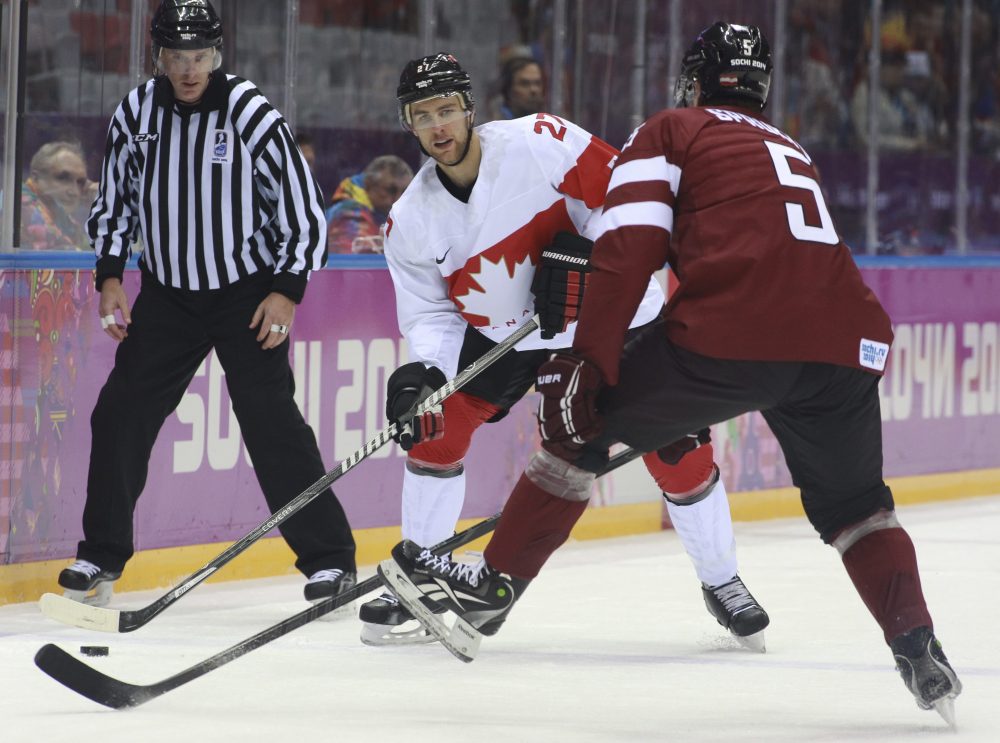 One of hockey’s biggest personalities, Subban was on Team Canada’s roster at Sochi 2014 and received the Olympic gold medal with his teammates.

In a trade that shook the hockey world, Subban was sent from the Montreal Canadiens to the Nashville Predators in exchange for his Sochi 2014 teammate, Shea Weber. Amidst more trade rumours last off-season, Subban remained with the Predators and hopes to have a crack at the Cup with last season’s President’s Trophy winners. 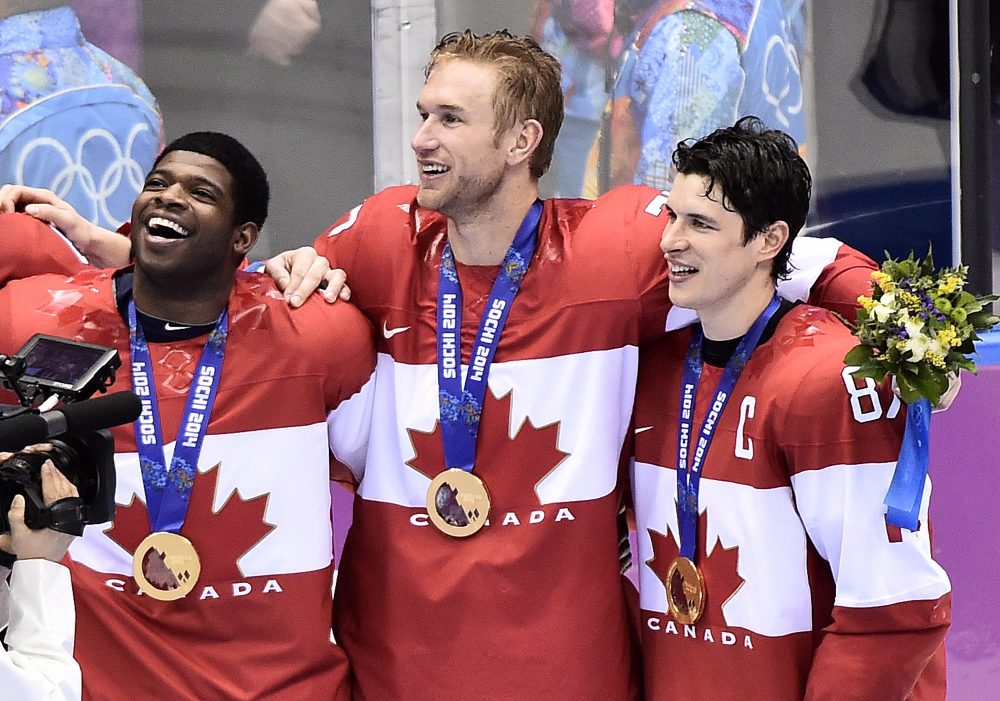 Vlasic has been a Shark since he was drafted in the second round (35th overall) in 2005. Initially an offensive defenceman, Vlasic balanced his game to become a two-way puck-moving defenceman. The Sharks should have no problems on their blue line for the playoffs after acquiring Erik Karlsson in September to go along with Vlasic and Brent Burns. Vlasic and Thornton start their NHL playoffs against the Golden Knights. 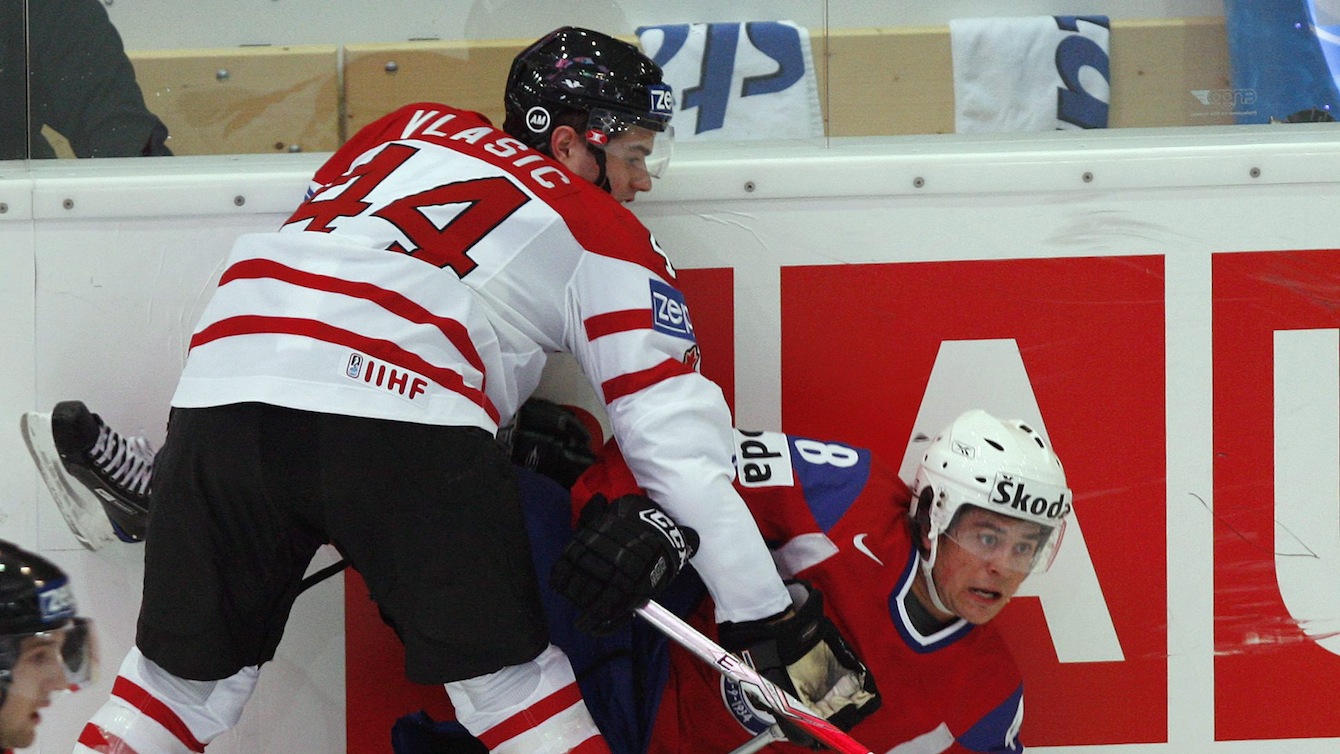 Fleury was destined for success when in 2003 he became the second goalie ever taken first overall in the NHL Entry Draft. Fleury has represented Canada on three separate occasions, at the 2003 and 2004 IIHF World Junior Championships and the Vancouver 2010 Olympic Winter Games.

Fleury was a key member of the Pittsburgh Penguins for 13 seasons, backstopping them to three Stanley Cups (2009, 2016, 2017). One of the most sought-after choices in the 2017 Expansion Draft, Fleury became the face of the Vegas Golden Knights and led them to the Stanley Cup Final in the team’s inaugural season. This year, Fleury has remained amongst the best goalies in the NHL, leaving Vegas is poised for another deep playoff run. 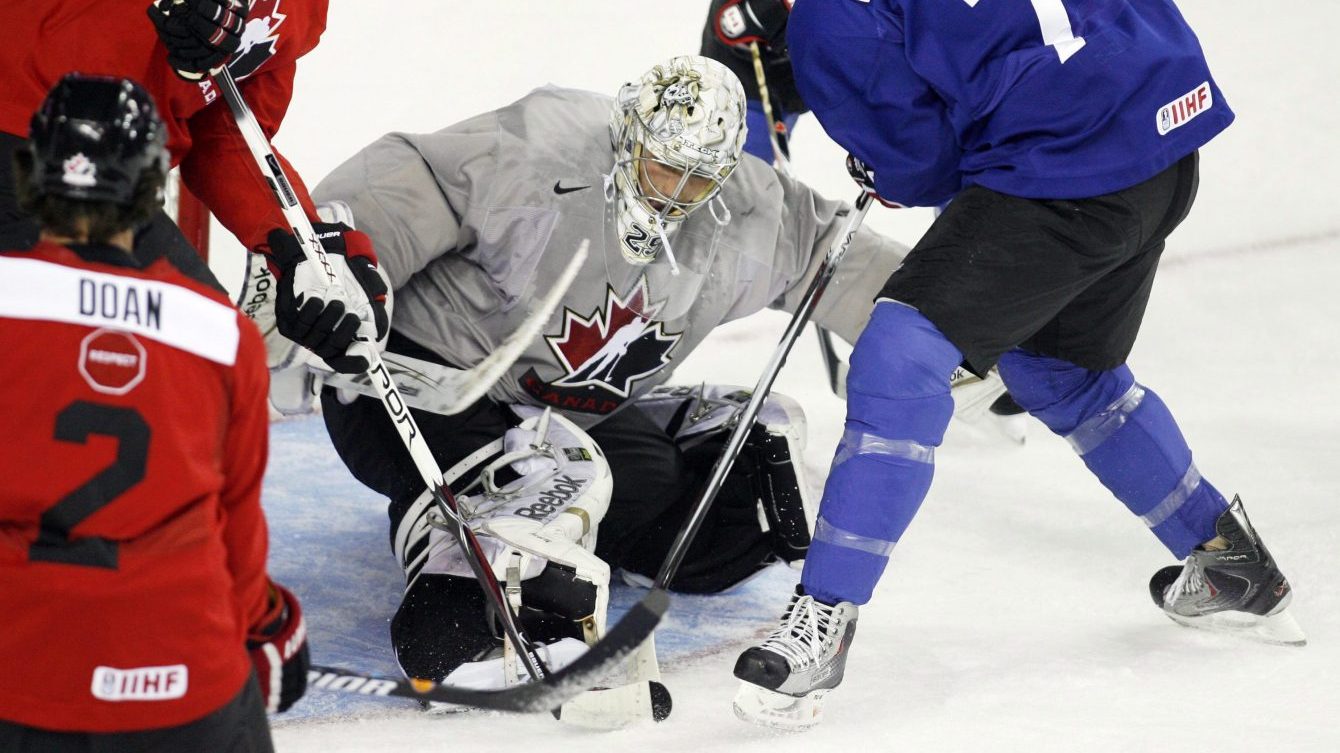 Smith was one of Team Canada’s goaltenders at Sochi 2014 where he received his Olympic gold medal. He went on to win gold at the 2015 IIHF World Championship where he posted a 1.50 goals against average and .930 save percentage.

Smith was originally drafted in 2001 by the Dallas Stars but did not break into the NHL until 2006. Smith is now a member of the Calgary Flames who finished this season first in the western conference and second in the entire league. If the Flames can clinch the Stanley Cup, Smith would join the Triple Gold Club. Calgary’s first round opponent is the Colorado Avalanche. 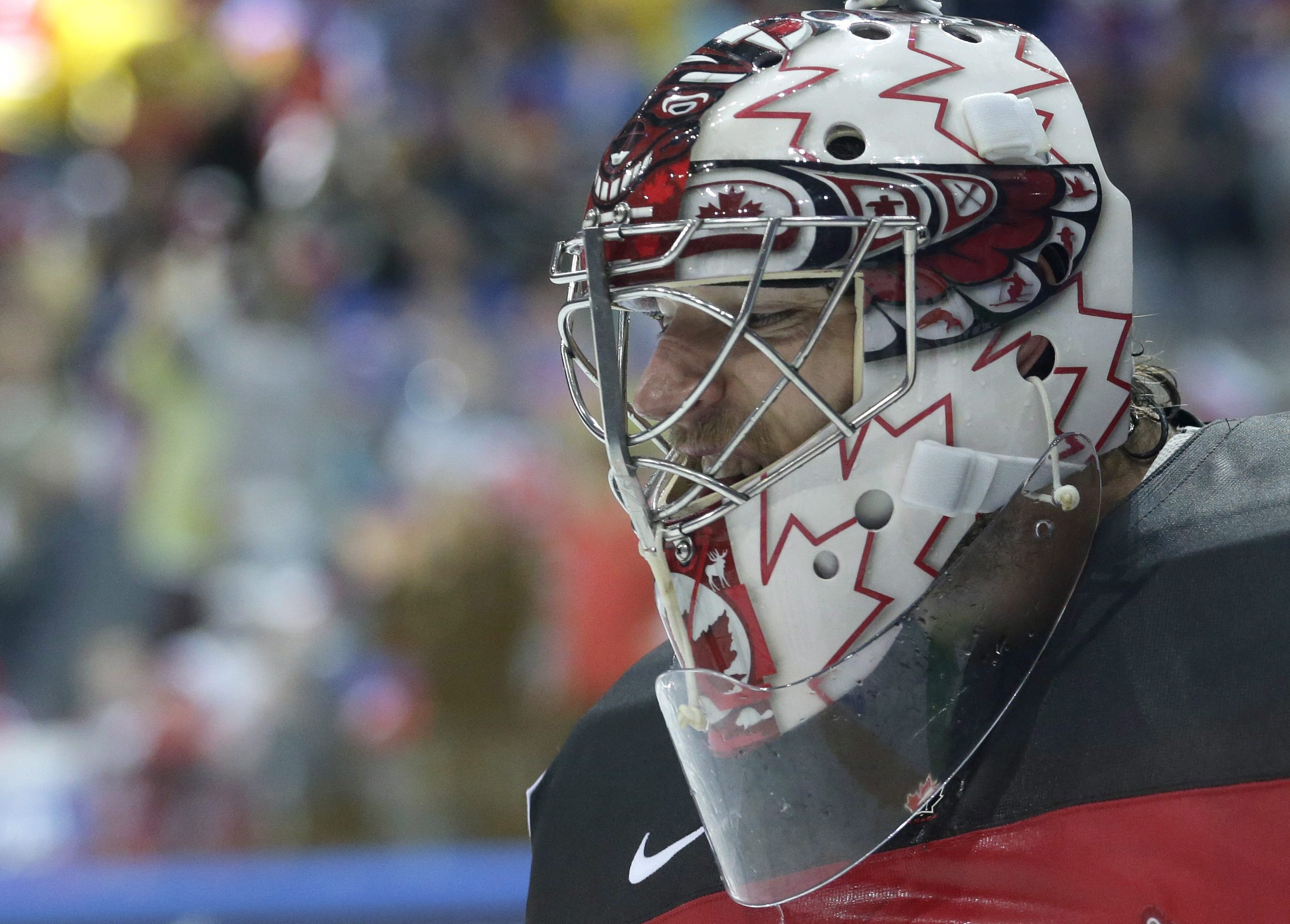