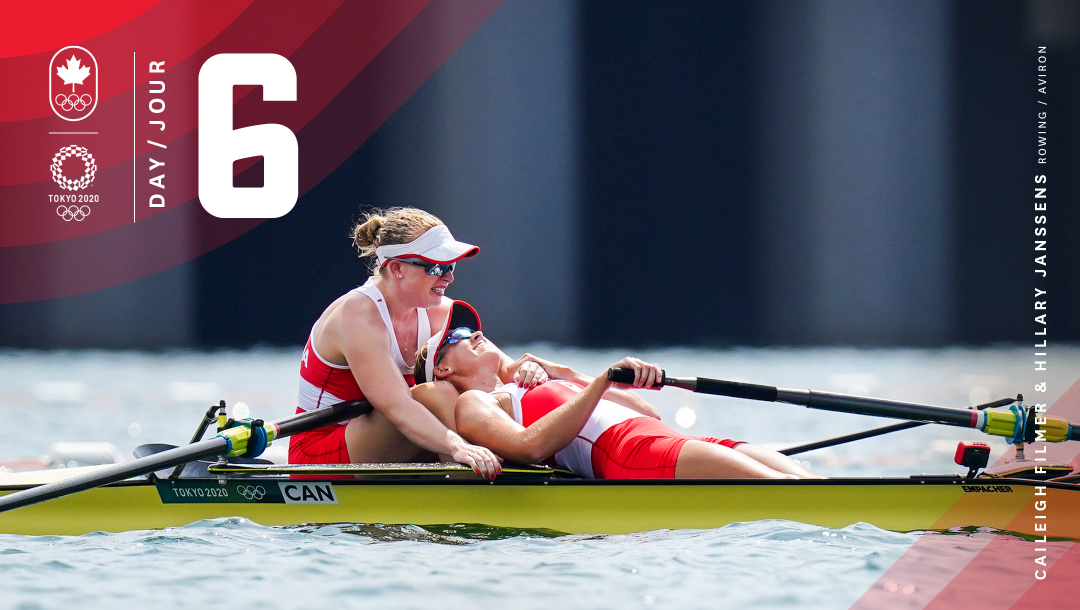 There was a lot to get excited about for Team Canada on Day 6.

Caileigh Filmer and Hillary Janssens won the bronze medal in the women’s pair for Canada’s first podium in rowing at Tokyo 2020. It was Canada’s first medal in this event since Barcelona 1992. The Canadians in the men’s pair final, Conlin McCabe and Kai Langerfeld, came incredibly close to their own medal, but finished fourth by 0.55 of a second.

The lightweight double sculls tandems of Jill Moffatt and Jennifer Casson as well as Patrick Keane and Maxwell Lattimer competed in B finals and finished 12th overall and 10th overall, respectively.

Carling Zeeman and Trevor Jones raced in the semifinals of the women’s and men’s single sculls and finished fifth and sixth, respectively, meaning they will race in the B finals.

One day after becoming Canada’s most decorated summer Olympian ever, Penny Oleksiak was looking to add to her medal haul in the women’s 4x200m freestyle relay with teammates Summer McIntosh, Rebecca Smith, and Kayla Sanchez. They finished fourth but set a Canadian record time of 7:43.77 in the process.

Though Ellie Black had to unfortunately withdraw from the women’s individual all-around final due to an injury sustained in training, Canada was still represented by Brooklyn Moors, who finished an impressive 16th in her first Olympic final.

The women’s foil team of Alanna Goldie, Jessica Guo, Eleanor Harvey and Kelleigh Ryan started their day with a 45-29 quarterfinal loss to France. After defeating 45-33 Hungary in the 5-8 classification round, they moved on to play Japan to determine fifth and sixth place. With the 45-31 win, they finish fifth for Canada’s best ever Olympic result in the event.

The last Canadian judoka to hit the tatami was Shady El Nahas in the men’s 100kg event. After winning his first two matches, he lost in the quarterfinals to world number one Varlam Liparteliani of Georgia, putting him into a repechage match. He won that to earn a shot at bronze but lost by waza-ari to world number two Jorge Fonseca of Portugal.

The Pool A match between Sarah Pavan and Melissa Humana-Paredes defeated the fourth-ranked Swiss team of Anouk Verge-Depre and Joana Heidrich 2-0 (21-13, 24-22) to boost their record to 3-0. By finishing atop their pool, they advance to the Round of 16.

Heather Bansley and Brandie Wilkerson were facing world number ones Agatha and Duda of Brazil in their final Pool C match. Both teams came in with 1-1 records, but the Brazilians were unfortunately the better team on the night, winning 2-0 (21-18, 21-18). Bansley and Wilkerson finish third in their pool and are looking at playing a lucky loser match to get into the Round of 16.

Captain Ghislaine Landry posted a try and went 4 for 5 on conversions to lead Team Canada’s women’s rugby sevens team to a 33-0 victory over Brazil in the first of two sessions at Tokyo Stadium. The second session wasn’t kind to Canada as a bad start led to a 26-12 loss to Fiji. Canada, looking to improve upon the bronze medal they won at Rio 2016, will take on France next.

After a tough opening game loss to Serbia, Toronto’s Natalie Achonwa and Bridget Carleton recorded 14 and 16 points, respectively, leading Canada to a 74-53 win over South Korea in preliminary round action on Day 6. Next up for the Canadian women’s team will be 2016 Rio bronze medallist Spain.

Drew Mechielsen and James Palmer competed in the quarterfinals of the women’s and men’s BMX races. Mechielsen finished fourth in her heat after the three runs to advance to the semifinals while Palmer was sixth in his heat and will not move on.

The men’s tournament featuring Corey Conners and Mackenzie Hughes began with the first round. Both finished tied for 20th at two-under par, six strokes back of the leader.

Mark Pearson scored Canada’s lone goal in a 9-1 loss to Belgium, who lead Group B with a 4-0 record. The Red Caribou, who will not advance past the preliminary round, will try to earn a win in their final game of Tokyo 2020 tomorrow against South Africa, who entered Day 6 action with an 0-3 record.

Five Canadian boats were on the water. With a fifth place finish in the eighth race of the Laser Radial, Sarah Douglas moved up the leaderboard and is now sitting eighth overall in the fleet. Tom Ramshaw sits in 14th place overall in the Finn. Jacob Saunders and Oliver Bone are 16th overall in the 470, and William Jones and Evan DePaul are 19th in the 49er. Nikola Girke is in 23rd place overall in her RS:X windsurfer.

Lynda Kiejko started her second event of the Games, the women’s 25m pistol. She is currently 41st after the qualification precision round. 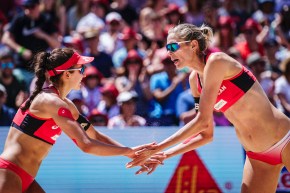 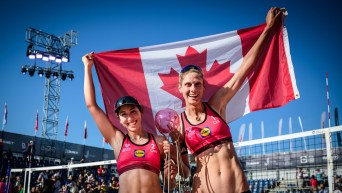