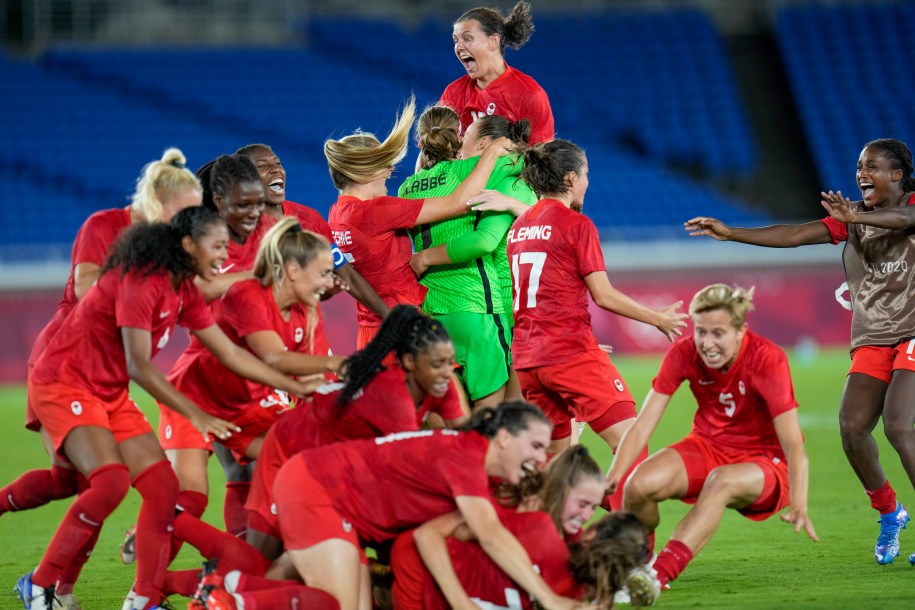 When Christine Sinclair began playing for Canada, Julia Grosso had not yet been born.

Yet in the women’s soccer final at Tokyo 2020, it was the 20-year-old Olympic debutante who scored the decisive penalty kick to lift Team Canada to an historic gold medal.

Sinclair wasn’t part of the shootout, having been substituted out of the game late in the second half. It was the first time in the captain’s storied career that she’s been forced to serve as a spectator while her team went to penalty kicks.

“I hated being on the sideline because it’s so stressful, but I’m overwhelmed with pride for this team,” she said after the match. “It’s been quite a journey in this tournament and it’s an honour to be part of this group.”

Sinclair played her part in this tournament, starting in five of Canada’s six matches. She scored in the tournament-opening draw against Japan, and was the one to earn a crucial penalty kick in the gold-medal final.

But the 38-year-old didn’t have to do it alone. In fact, Canada now sits atop the Olympic mountain not because of any one player, but because of a cohesive team effort.

Jessie Fleming was the one to convert that second-half penalty kick in the final, just like she did in the semifinal against the United States. The central defensive duo of Kadeisha Buchanan and Vanessa Gilles (who earned her way into a starting position halfway through the tournament) was rock solid.

Nichelle Prince and Janine Beckie showed a good connection in the attack, while Deanne Rose gave fits to opposing defenders. Ashley Lawrence‘s composure was a sight to behold, while Quinn solidified their status as an indispensable part of the Canadian midfield.

And while Grosso’s penalty kick was the decisive one, fellow 20-year-olds Jordyn Huitema and Jayde Riviere could also have been called into action, had the shootout gone any longer.

Beyond being gold medallists, those players have something else in common: none of them will yet be 30 years old at Paris 2024.

But right now, they’re not looking ahead to defending their gold. They’re looking back at everything that Sinclair has done to bring the program to where it is today.

“She’s the GOAT, she’s the greatest of all time,” said Buchanan. “More importantly, she’s just a true captain and a true friend. … There’s a lot to take away from her, she’s such a great leader.”

Quinn remembers being a kid and watching Sinclair compete for Canada back at the 2003 FIFA Women’s World Cup.

“It feels incredible, Sinc is someone I’ve looked up to for so long,” they said. “All of our veteran players, I think that’s something that was at the forefront of our minds as younger players on the team: we want to give it to them.”

Sinclair joins Desiree Scott and Sophie Schmidt as three-time Olympic medallists, with the trio having won bronze at London 2012 and Rio 2016. Schmidt, who also competed alongside Sinclair at Beijing 2008, knows as well as anyone what the captain has meant to the program.

“She inspires everyone, not just young girls, to be their best self,” she said. “She’s just this pure human, and everyone can relate and buys in and loves it. It’s just very Canadian.”

Schmidt, like Sinclair, had to watch the gold-medal shootout from the sideline. But she was confident about Canada’s chances, thanks to their emphasis on practicing penalty kicks since the beginning of training camp — not to mention the steady hands of goalkeeper Stephanie Labbé.

“Steph has been absolutely clutch throughout this whole tournament,” said Schmidt. “We knew we had it in us and we just needed to stay true to our principles.”

Labbé made two saves in the gold-medal shootout, and was one of Canada’s standout performers in a tournament where the margins between victory and defeat were incredibly thin.

“I’m just so happy and proud that all the hard work has allowed me to step up in different moments for this team when I’ve been called upon,” said Labbé.

“It just brings you back to those gruelling days when you’re grinding in the gym … I think back to the hardest of days when I didn’t even want to get out of bed. But I pushed myself and I kept going and all of that came to fruition today.”

“It feels so great,” said Labbé. “These are my best friends in the whole world. We’ve had some incredible lows together, some incredible highs and this one is going to be a day that we cherish forever and to do that with the people that you love is absolutely indescribable.”

Sinclair, the sport’s all-time leading scorer in national-team play, knows all too well about those highs and lows.

“We fought today, and I’m so proud of that,” said Sinclair. “Our goal was to change the colour of the medal and we landed on the top of the podium, which isn’t bad.”

Understated as ever, even after two decades of blood, sweat and — particularly after the gold-medal victory — tears.

It was Sinclair and her contemporaries who provided the inspiration to bring Canada to this point. Now, a new generation has taken the torch and will continue running with it, all the way to Paris, as Olympic champions.