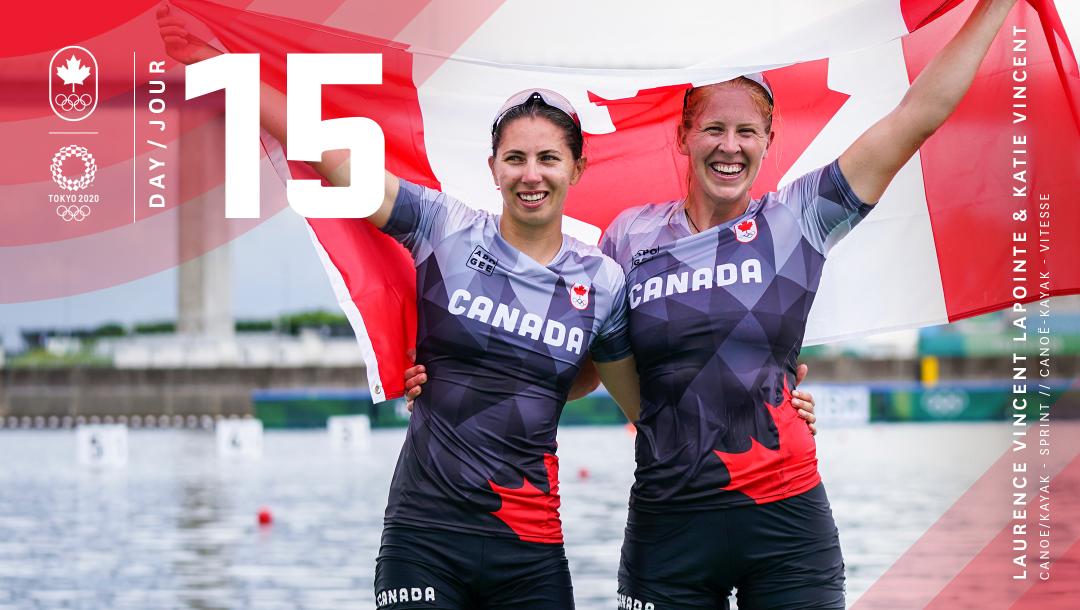 Laurence Vincent Lapointe and Katie Vincent paddled to the podium while Kelsey Mitchell and Lauriane Genest had to race each other for a spot in the sprint semifinals at the velodrome.

You can check out the complete schedule of Canadians who competed today at the bottom of this page and read on for the details of what happened in each sport.

Laurence Vincent Lapointe and Katie Vincent paddled to a bronze medal in the women’s C-2 500m, the first Olympic final ever for the event. In fifth place at the midway mark, the two stuck to their plan and got themselves into a podium position — and promptly celebrated by falling out of their boat and into the water.

Connor Fitzpatrick started his day with the semifinals of the men’s C-1 1000m and ended up racing in the B final where he finished sixth, for 14th overall. The men’s K-4 500m crew finished fifth in their semifinal and did not advance to the final.

Action at the velodrome continued with Lauriane Genest and Kelsey Mitchell competing in the sprint. They both advanced into the quarterfinals, where they were pitted against each other in a best two-out-of-three races showdown. Mitchell won the first two to advance into the semifinals, meaning she will get the chance to race for a medal on the final day of the Games.

“Unfortunately I had to race against my teammate, who I do not race against but do train with every single day. We joked about saving our match sprints for the Olympics. It was preferably in the final, but unfortunately we’re doing quarters,” said Mitchell. “I’m going out there and giving it my all every single race and so I really hope all the hard work pays off and shows tomorrow.”

Hugo Barrette and Nick Wammes were back for the first round of the men’s keirin. Barrette looked to have won his heat, but it was re-run after two competitors crashed. He then crashed himself and ended up in a repechage where he finished fourth and did not advance to the quarterfinals. Wammes was also eliminated in the first round repechage. Michael Foley and Derek Gee raced in the men’s Madison but were lapped and did not finish.

Nathan Zsombor-Murray competed in the semifinals of the men’s 10m platform, aiming to be among the top 12 to advance to the final later in the day. He had a great start, earning the highest score on the first dive of the day, but unfortunately he also had a couple of misses and ended up missing the final by one spot.

The penultimate day of competition at Tokyo 2020 began with the women’s marathon in Sapporo. Malindi Elmore was impressive, finishing ninth for the second-best Canadian result ever, behind only the eighth-place finish recorded by Sylvia Ruegger in the very first women’s Olympic marathon at Los Angeles 1984. A middle distance track athlete when she made her Olympic debut at Athens 2004, Elmore retired in 2012 and went on to compete in triathlons before deciding in 2019 to take on the challenge of the marathon and making her return to the Olympic Games.

Natasha Wodak finished 13th, marking the first time that Canada has had two women finish in the top-15 of the Olympic marathon. Dayna Pidhoresky came through the finish line in 73rd place, a remarkable achievement considering she had to quarantine in her hotel room for 14 days after arrival in Japan and was unable to train with the rest of the Canadian athletics team because she was a considered a close contact to someone on her flight who had tested positive for COVID-19.

During the evening session at the Olympic Stadium in Tokyo, Canada came within six-tenths of a second of the podium in the women’s 4x400m relay as the quartet of Alicia Brown, Madeline Price, Kyra Constantine and Sage Watson finished fourth behind the United States, Poland and Jamaica. That matches their result from Rio 2016. Andrea Seccafien raced in the women’s 10,000m and finished 14th in 31:36.36.

The artistic swimming competition concluded with the Team Free Routine. Canada finished in sixth place, just a tenth of a point behind fifth-place Italy.

After losing his opening match in the 97kg event to reigning Olympic champion Kyle Snyder, Jordan Steen got a second life in the repechage when Snyder advanced into the final. He lost 4-2 to Italian Abraham de Jesus Conyedo Ruano.

Daniel Gaysinsky competed in the Olympic debut of karate in the men’s +75kg event. In his four pool matches, he recorded one win, one draw and two losses and did not advance to the semifinals.

In the final round of the women’s tournament, Brooke Henderson shot a four-under par 67 to finish in a tie for 29th. Alena Sharp ended up in 49th place at five-over par.

The Canadian women played their final game of the tournament against China and won 16-7 to finish in seventh place.