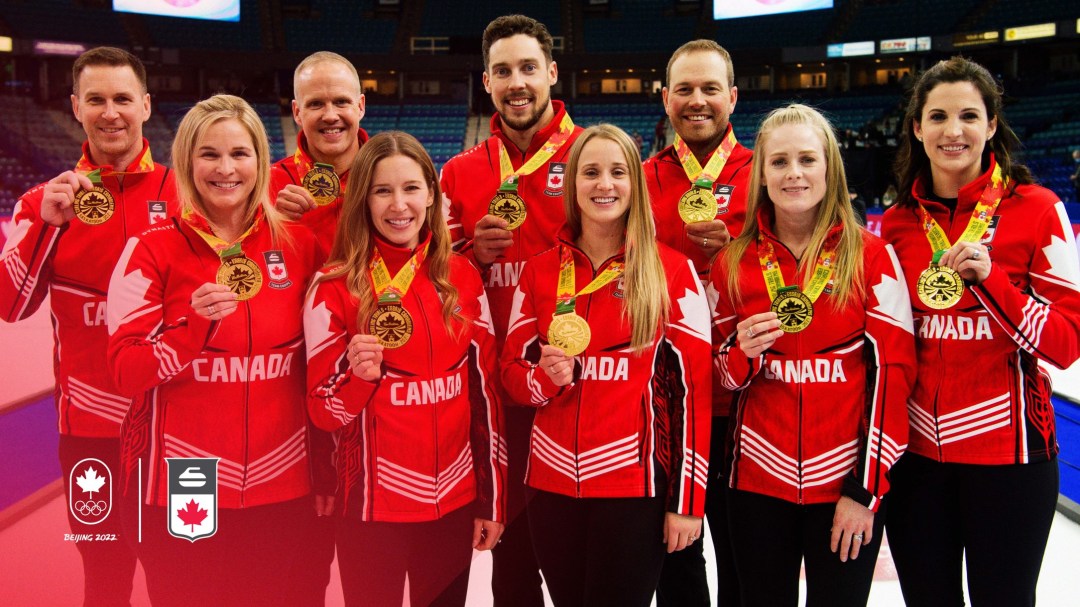 After nine days of intense action on the pebbled ice in Saskatoon, two teams were left standing to take on the mantle of being Team Canada in the men’s and women’s curling tournaments at Beijing 2022.

That was followed by Team Gushue — which includes skip Brad Gushue, third Mark Nichols, second Brett Gallant, and lead Geoff Walker — getting the better of Team Brad Jacobs in the men’s final on Sunday night.

On Monday morning, the two Beijing-bound squads received their official Team Canada lululemon jackets as the magnitude of what they had achieved truly settled in. They are the first group of athletes to be nominated to Team Canada for Beijing 2022.

Jones, Lawes, and McEwen won gold together at Sochi 2014. They posted a perfect 11-0 record as they won Canada’s first women’s Olympic curling gold medal since Nagano 1998. They were the first women’s curling team to go undefeated in Olympic competition.

At 47 years old, Jones is projected to become Canada’s oldest female Winter Olympian ever. Should she win a medal, she would be the oldest woman from any country to stand on a Winter Olympic podium. Jones brings with her the added experience of winning two world titles in 2008 and 2018 as well as world silver in 2015 and world bronze in 2010. She also owns six national titles.

At PyeongChang 2018, Lawes became the first female Canadian curler to earn two Olympic gold medals as she won the first ever Olympic mixed doubles tournament with partner John Morris. No curler from any country has ever won more than two Olympic medals.

Peterman is set to make her Olympic debut after joining Team Jones for the 2018-19 season. Her big tournament experience includes an appearance at the 2016 World Championships. Weagle competed in her first Olympic Games at PyeongChang 2018 with Team Homan. She joined Team Jones to form a five-player rotation ahead of the 2020-21 season.

Gushue and Nichols are headed back to the Olympic Games for the first time in 16 years. Only hockey player Petr Nedved has had a longer gap between Winter Olympic appearances (Lillehammer 1994 for Canada, Sochi 2014 for Czech Republic). At Turin 2006, they were part of the first ever Canadian men’s curling team to win Olympic gold after their stunning victory at the Canadian Trials.

Just in their mid-20s at the time, it was the breakout moment of their careers. They have since won three national titles with Gallant and Walker, with whom they have played for almost a decade. Gallant and Walker will be making their Olympic debuts in February.

“As a team we’ve put in so much hard work on and off the ice, and to see it rewarded with another trip to the Olympics is very gratifying and humbling. Wearing that maple leaf at the Olympic Games is just such an amazing experience and we can’t wait to get to Beijing to do it again,” said Gushue.

It was at home in St. John’s, Newfoundland that Team Gushue won their first Brier in 2017, which they followed up with a gold medal at that year’s world championship. The next year they won silver at the worlds. They did not get a chance to compete at the world championships after winning the Brier in 2020 when the competition was cancelled because of the COVID-19 pandemic.

On December 20 it was announced that Marc Kennedy would serve as Team Gushue’s fifth/alternate at Beijing 2022. Currently the third for Team Jacobs, Kennedy brings the experience of competing at two Olympic Games and winning gold at Vancouver 2010.

Canada is the all-time leader in Olympic curling medals won with 11. Ten of those came in the men’s and women’s tournaments as Canada did not miss the podium in either event from Nagano 1998 through Sochi 2014.

The legendary Sandra Schmirler skipped her team to the first ever women’s curling gold medal awarded at Nagano 1998. Jones and her team added another gold at Sochi 2014. Canada won three straight gold medals in the men’s tournament starting with Gushue and Nichols at Turin 2006, then Team Kevin Martin Vancouver 2010 and Team Brad Jacobs at Sochi 2014.

Still to come is the selection of Canada’s mixed doubles team for Beijing 2022. Those trials will take place December 28 to January 2 in Portage la Prairie, Manitoba.

At Beijing 2022, mixed doubles will kick off the curling competition on February 2, two days before the Opening Ceremony. After those medals are awarded on February 8, the men’s and women’s tournaments begin on February 9 with the round robins. Medal matches will take place February 18-20. Canada’s specific draw schedule for the round robins will be announced at a later date.