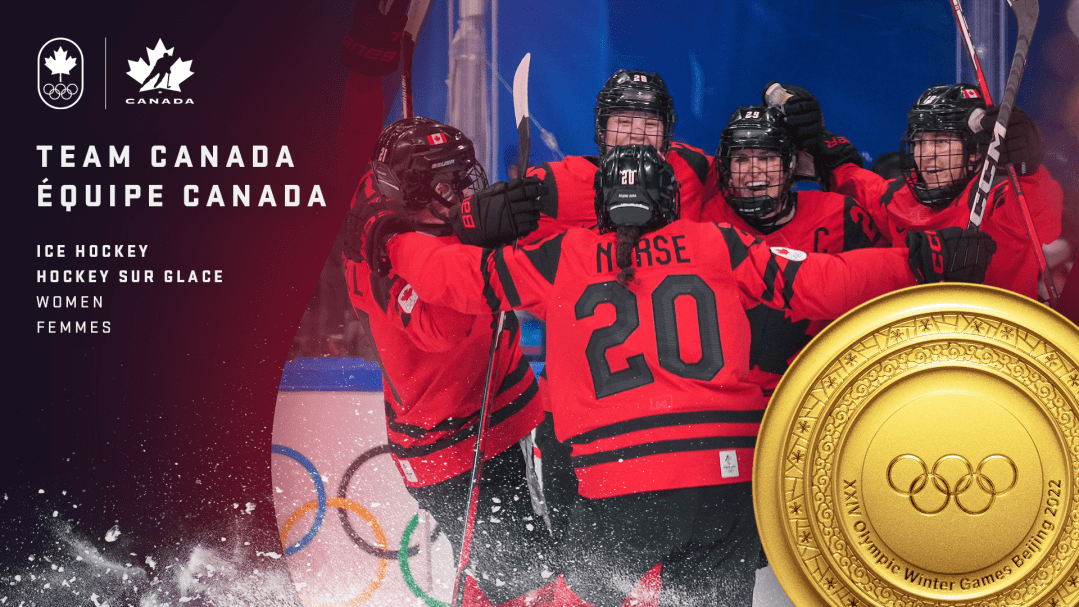 Captain Marie-Philip Poulin scored twice to lead Canada to a 3-2 win over the United States in the gold medal game at Wukesong Sports Centre. Sarah Nurse added a goal and an assist while Ann-Renée Desbiens, stopping 38 of 40 shots, earned the win in net.

It’s the fifth time Canada has won gold in women’s hockey at an Olympic Games but the first since Sochi 2014. Canada fell 3-2 to the United States in the championship contest at PyeongChang 2018, ending a streak of four straight gold medals. Since women’s hockey was added to the Olympic program at Nagano 1998, Canada and the United States have met in six of the seven gold medal matches.

It looked as though Natalie Spooner had opened the scoring for Canada at 7:15 of the opening frame, putting in the rebound of a Mélodie Daoust shot that was blocked in front. But after a review, the goal was called back due to an offside. Not long after at 7:50, Canada officially opened the scoring when Nurse redirected a Claire Thompson point shot past American netminder Alex Cavallini.

Poulin made it 2-0 at 15:02. After stripping an American defender of the puck, the Canadian captain skated into the middle of the offensive zone and threw a shot on net that fooled Cavallini. With the goal, Poulin became the first hockey player – female or male – to score in four Olympic gold medal games.

Poulin struck again at 9:08 of the second period. Canada entered the zone on an odd-man rush with Brianne Jenner firing a hard shot on Cavallini. A rebound came loose, allowing Poulin to bank the puck off the leg of the American netminder and in, making it 3-0 Canada. Nurse picked up the other assist on the goal, giving her an Olympic record 18 points.

The United States got on the board at 16:39. While shorthanded, Hilary Knight carried the puck into the zone and deposited her own rebound, making it a 3-1 game.

Alex Carpenter had a great chance to get the Americans back within one early in the third but hit the post. With 9:21 remaining, Jocelyne Larocque took a hooking penalty but the Canadians produced a key penalty kill.

Canada entered the game with a 6-0 record in Beijing while the Americans were 5-1. The Canadians went 4-0 in the preliminary round, which included a 4-2 victory over the U.S. where Desbiens made 51 saves. Canada then went on to defeat Sweden 11-0 in the quarterfinals and Switzerland 10-3 in the semifinals to advance to the gold medal game.

READ : ‘Captain Clutch’ leads Team Canada back to the top of the Olympic podium