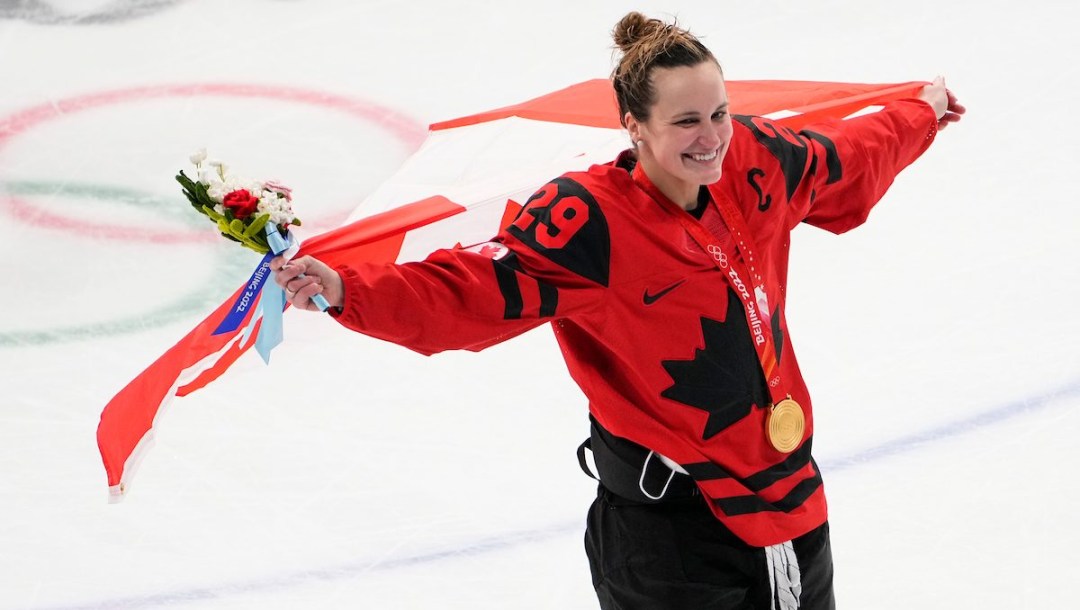 Marie-Philip Poulin did it again.

The Canadian captain – or Captain Clutch – scored a pair of goals to lead Canada to a 3-2 win over the rival United States in the women’s hockey gold medal game Thursday. The 30-year-old became the first player – female or male – to score in four Olympic gold medal games and now has a remarkable seven goals in those matches.

How does she do it?

“Those girls out there,” said Poulin, pointing to her teammates, in a post-game interview with CBC. “We celebrate each other’s success and we want each other to succeed. It just showed tonight. From line after line, people were in, people were dialed in and we did it. We did it and I’m very happy.”

It’s the third time Poulin has scored a pair of goals in an Olympic gold medal game. Her lone one-goal performance came in the championship game at PyeongChang 2018, a painful 3-2 shootout loss to the Americans.

“I just got shivers,” said Poulin about winning gold after the heartbreak of four years ago. “It feels very good — 2018 was very hard. You take some time to reflect on what you need to do better as a group and personally, I did. It really pays off. When you surround yourself with good people, good things happen. We are resilient and we were going to put (2018) in the past and win that gold today.”

Canada has participated in every women’s hockey gold medal game since it was added to the Olympic program at Nagano 1998, winning five of the seven matches. Canada and the United States have met six times for gold and the final game in Beijing once again showed the razor thin margin that separates the two programs.

The Canadians leave Beijing with a perfect 7-0 record, outscoring opponents 57-10. But their two wins over the United States were both close — 4-2 in the preliminary round and 3-2 in the championship game. The Americans outshot Canada in both meetings.

“We took it day by day. Game by game. We didn’t try to get too far ahead of ourselves,” said veteran Rebecca Johnston, who was competing in her fourth Olympic Games.

Another key to the team’s success, said Johnston: have fun.

“This is the most fun our team has ever had. We are just trying to enjoy every moment and it has paid off.”

Canada led 2-0 after the first period of the gold medal game thanks to goals from Poulin and Sarah Nurse. Poulin netted her second of the game at 9:08 of the middle frame, putting in the rebound of a Brianne Jenner shot to make it 3-0. Hilary Knight scored late in the second to give the Americans a bit of momentum heading into the third period.

In that final frame, Poulin took a tripping penalty with 1:25 remaining but goaltender Ann-Renée Desbiens and the Canadian penalty kill put in a strong effort until Amanda Kessel scored with only 13.5 seconds remaining. After Canada won the ensuing centre ice faceoff, the Americans didn’t have enough time left on the clock to generate another scoring opportunity.

“Our PK (penalty kill) did an incredible job,” said forward Sarah Fillier. “They were putting their bodies on the line for us, for Canada.”

The 21-year-old Fillier finished her first Games with eight goals and three assists, placing her second in tournament goal scoring and sixth in points. Fillier was among a number of first-time Olympians on the Canadian roster who had impressive performances in Beijing — most notably 29-year-old Jamie Lee Rattray and 24-year-old Claire Thompson.

“I don’t think I can find the words. I’m still shaking.”

With a goal and an assist in the gold medal game, Nurse finished the tournament with 18 points, breaking Hayley Wickenheiser‘s Olympic record of 17 set at Turin 2006. Jenner, meanwhile, finished with a Beijing-best nine goals, matching the single Games record.

Jenner, who collected 14 points, was named the tournament’s most valuable player and joins Nurse, Poulin and Thompson on the all-star team.

In net, Desbiens posted a 5-0 record to go along with a 1.80 goals against average and a .940 save percentage. As has become international hockey tradition during COVID times, teammates hang medals around the necks of each other. Poulin delivered Desbiens’ medal.

“It felt very good,” said Poulin. “Ann has been ready to go since day one here and she showed up in those big moments.

“She is a goalie that is going to do the job when it’s time. She has made big saves. She kept us in the game and being able to give the medal to her felt very special.”

Now a three-time Olympic gold medallist, Poulin has already cemented herself as one of, if not the best women’s hockey player of all-time — and she could still add to her legacy. When asked if she’ll look to compete in her fifth Olympic Games at Milano Cortina 2026, her answer was short and simple.