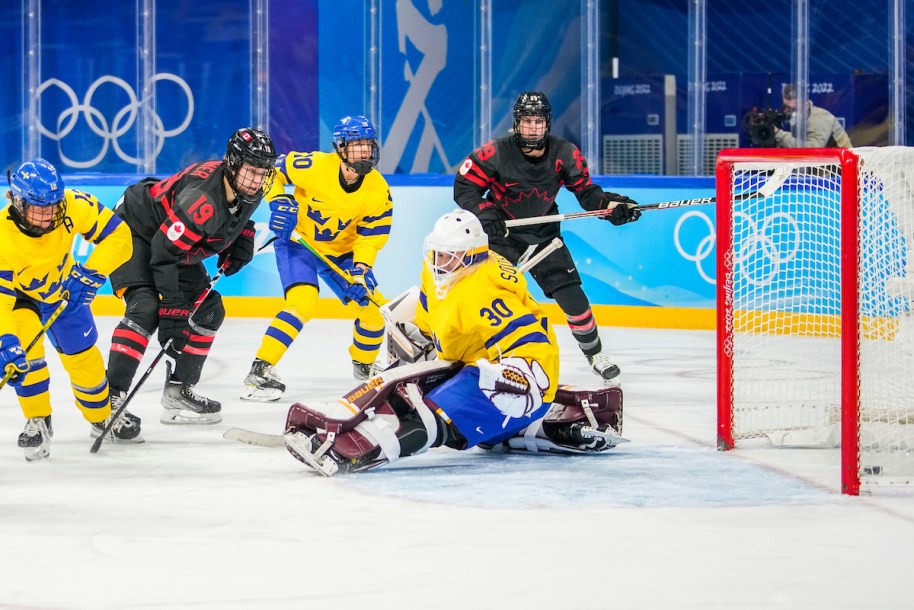 Team Canada has advanced to the semifinals of the women’s hockey tournament at Beijing 2022.

Brianne Jenner and Sarah Fillier each recorded hat tricks to lead the Canadians to a 11-0 victory over Sweden in Friday’s quarterfinal contest. The victory secures Canada a spot in the tournament’s final four as the team looks to improve upon the silver medal they won at PyeongChang 2018.

Canada has now outscored opponents 44-5 in five games in Beijing. They’ve reached double digits in three of those games.

“I don’t think we set out every game to hit double digit goals,” said Fillier. “We’re playing within our system and our system is to produce offence and we’re just burying the puck at a pretty efficient rate.”

Just 3:05 into the game, Jenner accepted a pass while parked down low and made a quick move to her forehand, beating Swedish netminder Emma Soderberg to make it 1-0.

After successfully killing off two penalties, Canada was awarded a power play at 16:43. Rebecca Johnston found Fillier in front to give Canada a 2-0 lead at 17:05. Just 36 seconds later, Fillier scored again from the side of the crease to increase Canada’s lead to 3-0.

Canada went to another power play at 19:23. Twelve seconds in, Rattray fired a shot from the rim of the circle to give Canada a commanding 4-0 lead after 20 minutes. Emerance Maschmeyer, making her second start of the Games, faced just three shots in the period and 11 in the entire game to earn the shutout win.

Canada’s power play struck again just 3:16 into the second period. A Nurse shot was stopped by Soderberg but Spooner was in perfect position to deposit the rebound.

At 5:15, Ambrose took a cross ice feed from Poulin and beat Soderberg high and over the glove. Then at 6:56 it was Ambrose setting up a goal, finding Turnbull from behind the net to make it 7-0 Canada.

“We are at our best when we keep it light and have a lot of fun,” said Turnbull. “Our offence has been really good so far and it’s something that gives us a lot of energy. It’s something that we’re looking to continue in our next games.

“But I don’t think it matters how many goals we’re scoring as long as we’re coming up with the wins. The goal is to win the gold but being able to score so many goals and score in so many different ways gives us confidence. It shows that everything we’ve practised throughout the season is paying off.”

Jenner’s second of the game made it 8-0 at 8:13. Poulin fired a pass in front and Jenner perfectly redirected the puck past Soderberg.

Canada’s power play continued to click at 9:09. After a Canadian shot was blocked in front, the puck came to Clark in the slot who netted her first of the Games, making it 9-0.

Jenner completed her hat trick at 10:55 of the third. Micah Zandee-Hart sent a pass through the crease that found the veteran forward, giving the Canadians 10-0 lead. Just over a minute later at 12:06, Fillier followed up Jenner’s hat trick goal by scoring her own to make it 11-0.

Canada will have to wait until all quarterfinal games are completed to find out who their semifinal opponent will be.