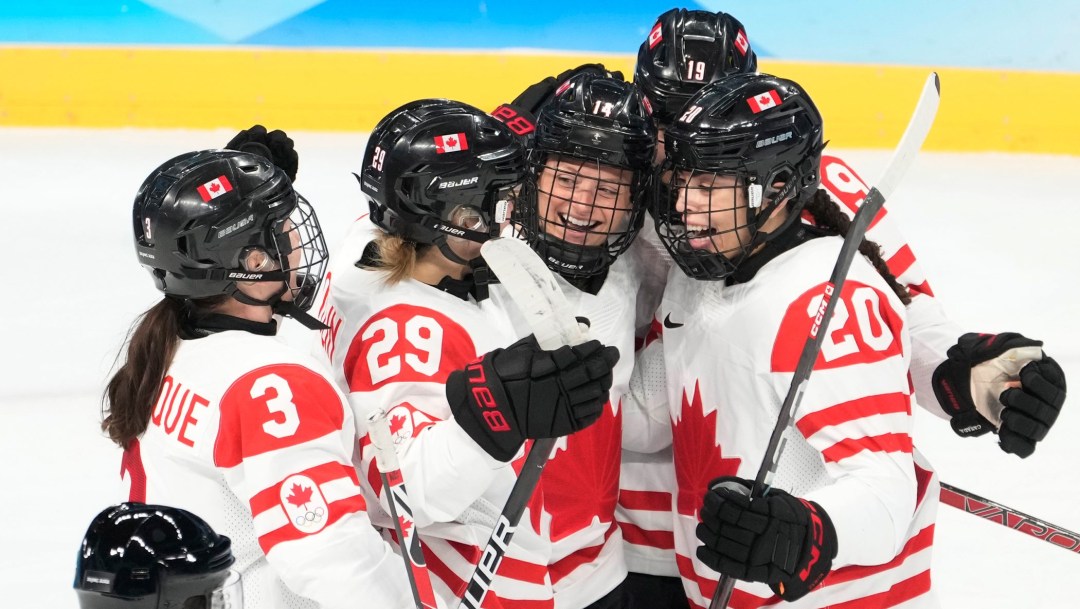 For a seventh straight Olympic Winter Games, Team Canada has earned a spot in the women’s hockey gold medal game.

Canada advanced to the championship contest with a 10-3 semifinal victory over Switzerland on Monday at Wukesong Sports Centre, improving to a perfect 6-0 at Beijing 2022.

The Canadians will face the United States in the gold medal game after the Americans defeated Finland 4-1 in the other semifinal. Canada and the United States have met in five of the six gold medal matches since women’s hockey was added to the Olympic program at Nagano 1998.

The gold medal game is scheduled for Wednesday at 11:10 p.m. ET.

“You just think of all the hours that we put in these past couple years training with three, four people on the ice training, and the matches, it’s not easy to get to this point,” Jenner said about reaching the gold medal game. “And to score the way that we’ve been scoring, that wasn’t just showing up at this tournament. It’s been building and building and building for years.”

“I think a lot of the credit is for our coach, Troy (Ryan),” Jenner said of the team’s scoring abilities. “I think he’s given us some great systems that allow us to be creative. He always jokes that, in order to get the creativity, you got to have some structure to work off of. He’s given us that structure and that green light.”

Canada scored five goals in under four minutes in the first period. Thompson, who entered the game having already set the record for points by a defensemen in a single Olympic Games, registered her 10th point in Beijing by ripping a wrist shot off the post and past Swiss netminder Andrea Brändli at 7:16.

Rattray made it 2-0 at 8:28. An Ambrose shot was blocked in front but Rattray was able to collect the rebound and deposit the puck over a fallen Brändli. Then at 9:04, Thompson picked up her second point of the game by setting up Turnbull to extend Canada’s lead.

Brändli’s day came to an end at 9:21 after Fast redirected a Nurse pass to make it 4-0 Canada. Saskia Maurer took over Swiss goaltending duties.

Ambrose welcomed Maurer to the contest by scoring on a point shot through some traffic at 10:40.

Switzerland got on the board at 18:37. With Micah Zandee-Hart in the box for high sticking, Lara Stalder fired a shot from the circle that beat Desbiens top corner, making it a 5-1 game after 20 minutes.

Alina Muller kept the Switzerland momentum going at 4:59 of the second period. Stalder made a nice pass ahead to Muller who beat Desbiens with a low shot to make it a 5-2 contest.

Canada responded to Muller’s goal with two of their own. At 7:52, Poulin beat Maurer with a quick shot and then at 8:03, Clark redirected a pass from Johnston and in, giving Canada a 7-2 lead.

Switzerland’s power play struck again at 9:44. Canada turned the puck over and allowed Stalder to spin and shoot in front of the net to make it 7-3. The goal was Stalder’s third against Canada in Beijing.

Three goals is the most Canada has given up in a single game in Beijing.

Poulin netted her second of the period 13:27, stripping a Swiss defenseman of the puck, cutting in front of the goal and roofing a backhand shot under the crossbar and in, giving Canada a commanding 8-3 lead after 40 minutes.

Canada made it 9-3 by scoring just 3:13 into the third period. Laura Stacey had the puck behind the net and found Maltais in front to extend the lead.

At 18:11, Jenner carried the puck into the zone and fired a slap shot from the top of the circle to make it a 10-3 final. The goal, Jenner’s ninth of the tournament, ties the record for most in a single Olympic Games.

The victory improves Canada’s record to 5-0 all-time against Switzerland at the Olympic Games. This was the second meeting between the two in Beijing with Canada posting a 12-1 win in the preliminary round.