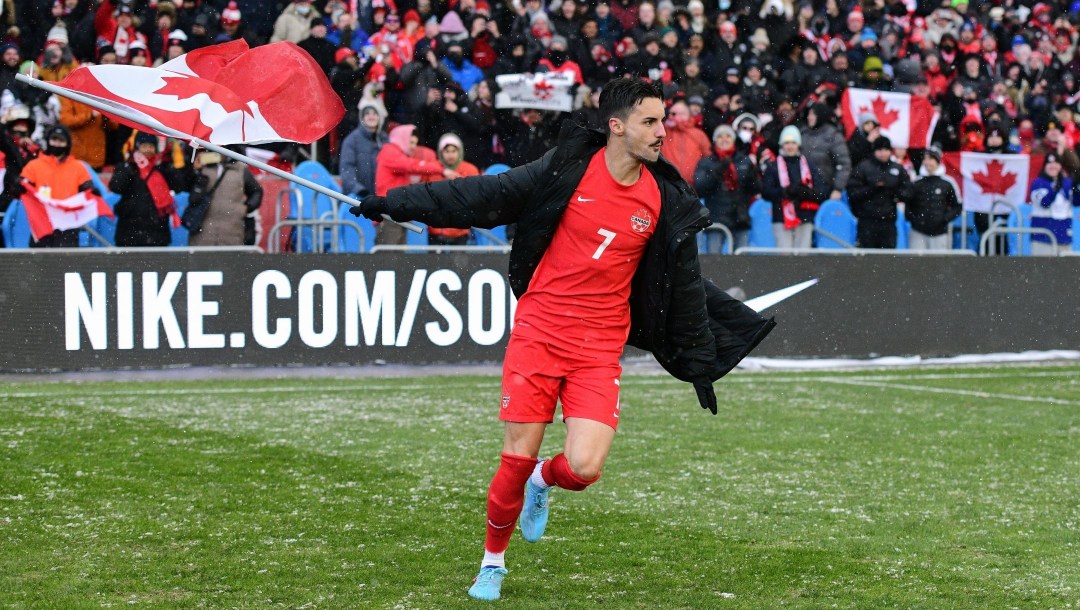 This past weekend saw several Team Canada athletes conclude a long winter season by standing on an international podium one more time.

And though the Canadian men’s soccer team may have captured the attention of the nation and the soccer world as a whole with their breakthrough moment on Sunday, they were far from the only success story.

Here is what you may have missed:

After dropping their first game of the Concacaf qualifying tournament 1-0 to Costa Rica on Thursday, Canada thrilled the loyal fans who braved winter weather in Toronto to watch them have a moment 36 years in the making.

Facing Jamaica, Canada jumped out to a two-goal lead before halftime with contributions from Cyle Larin in the 13th minute and Tajon Buchanan in the 43rd. Coming out for the second, they added two more goals from Junior Hoilett in the 83rd minute and Adrian Mariappa’s own goal in the 88th. With the 4-0 win, Team Canada punches their ticket to the 2022 FIFA World Cup in Qatar.

Skip Kerri Einarson and Team Canada went 9-3 in round robin play to earn the third playoff seed at the World Women’s Curling Championship in Prince George, B.C. After downing Denmark 9-8 in their qualification playoff game, Canada faced a tough South Korean team in the semifinals. They gave up three stolen points in the last two ends to end up with a heartbreaking 9-6 loss.

But the Canadians were determined not to leave the worlds empty-handed. In the bronze medal match against Sweden, they were taken to an extra end, but with the hammer Einarson made the last shot she needed to get onto the podium with an 8-7 win.

In their first world championship appearance together, Vanessa James and Eric Radford stood on the podium. The Canadians, who began their pairs partnership in the spring of 2021, won the bronze medal in Montpellier, France. With a total of 197.32 points, James and Radford posted the best result of their short career together to finish behind American duo Alexa Knierim and Brandon Frazier (221.09 points) and Japan’s Riku Miura and Ryuichi Kihara (199.55 points).

Canada’s other pair, Evelyn Walsh and Trennt Michaud, finished sixth for their best result in three appearances at the worlds. The combination of those results should qualify Canada three pairs for the 2023 World Championships.

In men’s singles, Roman Sadovsky bounced back from his tough Olympic debut by finishing ninth in the free skate and 12th overall, two spots ahead of Keegan Messing. Those results should maintain two men’s spots for Canada at next year’s worlds. In women’s singles, Madeline Schizas finished 12th overall.

Blouin ends her season in style

For the second time in as many events, Laurie Blouin stood on a World Cup podium after winning silver in slopestyle. On Sunday, Blouin (90.20) finished behind Austrian snowboarder Anna Gasser whose 95.40 points were enough to secure the gold. Blouin finished second in the World Cup slopestyle standings with teammate Jasmine Baird placing just behind her. .

Corey Conners had a great week at the World Golf Championship in Austin, Texas, finishing in third place. Conners posted a 3&1 victory in the third place match over former world number one Dustin Johnson. The 30-year-old golfer got off to a hot start with two birdies in his first three holes to take a comfortable three-shot lead. The Canadian then added a stroke to his lead on the sixth hole before Johnson responded with birdies on the seventh and 12th holes to close the gap to two.

Conners, however, left no chance of a late-round comeback with consistent play and his victory was confirmed on the 17th with another birdie. Earlier in the day, the Canadian golfer lost by two strokes in the semifinals to American Kevin Kisner, the tournament’s runner-up. Conners had won each of his first five matches prior to the day’s semifinal round.

Danica Wu was 14 years old when she made her debut with the Canadian program in 2007. A year later...