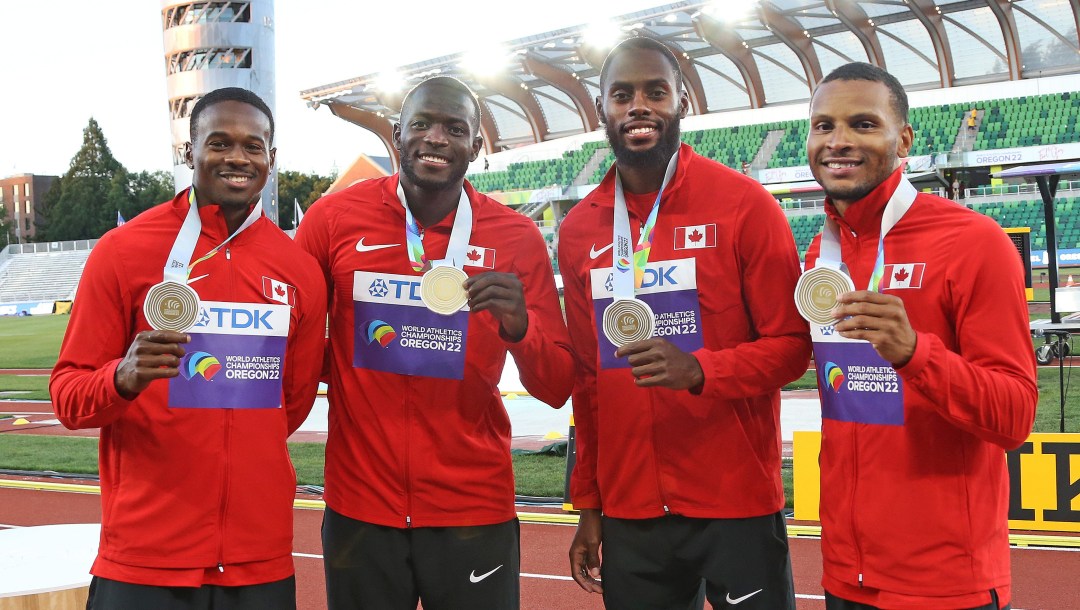 Team Canada is coming home from the World Athletics Championships in Eugene, Oregon with four medals after three more podiums this past weekend.

Teamwork was the difference maker for Canada’s golden quartet in the men’s 4x100m relay while two athletes enjoyed the big breakthrough of winning their first world championship medals. Meanwhile in France, Brooke Henderson and Hugo Houle were each making some major history of their own.

Here’s a quick look back at a truly triumphant week for Canadian athletes:

For the first time in 25 years, Canada is home to the world champions in the men’s 4x100m relay.

Aaron Brown, Jerome Blake, Brendon Rodney and Andre De Grasse used their training to execute near perfect exchanges and win the gold medal in a blazing fast 37.48 seconds. It is the quickest time in the world this season and a Canadian record. The United States had been leading until the final leg, but De Grasse got past American anchor Marvin Bracy and beat him to the line by 0.07 of a second.

Pierce LePage smashed his personal best score in the decathlon to win the silver medal. This after watching his teammate and Olympic champion Damian Warner have to withdraw after visibly pulling his hamstring during the 400m at the end of Day 1.

The 26-year-old LePage finished with 8701 points, 97 points higher than his previous best, to claim his first career world championship medal. LePage did that with personal best performances in the 400m, 110m hurdles, and discus. He held the lead heading into the last two events but was overtaken by world record holder Kevin Mayer of France.

Marco Arop became Canada’s first world championship medallist in the men’s 800m since 2007. The 23-year-old from Edmonton finished with a time of 1:44.28 to win the bronze medal.

Athletics: Other notable results from Oregon 🔥

In addition to the four medals Canadian athletes won in Eugene, there were 10 other top-eight finishes. Highlights from this past week include a fourth-place finish in the women’s 4x400m relay by Natassha McDonald, Aiyanna Stiverne, Zoe Sherar, and Kyra Constantine who ran a season best time of 3:25.18.

Mohammed Ahmed finished fifth in what was seen as the deepest 5000m field ever. In the last lap, he hoped to catch eventual champion Jakob Ingebrigtsen but just didn’t have enough juice left to keep pace and was passed for the podium.

Competing in a brand new event, Evan Dunfee finished sixth in the 35km race walk, an event 15km shorter than his beloved 50km race walk in which he won bronze at Tokyo 2020. The 50km event is no longer part of the Olympic or world championship program. His time of 2:52:02 was a North American area record and left him just over a minute back of the podium.

Django Lovett placed sixth in the high jump for his career-best at the worlds and Aaron Brown was seventh in the 200m. Liz Gleadle cracked the top 10 with a ninth place finish in the women’s javelin.

Brooke Henderson won her second career major on Sunday at the Evian Championship, taking the victory by one stroke. She is the first Canadian golfer — male or female — to win multiple major tournaments. She has waited six years since winning the 2016 Women’s PGA Championship at the age of 18. Now 24, Henderson adds her 12th LPGA Tour title to her resume.

Henderson was historically good to start the tournament, becoming the first player in LPGA history to begin a major with two rounds of 64 or lower.

Hugo Houle put his name into the history books by winning Stage 16 of the 2022 Tour de France on Tuesday.

READ: Houle becomes second Canadian to ever win a stage at the Tour de France

He became just the second Canadian to ever win a stage at the Tour de France. It was last done by Steve Bauer who won the first stage of the 1988 Tour de France. Houle finished 24th in the general classification.

At the World Fencing Championships in Cairo, Egypt, the Canadian women’s foil team of Eleanor Harvey, Jessica Guo, Kelleigh Ryan, and Sabrina Fang finished fifth. Their only loss of the tournament came against Japan in the quarterfinals. Individually, Harvey and Guo both advanced to the round of 16 and finished ninth and 11th, respectively. The men’s foil team of Blake Broszus, Bogdan Hamilton, Eli Schenkel and Max Van Haaster placed seventh overall.