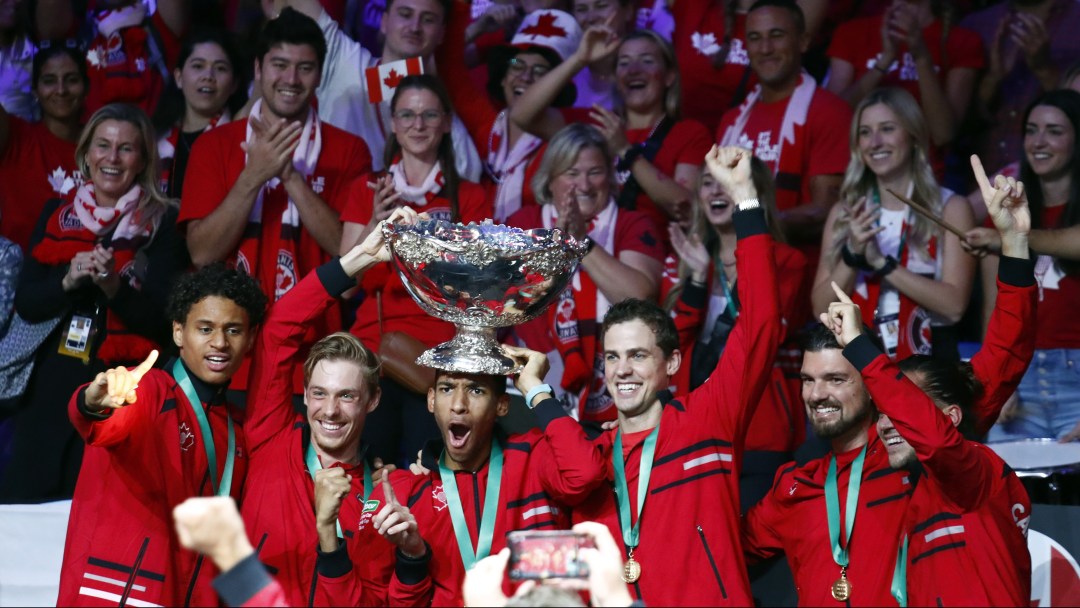 There’s a first time for everything!

After more than a century of trying, Canada is finally bringing the Davis Cup home. There were also first time World Cup medallists in bobsleigh and a big win for ice dancers Piper Gilles and Paul Poirier.

Here’s a look at the details and a few other results you may have missed:

Playing in their second Davis Cup final in four years, Canada was crowned the best men’s team in tennis on Sunday in Malaga, Spain. Denis Shapovalov and Félix Auger-Aliassime locked up the win by defeating Australia with two straight sets singles victories. After Shapovalov took down Thanasi Kokkinakis 6-2, 6-4, Auger-Aliassime got the better of Alex de Minaur, 6-3, 6-4.

Canada had advanced to the final after beating Italy 2-1 in Saturday’s semifinal. That tie came down to the doubles match in which Auger-Aliassime teamed with Vasek Pospisil, the veteran of the group, to get the needed victory. On Thursday, Pospisil and Shapovalov had won the doubles match to get past Germany in the quarterfinals.

Canada has been playing in what’s dubbed the World Cup of tennis since 1913. Alexis Galarneau and Gabriel Diallo were also members of the team captained by Frank Dancevic in Malaga.

In her first World Cup as a pilot, Bianca Ribi drove to monobob gold at the IBSF World Cup in Whistler, B.C. Teammate Cynthia Appiah made it a 1-2 Canada finish as she won the silver medal.

READ: Ribi and Appiah speed onto the monobob podium in Whistler

On Sunday, Taylor Austin and his crew of Shaquille Murray-Lawrence, Cyrus Gray and Davidson de Souza gave the home crowd a nice surprise by winning bronze in the four-man event. It was the first World Cup medal for all of them. It was Austin’s second ever World Cup competition after debuting in St. Moritz last January.

“The first run was a pretty good run. It is good to see we can have two consistent runs and reach the podium,” said Austin. “The guys were focused today. They were ready to lay it down on the line. They trusted themselves pushing and loading and put their trust in me to get us down as fast as possible and it worked out.”

The rookie crew were in second place after the first run down the 16-corner, 1694-metre ice track. They were leapfrogged by a British sled piloted by Brad Hall in the second run, but held onto a podium position. Two-time reigning Olympic champion Francesco Friedrich piloted his German sled to the gold medal, finishing 0.81 of a second ahead of Austin and company.

Austin is just the fourth Canadian pilot to win a four-man World Cup medal at the Whistler Sliding Centre.

Austin and Murray-Lawrence placed sixth in the two-man race while Bibi (with Niamh Haughey) and Appiah (with Leah Walkeden) drove their sleds to fifth and sixth place finishes, respectively, in the two-woman event.

In skeleton, Blake Enzie finished a career-best sixth in the men’s event in just his fourth World Cup start ever. Mirela Rahneva and Jane Channell placed seventh and eighth, respectively, in women’s skeleton.

Once again, Piper Gilles and Paul Poirier landed on top of the podium after crushing the ice dance competition at the ISU Grand Prix of Figure Skating in Espoo, Finland on Saturday. The duo took the lead after scoring a personal best 87.80 points in the rhythm dance. They also earned a personal best 131.69 points in the free dance for an overall total of 219.49, the highest score in the world this season.

This victory, combined with their win at Skate Canada International in late October, has qualified Gilles and Poirier for the Grand Prix Final which will take place from December 8-11 in Turin, Italy. Elsewhere in Espoo, Madeline Schizas placed fifth in the women’s event while Keegan Messing was eighth in the men’s.

Amidst snowy skies at Lake Louise, Olympic bronze medallist James Crawford blasted down the course on his way to 10th place in the super-G at the FIS Alpine Ski World Cup. Brodie Seger wasn’t far behind in 13th place. It was the first World Cup stop of the season for the men’s speed team. They’ll now head to Beaver Creek, Colorado for one super-G and two downhill races next weekend.

Track Cycling: Trio of cyclists 🚴‍♀️ race to the podium

Three cyclists claimed spots on the podium during the third stage of the UCI Track Champions League in France.

At the Vélodrome National de Saint-Quentin-en-Yvelines, which will host track cycling events during the upcoming Paris 2024 Olympic Games, Mathias Guillemette finished second in the men’s elimination race. Guillemette had led the men’s endurance standings after two rounds of Champions League competition, but the 20-year-old has now dropped to second.

Olympic sprint champion Kelsey Mitchell finished with bronze in the women’s keirin. She sits in third position in the women’s overall sprint standings. In the women’s elimination race, Maggie Coles-Lyster also secured bronze. She is now one point out of from third place in the overall endurance standings. Round four will begin on December 2 at Lee Valley VeloPark in London, England.