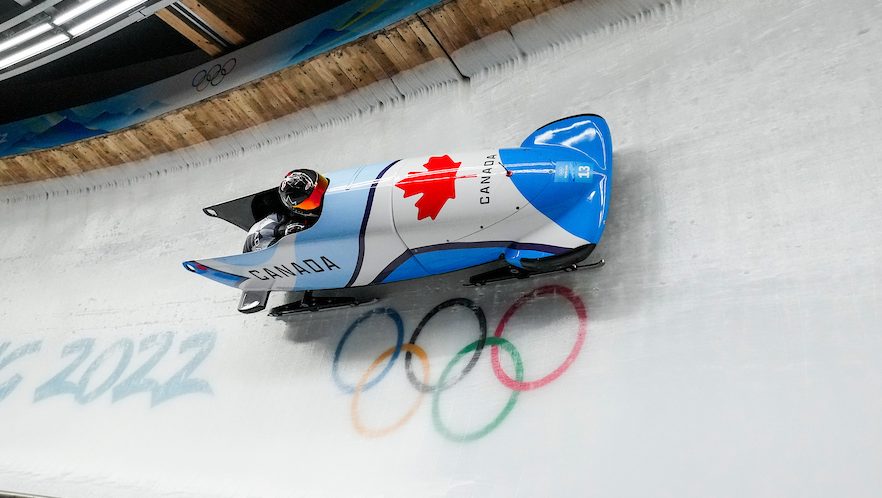 It’s time to cheer on Team Canada’s stars of the sliding sports — you know, the ones who speed down ice tracks going faster than 100 kilometres an hour.

The 2022-23 season will soon be underway for our bobsledders, skeleton racers, and lugers. Though there are some returnees in all three sports from the Beijing 2022 Olympic Team who are ready to show their stuff against the world, there will also be many bright new faces to keep a close eye on.

To help set you up with what to watch in the coming months, here’s a sport-by-sport breakdown of bobsleigh, skeleton, and luge – including when and where you can catch your favourite Canadian athletes in action at home.

The biggest off-season news came from three members of Canada’s bronze medal-winning four-man crew at Beijing 2022. After becoming the first Canadian pilot to win Olympic medals in two-man and four-man, Justin Kripps announced his retirement alongside Ryan Sommer and Cam Stones. They had competed together as a crew (with Ben Coakwell) for four seasons, culminating in their storybook ending at the Olympics.

Kripps didn’t take long to decide what was next for him as he joined the National Bobsleigh Team as a technical coach. He’ll be able to share his years of wisdom and driving expertise with a new generation of Canadian athletes.

After two Olympic appearances, Melissa Lotholz has decided to take a break from bobsleigh and turn her focus towards finishing the university degree that she put on hold to pursue her sporting dreams.

The World Cup season will open on Canada’s west coast at the Whistler Sliding Centre where Cynthia Appiah and Bianca Ribi will be the pilots of the Canadian women’s sleds in both the monobob and two-woman events. They will be supported by three brakewomen: Niamh Haughey, Leah Walkeden, and Alexandra Klein.

At a lower-tier North American Cup event in Whistler in mid-November, Ribi and Haughey won both two-woman races while Appiah and Walkeden were just behind them in second place. Appiah was the top Canadian in both monobob races.

The men’s team will be led by pilot Taylor Austin. He’ll have five brakemen alongside him to start the season: Cyrus Gray, Shaquille Murray-Lawrence, David Caixeiro, Davidson de Souza, and Chris Ashley. Austin was pushed by different combinations of these men in two-man and four-man at the first North American Cup event.

Veteran pilot Christopher Spring says he isn’t done competing yet, but he is recovering from off-season knee surgery that he had postponed for two years because he didn’t want the lengthy rehab process to disrupt his plans for a fourth Olympic appearance last February.

All three of Canada’s Beijing 2022 Olympians are back. Mirela Rahneva will be racing for the first time since her fifth-place finish in Beijing. She is no stranger to World Cup success, having stood on 11 podiums in her career. That haul includes two bronze medals from last season.

Jane Channell has also shown that she is capable of winning World Cup medals. She last stood on a podium in January 2021 but had five top-10 finishes last season.

On the men’s side, Blake Enzie will be joined by Evan Neufeldt. Enzie was the youngest competitor man in the men’s skeleton field at Beijing 2022 where he finished 20th. Still just 21, Enzie he is looking to build on that experience after having just three prior World Cup races to his credit.

Neufeldt competed in his first World Cup races back in 2015. But his three World Cup appearances last season were his first in more than four years. An alternate for PyeongChang 2018, he took a break from skeleton after suffering persistent headaches. In late 2019, he was diagnosed with epilepsy. While in hospital after a seizure in May 2020, he had another seizure that led to him falling out of bed and breaking part of the C7 vertebrae in his neck, which caused some nerve issues in his right arm. It is incredibly remarkable that he has been able to return to racing.

For the first time in 12 years, Tristan Walker and Justin Snith will not be seen on the FIL World Cup circuit. The four-time Olympians in doubles, who won silver as part of the team relay at PyeongChang 2018, have decided to end their competitive careers. Walker spent the summer working towards his helicopter pilot license while Snith was also starting to explore what “the other side” is like.

Makena Hodgson, who finished 17th in women’s singles at Beijing 2022, announced in August that she had decided to retire. After competing in his second Olympic Games, Reid Watts is taking some time away from the ice track to pursue his pilot’s license.

Canada’s National Team is a young one. Twenty-year-old Trinity Ellis is the lone holdover from the 2022 Olympic team who will be competing full time on the World Cup circuit. She finished 14th in women’s singles in Beijing.

The heirs apparent to Walker and Snith in men’s doubles are Devin Wardrope and Cole Zajanski. At 20 and 21, respectively, they are embarking on their second World Cup season.

After making her Olympic debut in singles in Beijing, Natalie Corless is reuniting with Caitlin Nash for women’s doubles during the North American stops of the World Cup circuit in Whistler and Park City. Still teenagers, they had made history in December 2019 when they became the first women to compete against men in a World Cup doubles race.

Brooke Apshkrum, who won gold at the 2016 Youth Olympic Games and then competed at PyeongChang 2018 when she was just 18, has decided to come back after a couple of seasons away. She’s making the switch over to doubles, teaming up with 19-year-old Kailey Allan. A women’s doubles luge event will be included on the Olympic program for the first time at Milano Cortina 2026.