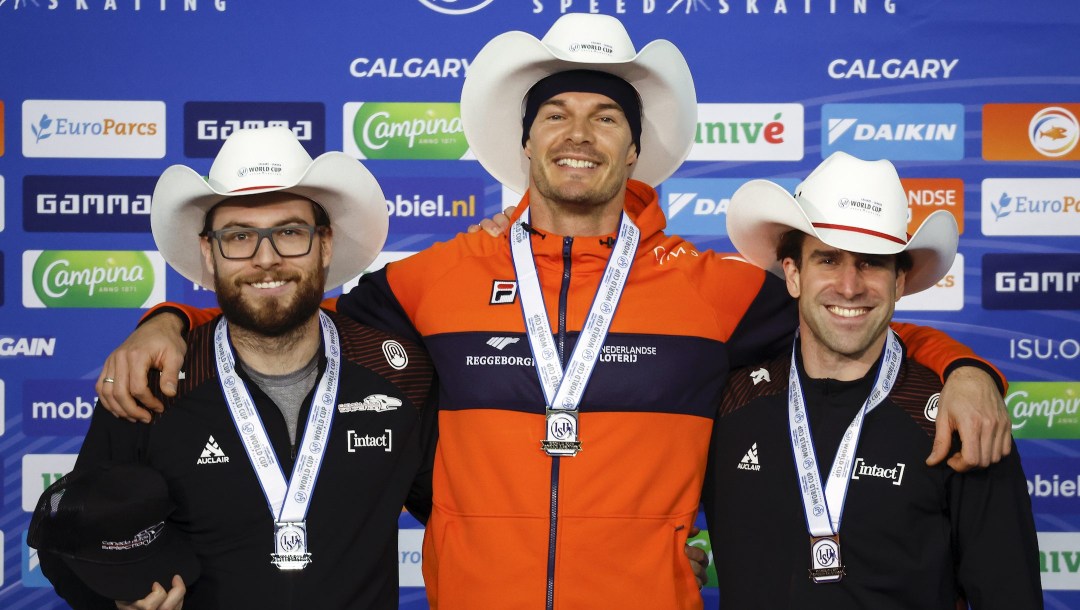 Double podium for Dubreuil and Gélinas-Beaulieu at Calgary World Cup

After skating to two gold and one silver on Friday and Saturday, Team Canada added two more medals on Sunday to conclude the third stop of the ISU World Cup Speed Skating circuit in Calgary.

Laurent Dubreuil returned to the Calgary Olympic Oval to secure silver in the men’s 1000m final with a time of 1 minute and 7.307 seconds.

Teammate Antoine Gélinas-Beaulieu clocked 1:07.325 to join Dubreuil on the podium in third position. Hein Otterspeer of the Netherlands (1:07.284) finished ahead of the Canadians with gold.

This is the first of two straight speed skating World Cups in Calgary. Canadians will be back in action December 16-18, 2022 for the fourth World Cup of the season.

Laurent Dubreuil and the Canadian women’s team pursuit won gold on the second day of the ISU Speed Skating World Cup at the Calgary Olympic Oval.

In the 500m final, Dubreuil was the first to cross the line in 34.017 seconds. He finished 0.17 seconds ahead of Japan’s Tatsuya Shinhama. Korean Jun-Ho Kim rounded out the podium with bronze and a time of 34.198.

READ: Howe and Dubreuil skate to gold in the Netherlands

This is Dubreuil’s second straight 500m victory on the World Cup circuit. The reigning 500m World Cup champion got his first gold of the 2022-23 season in November at the ISU World Cup in Heerenveen, Netherlands. Dubreuil also received a 500m silver earlier this season from the Stavanger World Cup.

The second gold medal of the day for Canada went to the team of Ivanie Blondin, Valérie Maltais and Isabelle Weidemann. The Olympic team pursuit champions crossed the line in 2:54.492.

In other results, Graeme Fish finished 10th in the men’s 5000m final. In the women’s 1500m final, Blondin finished in sixth position with a time of 1:53.860. Béatrice Lamarche finished 14th.

In front of a home crowd in Calgary on Friday, the team of Connor Howe, Antoine Gélinas-Beaulieu and Hayden Mayeur raced to silver in the men’s team pursuit on the opening day of the ISU Speed Skating World Cup.

The Canadian men crossed the line with a time of 3:36.485 at the Olympic Oval. They finished the 8-lap race just four one-hundredths of a second off the Canadian national record of 3:36.44, established by Ted-Jan Bloemen, Denny Morrison and Ben Donnelly in 2017. Friday’s result was even more impressive considering it was the first time the trio skated the team pursuit together.

“It gives us lots of encouragement,” Howe said following the race. “This year we’re trying out new things a bit, a new team with middle-distance guys to get to speed easier. If you can’t start fast enough, you can’t make up the time.”

“It seems to be working. If we think that’s good we’ll work on that towards the next Olympics and be better contenders.”