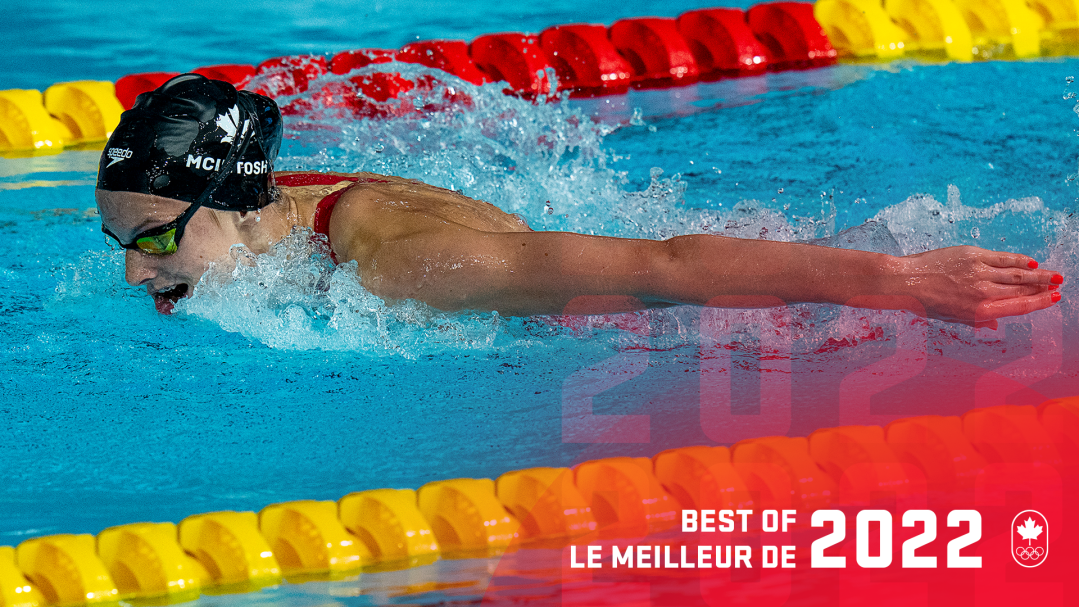 Since Rio 2016, the Canadian swimming team has been on a tear, led by Canada’s most decorated Olympian — Penny Oleksiak — through Tokyo 2020.

In a string of historic performances, Canadian swimmers won 11 medals at the FINA World Championships in Budapest in 2022, the most in team history. And while the veterans did what was expected of them, there were also a couple of new(er) faces who made everyone around the world take notice.

The emergence of Summer McIntosh

It was the summer of Summer – Summer McIntosh, that is.

The youngest Team Canada athlete at Tokyo 2020 at just 14 years old, the teen made waves when she took fourth place in the 400m freestyle.

Her successes in 2021 were just a preview of what she would accomplish in 2022, when she reached the top of her sport and showcased her versatility with a string of wins in different events.

In June, McIntosh became the first Canadian swimmer to win two gold medals at the same edition of the FINA World Championships. She was crowned world champion in the 200m butterfly and the 400m individual medley after having kicked off the competition by winning silver in the 400m freestyle.

“It’s one of my biggest dreams in the swimming world to become a world champion and to especially do it in the 200 fly. It’s something that I’ve always wanted to do, this is one of my favourite events.”

McIntosh also won bronze in the women’s 4x200m freestyle relay. In addition to these medals, the young swimmer also took the opportunity in her first world championships to break three junior world records, doing so in the two events in which she won gold and in the women’s 200m freestyle as the first swimmer in the relay.

The 15-year-old turned heads a month later at the Commonwealth Games in Birmingham, England. She was the most decorated Canadian athlete of the Games with a total of six medals, despite not even competing in the 200m butterfly. She took home gold in the 200m and 400m women’s individual medley, silver in the women’s 400m freestyle, the 4x200m freestyle relay and the 4x100m medley relay, as well as bronze in the 4x100m freestyle relay. She also took advantage of the occasion to beat her own junior world records in the two medley events.

One thing’s for sure, the future is bright for Summer!

Joshua Liendo: a young sprinter on the rise

While McIntosh’s performance is among the more incredible achievements in Canadian swimming in recent years, this year marked the return of Canadian men to the podium.

After having been a member of the 4x100m men’s freestyle relay team that finished fourth at Tokyo 2020, Joshua Liendo made a name for himself on the international circuit with three podium finishes in Budapest.

The young swimmer took home bronze in the 100m butterfly and 100m freestyle, in addition to a silver medal in the mixed 4x100m freestyle relay. It had been almost five decades since a Canadian man last won a world medal in the 100m butterfly. With a fifth-place finish in the 50m freestyle (just 0.04 short of a medal), a bright future is on the horizon for the short distance specialist who turned 20 years old this past August.

As the first Black Canadian swimmer to win an individual medal in a major international meet, representation and inclusion are key motivators for Liendo.

“[The fact that I’m the first] obviously shows that there’s not a lot of diversity in our sport,” he said in an interview with Swimming Canada, adding “It’s a good feeling to set an example.”

He later told CBC Sports “[Representation] is so important and it’s exciting to see. You love to see it in this sport that there’s more people like me.”

Moving forward, the swimmer has his sights locked on even more international podiums and hopes to inspire other young visible minority swimmers to find their place in the sport.

While Oleksiak’s nine medals at the FINA Worlds put her at the top of the all-time Canadian rankings, one of her teammates is not far behind. Kylie Masse, a regular on the podium in the backstroke events, added three more medals to her collection at the 2022 World Championships (gold in 50m backstroke, silver in 100m backstroke, bronze in women’s 4x100m medley relay), bringing her career total up to eight.

One thing is certain, Canadian swimmers are ones to watch in the years to come!