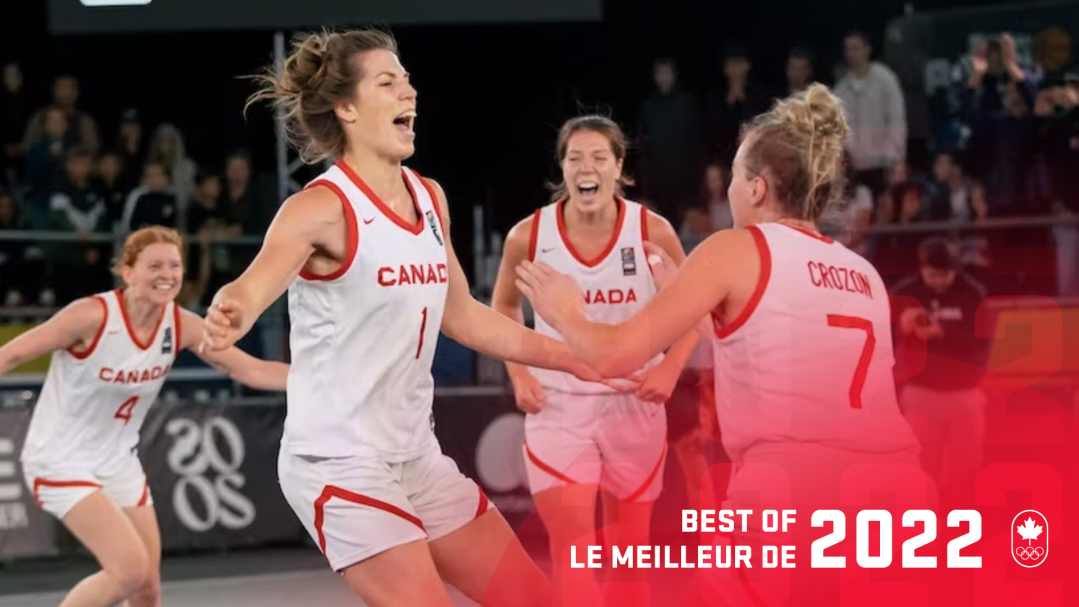 Oh what a difference a year can make.

In 2022, two Canadian women’s basketball teams – the 3×3 squad and the full court squad – rose like a phoenix from the ashes of Olympic disappointment to land among the best in the world.

It was a tough pill to swallow for twin sisters Michelle and Katherine Plouffe and their teammate Paige Crozon when because of some hard-to-comprehend criteria they didn’t even get the chance to play in a qualification tournament for Tokyo 2020.

The Plouffes had played together on the 5-on-5 national team for many years, including at Rio 2016. With Crozon, they formed a formidable 3×3 team in 2019 and had some very good results over the next couple of years.

But in 2022, they really made the world sit up and take notice.

It started at the FIBA 3×3 World Cup in late June. Though the tournament had been around for a decade, this was the first time a Canadian women’s team had been entered. With Kacie Bosch as their fourth player, Canada was seeded 13th among the 20 squads.

After a 3-1 record in the group stage, they stunned some when they handed top-seed Germany a lop-sided loss in the first round of the knockout stage. They proceeded to march past the United States and Lithuania to face second-seed France in the final. Though they couldn’t get that last victory, the silver medal they came home with was something to build upon.

And build they did.

A month later, the Plouffes, Crozon, and Bosch competed in their first stop of the FIBA 3×3 Women’s Series. They took the title in Edmonton where Michelle Plouffe was named MVP of the event after leading all scorers.

Two weeks later, they won their second straight event when they took the title in Bucharest, Romania. They needed just seven minutes of playing time to put away Italy in the final. This time Katherine Plouffe earned MVP honours for leading in rebounds and key assists.

The core four reunited in Montreal in early September where they won the last regular season tournament of the 3×3 Women’s Series. It was Crozon’s turn to be named MVP as Canada became the only team to win three stops during the 2022 series.

In mid-September, the Plouffes, Crozon and Bosch travelled to Constanta, Romania for the 3×3 Women’s Series Final. They wrapped up that title with five straight victories, capped off with a win over France to avenge their loss in the World Cup final.

Canada finished the season with a 25-3 record, good for a series-leading 89% winning percentage. Michelle Plouffe claimed her second MVP crown of the year. She dominated multiple key stat categories throughout the season, including points, highlights, key assists, triple-fives, blocks, and top player value.

In November, the Canadians won the FIBA 3×3 AmeriCup, their first tournament from which ranking points will count towards qualification for Paris 2024. Michelle Plouffe added another MVP trophy to her collection. She now leads the individual world ranking with Crozon and her sister holding onto second and third, respectively. As a team, Canada is also ranked first in the world and are clearly determined not to miss out on the Olympic Games again.

The general expectation for the Canadian Senior Women’s National Team at Tokyo 2020 was that they would win at least one playoff game. After all, they went into the Olympics ranked fourth in the world.

But a 1-2 record meant that they did not even advance from their preliminary group.

A little over a year later, many of those same players were back on the court and delivered Canada’s best performance in 36 years at the FIBA Women’s World Cup in September, making it all the way to the bronze medal match.

“We read articles and know that no one thought we’d make it out of our pool and here we are,” said star guard Kia Nurse, who returned from an 11-month layoff spent rehabbing after ACL surgery.

Where Canada had opened the Olympic tournament with a four-point loss to Serbia, they opened the World Cup with a seven-point victory over the same country. That was followed by 14-point wins against Japan and France, who won Olympic silver and bronze, respectively, at Tokyo 2020. After a tough three-point loss to Australia, they rebounded with an absolutely dominant victory over Mali.

That 4-1 record ranked them second only to Australia in their group as they advanced to the quarterfinals, where they defeated Puerto Rico handily. At that point, they knew they would finish among the top four, making it Canada’s best result At the FIBA Women’s World Cup since a bronze medal back in 1986.

Though they would lose the semifinal to a powerhouse American team and then drop the bronze medal game to the host Australians, the Canadian women came home from Down Under with their heads held high.

One of the brightest lights was Bridget Carleton, who ranked third in total points scored in the tournament but also earned praise from head coach Victor Lapena for what she did on defense. Kayla Alexander finished as the number two rebounder in the tournament.

Lapena came on board as head coach in January. His energy and enthusiasm may be just what the team needed to leave the past in the past and stay positive moving forward.