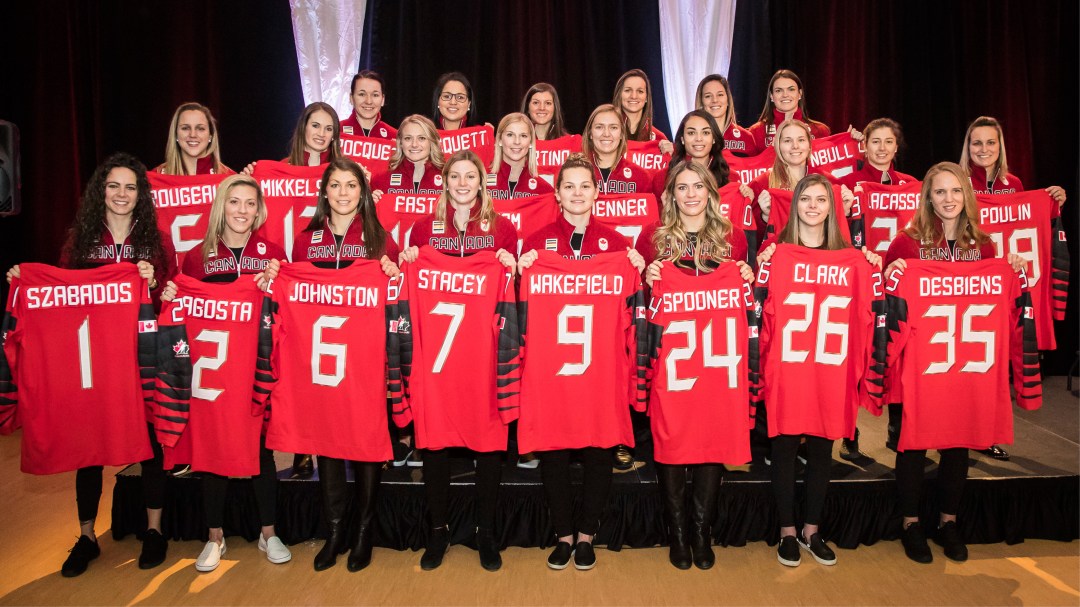 CALGARY (December 22, 2017) – Hockey Canada, in partnership with the Canadian Olympic Committee (COC), have announced the 23-player roster that has been nominated to represent Team Canada at the 2018 Olympic Winter Games, Feb. 9-25 in PyeongChang, South Korea.

“It was an extremely difficult decision narrowing down our roster due to the depth of talent on our team; we are excited to move forward with the 23 players chosen to represent Canada at the 2018 Olympic Winter Games,” said head coach Laura Schuler (Scarborough, Ont). “These players have worked hard to earn this moment and we are confident that they will be able to inspire and unite our country as they set their sights on a fifth straight gold medal for Canada.”

“It is a tremendous accomplishment to be chosen to represent your country at the Olympic Games,” said Renney, who was a member of the Canadian Olympic Team in 1994, where he guided the Canadian Olympic Men’s Hockey Team to silver as head coach. “We are thrilled with the 23 players selected and we know they will wear the Maple Leaf with great pride and will leave nothing to chance in their preparation for PyeongChang.”

The Canadian Women’s Olympic Hockey Team will look to win its fifth-straight gold medal at the Olympic Winter Games when the puck drops in South Korea on Feb. 11.

“Canada’s strong tradition of hockey talent is on display here, there is so much talent and depth on this team,” said Isabelle Charest, PyeongChang 2018 Team Canada Chef de Mission. “I am excited to watch them defend their gold medal in PyeongChang and can’t wait to cheer them on.”

PyeongChang 2018 will mark the sixth time women’s hockey has been part of the Olympic Winter Games. In addition to its four gold medals, Canada’s Women’s Olympic Hockey Team also claimed silver in 1998 in Nagano, Japan.

“Women’s hockey is one of Canada’s most successful events every Olympic Games and our Canadian athletes have never failed to win a medal since women’s hockey was added to the program in 1998,” said the Honourable Kent Hehr, Minister of Sport and Persons with Disabilities. “This includes gold medals at the last four Olympic Winter Games and with a reputation like that, all eyes will be on Canada in PyeongChang. Be sure to cheer on these great women as they make Canada proud.”

Prior to heading to PyeongChang, the team will resume its Esso Series schedule with five games against Alberta Midget Hockey League opponents in the New Year.

The Olympic women’s hockey tournament opens on Saturday, Feb. 10 at the Kwandong Hockey Centre and culminates on Thursday, Feb. 22 at the Gangneung Hockey Centre. Canada is scheduled to compete in Group A and begins preliminary-round play on Sunday, Feb. 11.

Note to media: All media requests regarding the Canadian Women’s Olympic Hockey Team are to be directed to Morgan Bell via email at mbell@hockeycanada.ca. Photos from Friday’s announcement can be downloaded by clicking here. Hockey Canada will also host a 2 p.m. ET/11 a.m. PT media teleconference, details are listed below: