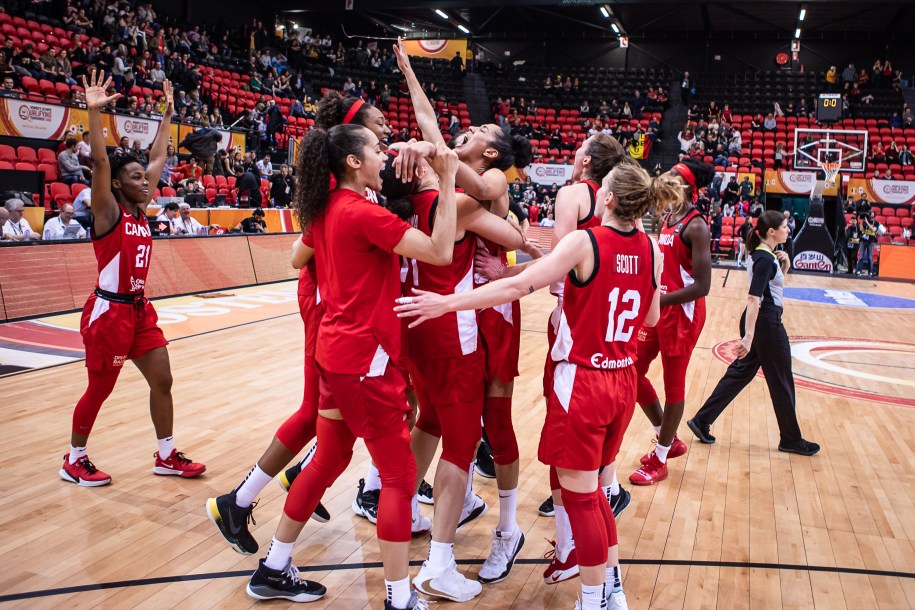 Team Canada made its mark around the world this weekend.

From Tokyo 2020 qualifications to double podiums and historic wins, it’s safe to say that this weekend was an eventful one for Canadian athletes. 👍

Take off ✈️ to Tokyo

Team Canada booked two tickets to Tokyo 2020 over the weekend in women’s soccer and women’s basketball.

On Friday night, Canada defeated Costa Rica 1-0 at the Concacaf Women’s Olympic Qualifying Tournament to secure their spot in Tokyo this summer. This marks the fourth consecutive Olympic Games that Canada will field a women’s soccer team. They came home from the last two with bronze medals.

READ: Team Canada leaves FIBA Olympic qualifiers with a spot in Tokyo and a perfect record

Canada’s women’s basketball team followed suit, punching their ticket to Tokyo as well. After beating Belgium in their opening game of the FIBA Women’s Olympic Qualification Tournament, Team Canada needed a win against Sweden to qualify. On Saturday, they rose to the occasion, posting a dominant 80-50 victory. Beating Japan in their final game on Sunday, they finished the tournament with a perfect 3-0 record.

Canada is proud of you, champ 🏆 pic.twitter.com/TpEigJ0K3H

Nick Taylor became the first Canadian to ever win the AT&T Pebble Beach Pro-Am, shooting a 2-under-par 70 on Sunday to claim a wire-to-wire four-stroke victory on the green. Not only was this his second-ever PGA Tour victory (just the seventh Canadian man with multiple PGA Tour wins), but it secured his spot at Augusta National for the Masters this April. That’ll put four Canadians in the Masters field, equaling the record.

We’ve Got a Need For Speed 😎

On the other side of the world, Steven Dubois skated to his first career gold medal at the ISU Short Track World Cup in Dresden, Germany on Sunday clocking in at 40.530 to win the 500m. 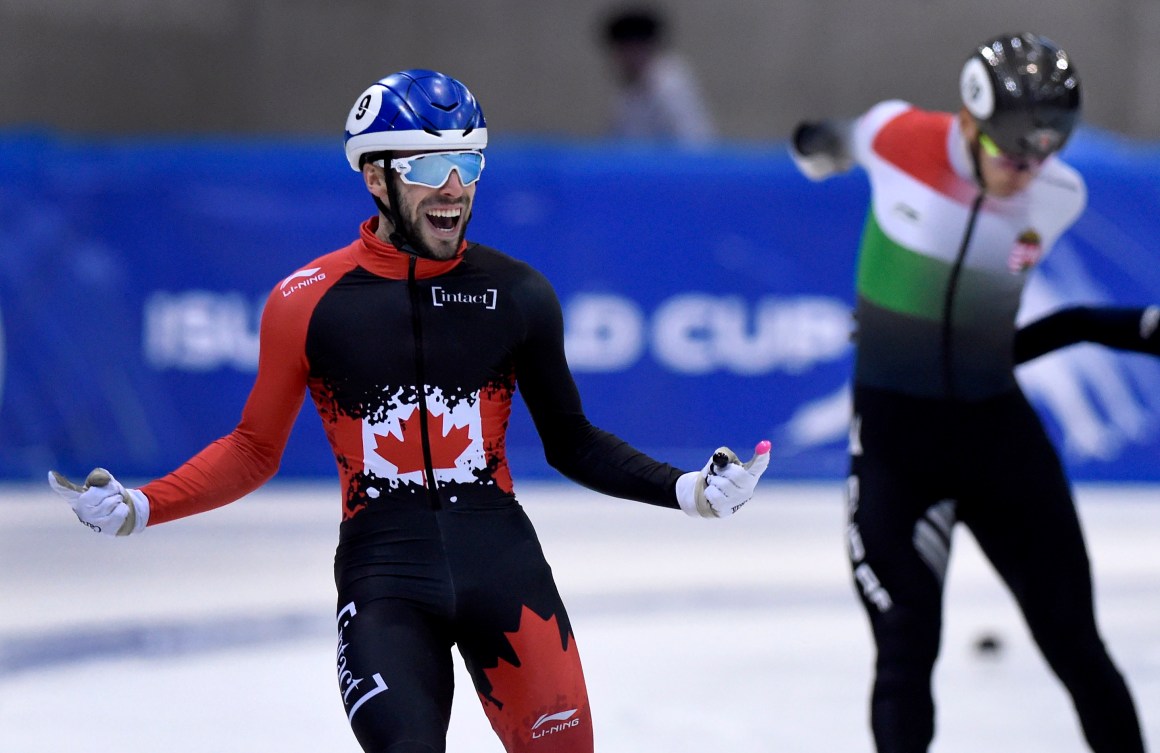 YEEHAW to a silver medal in the 1500m 🥈 AND my first Canadian Record!!!! It’s an absolute honour to now hold this title, @cindynklassen you will always be one of my biggest inspirations. Thank you to everyone who came out and supported us at our home World Cup 🖤 . . . . 📸 @davehollandpics . . @isuspeedskating @teamcanada @ssc_pvc @craigsenyk @truffysmom #schaatsen #speedskating #teamcanada #silver #worldcup #yyc #calgary #ohcanada

On the long track, Ivanie Blondin completed the ladies 1500m in a Canadian record time of 1:51.767 to capture silver at the ISU Speed Skating World Cup in Calgary, Alberta. This is Blondin’s first time holding a national record, as she surpassed the previous mark held by Cindy Klassen since 2005. 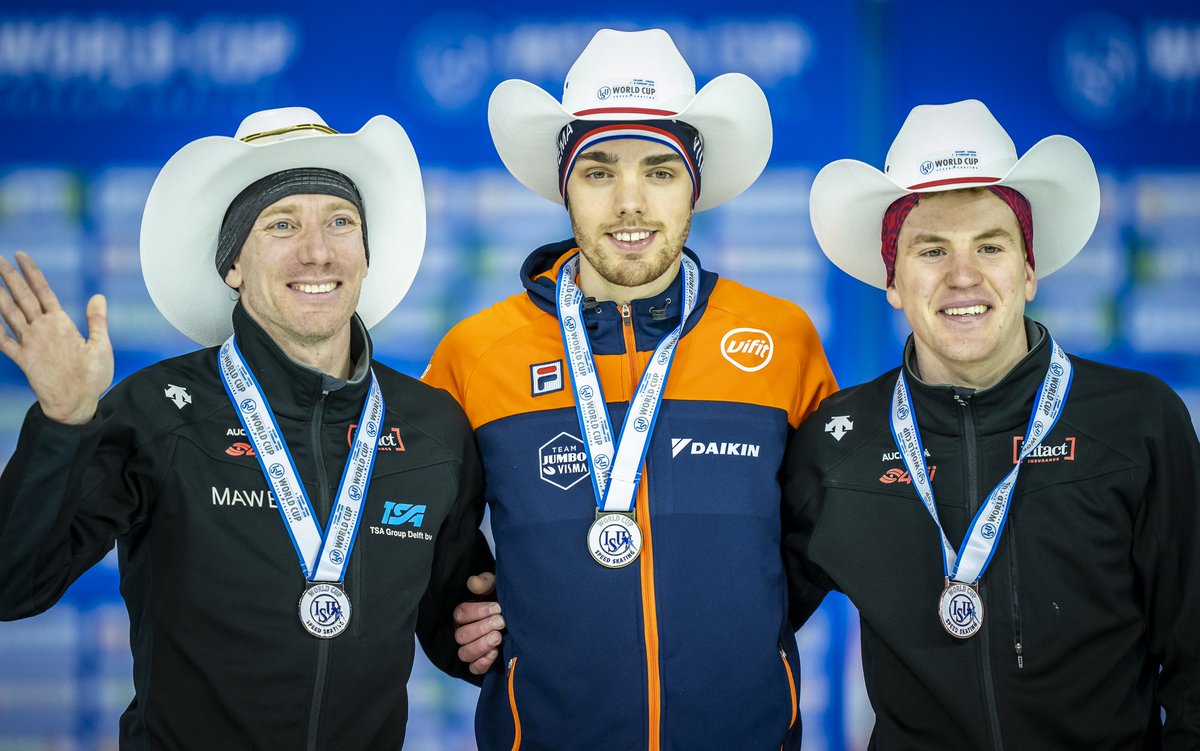 Ted-Jan Bloemen and Graeme Fish stand on the podium after capturing silver and bronze in the men’s 5000m at the ISU Speed Skating World Cup in Calgary, Alberta. Credit: Speed Skating Canada/Twitter

Blondin wasn’t the only Canadian on the podium in Calgary. On the men’s side, Ted-Jan Bloemen and Graeme Fish completed a double podium for Canada, capturing silver and bronze in the men’s 1000m. They were edged out by the Netherland’s Patrick Roest (6:07.404), who beat Bloeman by just 0.02 seconds.

Staying Sharpe on the Slopes 🏂

For this third consecutive week, Cassie Sharpe and Rachael Karker stood beside each other on the podium. This week, they took their talents to the Dew Tour at Copper Mountain, where they claimed women’s ski superpipe gold and silver. Sharpe was crowned the superpipe champion after putting up a score of 85.00 points, while Karker followed closely behind with a score of 83.00 for second place.

Another one done! So happy to land on the podium and to share it with @cassiesharpe once again 🥰 Excited to watch they boys get after it tomorrow! • @mackenzieinvest @swanygloves @zumaskis @dewtour

Canadian freeskier Noah Bowman also competed on the Dew Tour, where he won the men’s ski superpipe event with a score of 95:00 on his third and final run.

Mikaël Kingsbury and Justine-Dufour Lapointe each reached the top of the podium in dual moguls on Saturday night at Deer Valley Resort in Park City, Utah. Kingsbury skied to his 61st gold medal after a showdown with Frenchman Ben Cavet in the finals. Dufour-Lapointe also captured gold after putting up a score of 83.98 against American Hannah Soar. This was the second medal of the weekend for both Kingsbury and Dufour-Lapointe, who claimed silver and bronze respectively in the moguls.

A post shared by Justine Dufour Lapointe (@justinedufourlapointe) on Feb 9, 2020 at 3:58pm PST

Has a tennis player ever been endorsed by a Canadian Maple Syrup manufacturer? 🤔

Canadian tennis star Vasek Pospisil reached the Open Sud de France finals this weekend, where he was spotted recharging with some maple syrup during his match against Gael Monfils. That’s about as Canadian as it gets, folks.

Ice Dancing 🕺💃 to the Podium

Canada won two medals at the ISU Four Continents Figure Skating Championships in Seoul this weekend. Piper Gilles and Paul Poirier were first on the podium taking silver in ice dance, while Kirsten Moore-Towers and Michael Marinaro followed with a bronze in Saturday’s pairs competition. Next up will be the world championships in mid-March on home ice in Montreal.

Two medals were won by Team Canada over the weekend at the Paris Grand Slam. Christa Deguchi claimed gold in -57kg final earning her fourth Grand Slam Title. Antoine Valois-Fortier will be coming back from Paris with a bronze after defeating the reigning world champion in the -81kg match up.

Earlier today, Canada 🇨🇦 and the other teams from the #FIBAOQT helped clean the dunes near Ostend. #WeAreTeamCanada #StandOnGuard pic.twitter.com/K7Me9NWkEa

READ: Team Canada leaves FIBA Olympic qualifiers with a spot in Tokyo and a perfect record

Before sweeping the competition in the FIBA Olympic qualifiers, Team Canada helped locals in an effort to clean up dunes near Ostend, Belgium. They were joined by other teams participating in the tournament in their clean-up efforts.