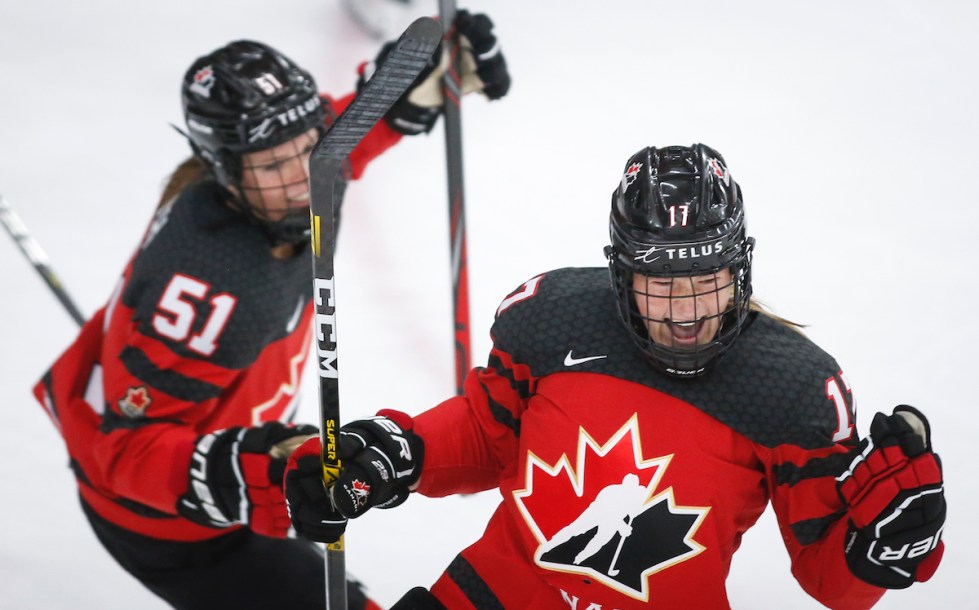 It may be the dog days of summer but Team Canada athletes have been hard at work over the past week.

From the ice, to the pool, to the track and beyond, let’s take a look at the weekend that was plus the week ahead.

22-year-old Marco Arop made his Olympic debut at Tokyo 2020 this summer and the confidence has seemingly gone straight to his legs.

Last weekend he won gold in the 800m at the Diamond League stop in Eugene, Oregon, beating out Tokyo 2020 gold and silver medallists Emmanuel Korir and Ferguson Rotich of Kenya.

Arop followed that up with another golden performance on Thursday in Lausanne, Switzerland, winning the 800m while outpacing the Kenyans once again.

This past Saturday, Arop completed the podium hat trick, claiming bronze in the 800m in Paris, France with a time of 1:44.74 — his fastest run of the week.

Along with Arop, Aaron Brown had a strong week of his own in the Diamond League. After finishing fourth in the 200m in both Eugene and Lausanne, the three-time Olympian captured bronze in Paris with a time of 20.20s.

Masse and McIntosh make a splash at ISL season opener 🏊

Kylie Masse and Summer McIntosh stole the show for the Toronto Titans in the first match of the International Swimming League season in Naples, Italy late last week.

McIntosh, Canada’s youngest athlete at Tokyo 2020 who celebrated her 15th birthday earlier this month, won gold in the women’s 200m butterfly with a time of 2:06.61. She added another victory in the women’s 400m individual medley, finishing in 4:30.05.

Meanwhile it was a Canadian sweep for the top three spots in the women’s 200m individual medley final for Bailey Andison, Harvey, and Kayla Sanchez, respectively. Andison’s time of 2:06.44 was good for gold as Harvey took silver (2:06.62) and Sanchez won bronze (2:09.63).

On the men’s side, Finlay Knox finished third in the men’s 100m individual medley, touching the wall in 52.44s.

Competition for Canadian swimmers with their respective ISL teams runs until September 30. At the end of 11 matches, the best eight teams will take part in the elimination matches, leading to the grand finale where champion team will be crowned. Unlike the Olympic Games, where swimming events take place in a 50m pool, ISL competitions take place in a short course pool and are 25m. See the full schedule here.

The IIHF Women’s World Championship made its return to the ice in Calgary, Alberta this August after a two-and-a-half year absence due to the COVID-19 pandemic. But even after all that time, Team Canada is showing no signs of rust.

Canada went undefeated through the preliminary rounds, outscoring their opponents 20-5 over four games. On Saturday they took on Germany in the quarterfinals, coming out on top with a 7-0 win while outshooting them 52-3.

As the top seed in the tournament, Canada will face the lowest remaining seed, Switzerland, in the semifinal. The puck drops at 7:00 p.m. ET on Monday as they play for a berth in the gold medal game.

The Canadian Short Track Championships wrapped up on Sunday in Montreal with Kim Boutin and Steven Dubois coming out on top to retain their titles as national champions.

Boutin took first in the women’s division with a final score of 40,000 points. She won the 500m and 1000m national titles by counting two race victories in each of those two distances.

Dubois earned the crown on the men’s side with 38,000 points as he won the 1000m national title with two race victories. He also recorded one victory and one second place finish in both the 500m and 1500m, allowing either distance to count towards his overall total.

Courtney Sarault finished second overall among the women with 34,000 points while Florence Brunelle took third with a score of 30,496. Pascal Dion took second in the men’s division with a final score of 34,400 as Jordan Pierre-Gilles finished third with 27,920 points.

As the six highest-scoring skaters, Boutin, Sarault, Brunelle, Dubois, Dion, and Pierre-Gilles were all automatically selected for the Special Olympic Qualification Competitions (SOQC) Racing Pool. This group of skaters will represent Canada on the ISU World Cup circuit later this fall.

The remaining three places per gender in the SOQC Racing Pool will be awarded in accordance with the 2022 Short Track Olympic Selection Policies and Procedures at a later date.

Cycling to the mountains podium 🚵‍♀️

Alison Jackson competed in the 2021 Holland Ladies Tour. She won stage one, for her first ever UCI Women’s World Tour victory, and earned the yellow jersey to wear for stage two.

For four days Jackson also wore the Queen of the Dutch Mountains jersey, and finished second overall in the mountain classification with 19 points.

The International Tennis Federation (ITF) confirmed on Friday that Canada, the highest-ranked winning nation at the Play-Offs in April, will replace former host nation Hungary in Group A of the Billie Jean King Cup this November.

The Billie Jean King Cup Finals were originally scheduled to take place in Budapest, Hungary in April 2020 but were ultimately postponed twice.

Now hosted in partnership with the Czech Tennis Association, the Finals are set to be played at the O2 Arena in Prague from November 1-6, 2021.

Canada will be grouped with defending champions France and the Russian Tennis Federation (RTF) team.

Canada’s tennis stars take on the US Open 🤩

With the US Open set to begin on Monday, there will be plenty of Canadians taking to the court — seven in fact!

Twelfth-seed Félix Auger-Aliassime will be the first Canadian man on the court as he takes on Russian Evgeny Donskoy at 11:00 a.m. ET.

On the women’s side, Rebecca Marino will play against fifth-seeded Elina Svitolina of Ukraine at 11:00 a.m. ET, while Leylah Fernandez takes on Ana Konjuh of Croatia at the same time.

On Tuesday seventh-seeded Denis Shapovalov opens his tournament against Argentinian Federico Delbonis at 11:00 a.m. ET. Vasek Pospisil will play at the same time against No. 28 seed Fabio Fognini of Italy.

Bianca Andreescu comes into the tournament as the No. 6 seed on the women’s side. She will face Viktorija Golubic of Switzerland at 7:00 p.m. ET on Tuesday evening. Andreescu made history in 2019 by winning the US Open, becoming the first Canadian to claim a Grand Slam singles title.

Doubles action begins on Wednesday as Fernandez teams up with Erin Routliffe of New Zealand against Giuliana Olmos of Mexico and Christina McHale of the United States.

Gaby Dabrowski, who won the women’s doubles title at the Canadian Open in Montreal just a couple weeks ago, will be in action with partner Luisa Stefani of Brazil. The duo will take on Viktorija Golubic of Switzerland and Tamara Zidanšek of Slovenia on Wednesday.