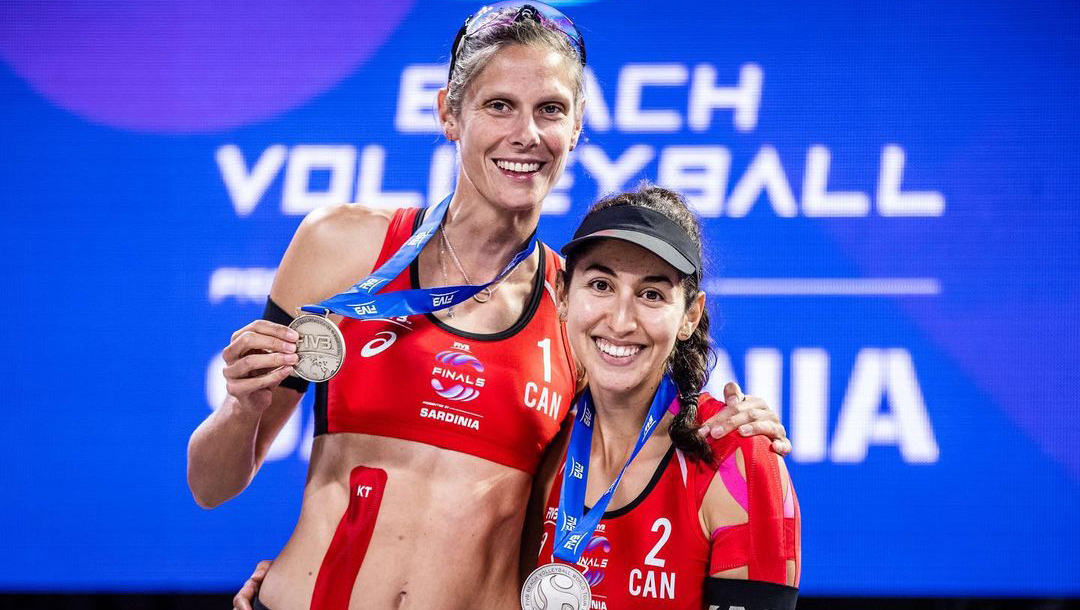 Team Canada athletes had quite the eventful week, competing on the wrestling mat, tennis court, and beyond. A few women’s soccer players received nominations for the Ballon d’Or while one Team Canada athlete will be inducted into Canada’s Walk of Fame later this year.

Read on to find out who’s been making all the headlines!

READ: Pavan and Humana-Paredes serve up silver at FIVB World Tour in Cagliari

It was a near perfect run at the FIVB World Tour Finals, the final event of the season, for reigning world champions Sarah Pavan and Melissa Humana-Paredes.

The Canadian duo were a perfect 4-0 through the preliminary stage, dropping just a single set along the way. By finishing as the top seed in their group they earned a berth in the semifinal, where they matched up against the Tokyo 2020 Olympic champions, April Ross and Alix Klineman of the United States.

Although Humana-Paredes was bothered by a shoulder injury, the pair prevailed in Saturday’s semis, taking the match 21-15, 21-12 to advance to the final.

The Canadians faced off against the German team of Julia Sude and Karla Borger on Sunday in the final. Sude/Borger took the first set 21-13. In the second set, the teams traded points until it was 21-21, where the Germans took control, winning the set 23-21 to take gold.

With the silver medal, the Canadian duo now have 14 podium finishes together on the World Tour.

Samantha Stewart earned another medal for Team Canada this past week, taking bronze in the women’s 53kg category at the 2021 Wrestling World Championships in Oslo, Norway on Wednesday.

The event marked Stewart’s first time competing at the world championships. Her most recent podium finishes were third at the Olympic Games Qualifier in May 2021, and third at the Matteo Pellicone Ranking Series in March 2021.

Damian Warner announced as inductee to Canada’s Walk of Fame 🍁

Damian Warner, the “World’s Greatest Athlete,” was announced as an inductee to Canada’s Walk of Fame on Wednesday, joining nine others as the latest Canadians to receive the honor.

Warner’s final score of 9018 points also set an Olympic record and a Canadian record. It was the first time Warner surpassed the 9000-point mark as he became just the fourth decathlete in history to reach the plateau.

He’ll be joined by other notable names such as actor Keanu Reeves and wrestler Bret “The Hitman” Hart at the December 4 Walk of Fame Gala.

Leah Kirchmann pedaled to a third-place finish in the third stage of the Women’s Tour in Atherstone, England on Wednesay.

Demi Vollering of the Netherlands placed first in the time trial stage with a time of 23:18 while Joscelin Lowden of the United Kingdom finished second, 1:04 back of Vollering’s pace. Kirchmann was just one second slower than Lowden to take third.

The 10-mile course was the first ever individual time trial in the history of the Women’s Tour—a homage to the British time trialling heritage.

Mike Woods was in on the road in two races in Italy. The Canadian cyclist first placed fifth in the Milano Torino race, before finishing ninth at Il Lombardia.

After winning a historic Olympic gold this summer, the accolades keep rolling in for members of the Canadian women’s soccer team.

On Friday it was announced that Christine Sinclair, Jessie Fleming, and Ashley Lawrence were all nominated for the Ballon d’Or as the world’s top soccer player of the year.

Sinclair, who captained Canada to gold at Tokyo 2020, is the all-time leading scorer in international football with 187 goals.

26-year-old Lawrence has gained recognition for her play over the last few years, most notably being named the 2019 Canadian Soccer Player of the Year.

Finally, 23-year-old Fleming is the youngest Canadian nominee. She scored three goals (all penalties) for Canada en route to their Olympic victory.

The Ballon d’Or has been awarded to men since 1956 while the women’s award has been handed out since 2018. This year’s recipients will be announced on November 29 with 50 journalists deciding the women’s winner. No Canadian soccer player has ever won the award or finished top-three in voting.

The senior men’s soccer team played two matches as part of the 2022 FIFA World Cup qualification this week, earning draws with both Mexico and Jamaica.

The Canadian men kicked off the week Thursday evening with an important match against top-seeded Mexico. Team Canada earned a crucial point at the raucous Azteca Stadium in a 1-1 draw. After going 1-0 in the 21st minute, Jonathan Osorio responded for Canada in the 42nd, scoring the nation’s first goal on Mexican soil in 41 years.

Canada was 0-6-1 against Mexico all-time at Azteca and had been outscored 16-0 there over the last four matches.

The team travelled to Kingston, Jamaica for their Sunday match against Team Jamaica, where the game ended in a 0-0 draw.

With the two draws, Canada remains undefeated in their qualifiers with seven points (1-4-0), sitting fourth in the eight-team group. Each team will play a total of 14 games with the top three teams earning qualification to the 2022 FIFA World Cup. The fourth-place team will advance to inter-confederation playoffs for a final chance to earn a World Cup berth.

Canada is in action again on Wednesday as they take on Panama. Kickoff is set for 7:30 pm ET at BMO Field in Toronto.

Leylah and Denis play on at Indian Wells 🎾

US Open runner-up Leylah Fernandez was victorious in the round of 32 on Sunday, defeating Anastasia Pavlyuchenkova of Russia 5-7, 6-3, 6-4. The 19-year-old needed to rally back after dropping the first set but found her game to beat the No. 9 seed. She will face American Shelby Rogers on Monday afternoon.

READ: Fernandez’s outstanding US Open run ends in the final

Defending champion Bianca Andreescu is out of the tournament after falling in the round of 16 to Estonian Anett Kontaveit 7-6 (5) and 6-3. The 21-year-old and Ashleigh Barty met up with tennis legend Billie Jean King while at the tournament.

While Denis Shapovalov may be out of the men’s singles tournament, he is still competing in men’s doubles with Rohan Bopanna. The pair reached the round of 16 after defeating fellow Canadian Félix Auger-Aliassime and Polish player Hubert Hurkacz. Shapovalov and Bopanna will play German pair Alexander Zverev and Jan-Lennard Struff on Monday evening.