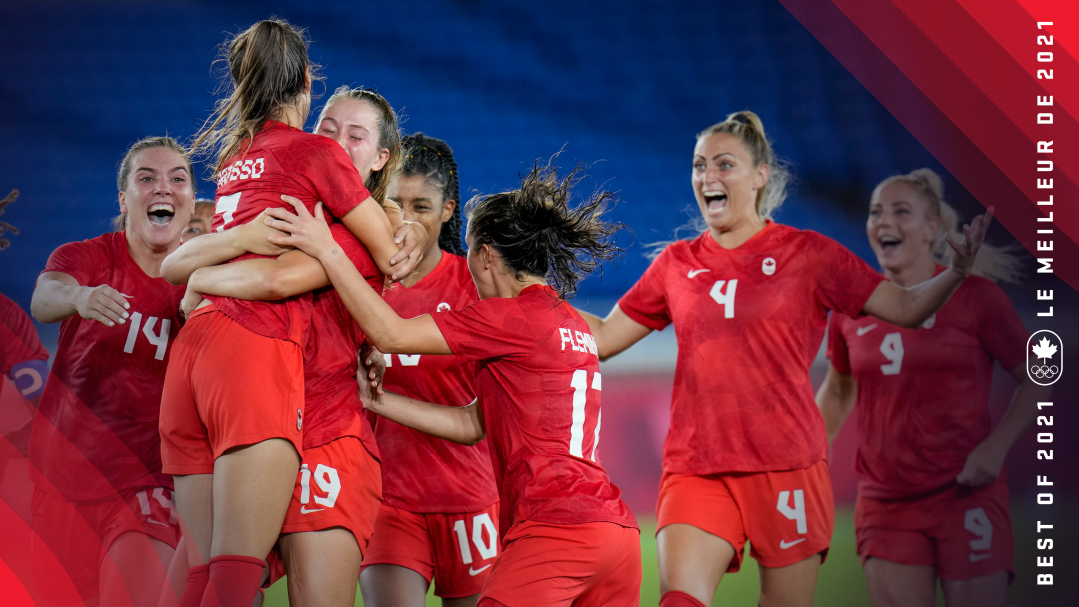 The women’s national soccer team had made it abundantly clear.

Their goal heading into Tokyo 2020 was to change the colour of the medal. Following back-to-back bronzes at London 2012 and Rio 2016, the third step of the podium was not enough. This team believed they could play in the gold medal game despite being ranked eighth in the world at the start of the Olympic tournament.

It was approaching midnight in Tokyo, mid-morning in Toronto, and breakfast time in Vancouver on August 6 when Julia Grosso sent the nation into celebration. The 20-year-old had just scored the golden goal for Canada, giving her team the victory in penalty kicks against Sweden.

The impact of the win will likely be felt for decades as soccer’s next generation of stars will take inspiration from the heroic performance. But for now, we’ll continue to relish in the victory.

Here’s a look back at how Canada’s women’s soccer team went to the top at Tokyo 2020:

In her 300th game for Canada, Christine Sinclair scored in just the sixth minute of play in a 1-1 draw against host Japan. Goaltender Stephanie Labbé made a key save on a penalty kick to preserve Canada’s 1-0 lead, before Japan responded in the 84th minute with an equalizer.

Canada got their first win of the tournament thanks to the foot of forward Janine Beckie, who netted both goals in a 2-1 victory over 37th-ranked Chile, playing in their first Olympic Games.

While some of the veterans were rested, Canada came away with a 1-1 draw against Great Britain to advance the quarterfinals. Adriana Leon provided Canada’s goal in the 55th minute.

In a rematch of the Rio 2016 bronze medal game; Brazil was out for revenge. After the match ended in a scoreless draw, Labbé saved the day in the penalty shootout, making critical stops on the fourth and fifth kicks to give Canada the dramatic win.

In the semifinal, it was time for Canada to get some revenge for a heartbreaking loss at London 2012 as they beat the number one ranked United States, 1-0. The lone goal came off a penalty kick courtesy of Jessie Fleming, as Canada got its first win over the U.S. in a senior international match since 2001.

READ: Team Canada to play for soccer gold after upset over top-ranked USA

After the gold medal game against Sweden ended 1-1 through regulation and extra time, it was time for another high pressure penalty shootout. It came down to Julia Grosso to provide an iconic Olympic moment as her goal ended the shootout 3-2 in Canada’s favour.

At age 38, Sinclair was one of three players on the team who now owned three Olympic medals. Eleven players earned their second. One of those is midfielder Quinn, who became the first openly transgender and non-binary athlete in any sport to ever win an Olympic medal.

It’s possible that the best is still yet to come for Canada. Ten players who took gold in Tokyo won’t even be 30 by the time Paris 2024 rolls around. In the meantime, we’ll just keep on reliving this gold medal moment over and over and over and over…