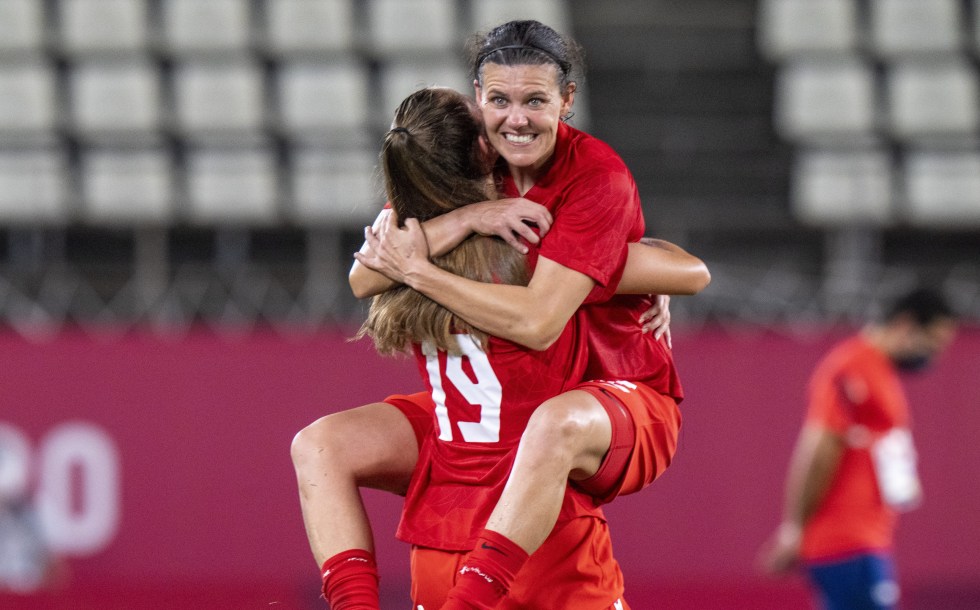 Christine Sinclair has been climbing this mountain for a very long time, and she’s now oh-so-close to the summit.

In 22 years with the senior national team, Canada’s talismanic captain has become the most prolific goal scorer in the history of international soccer. She’s won the Lou Marsh Award as Canada’s top athlete of the year and been inducted to Canada’s Walk of Fame. She’s helped Canada earn two Olympic bronze medals, at London 2012 and Rio 2016.

But the 38-year-old has never played for gold at a major international tournament. Now, following Canada’s shocking upset of the United States in the semifinal, Sinclair and her teammates will finally get that opportunity.

In that semifinal, Canada avenged their heartbreaking loss to the USA at London 2012. In the final against Sweden (Friday, 8 a.m. ET), they’ll be trying to get revenge against the team that knocked them out in the Round of 16 at the 2019 FIFA Women’s World Cup.

It won’t be easy against a strong Swedish side that defeated the USA 3-0 earlier in this competition. With the team having played five games in 13 days in hot, muggy conditions, it’s yet to be seen how much any of the players will have left in the tank.

But whatever they’ve got left, they’re going to leave out on the field.

“We’ve come this far,” said Team Canada head coach Bev Priestman after the semifinal match. “The group won’t go out into that final just happy to be there and go home with silver.

Indeed, 21 of those 22 players have seen the pitch during this tournament, a testament to Priestman’s efforts to build a well-balanced squad. Long gone are the days when Canada was a one-woman show, featuring Sinclair and her supporting cast.

Central defender Kadeisha Buchanan and fullback/midfielder Ashley Lawrence, lifelong friends who both play professionally in France, are among the best in the world at their positions.

Forwards Janine Beckie, Deanne Rose, Adriana Leon and Nichelle Prince have given Canada dynamic options in the attack. In the midfield, Quinn and Jessie Fleming have provided stability and vision.

Those core players were all kids in the 2000s, when Sinclair guided Canada to a first-ever Olympic appearance at Beijing 2008.

Then they were teenagers, watching in awe along with the rest of us, as Sinclair and her contemporaries took Canada to the podium for the first time in London.

They are the living, breathing embodiment of the inspirational impact often attributed to Sinclair’s efforts over the past two decades.

That is to say, Sinclair hasn’t inspired some abstract collection of kids who might one day grow up to play the game at the highest level. Those kids are already here, right in front of our eyes, shoulder to shoulder with Sinclair and ready to play for an Olympic gold.

“We were clear that we definitely wanted to change the colour of the medal,” said Priestman. “We’ve got bags of talent in the team. I’m clear that winners win, and we’re absolutely going into this final to get a gold medal.”

Regardless of the result in Thursday’s final, one can assume this core will likely remain largely intact in the run-up to Paris 2024. They’ll also be complemented by the likes of Kailen Sheridan, Vanessa Gilles, Julia Grosso and Jordyn Huitema, all of whom made their Olympic debuts in Tokyo.

Will Sinclair be with them? She does turn 41 prior to the next Olympics. Then again, she’s adjusted her playing style over the years to remain competitive, and we did see 43-year-old Formiga did take the field for Brazil at Tokyo 2020.

One way or another, the Canadian team now exists in a totally different realm than they did when Sinclair first suited up all those years ago. Back then, simply reaching the Olympics was the target. Going forward, the expectation will be a podium finish.

There will be a lot of pressure to face, and a lot of hard work to be done. But if there’s any team that can handle it, it’s one that’s grown up in Sinclair’s supportive shadow.