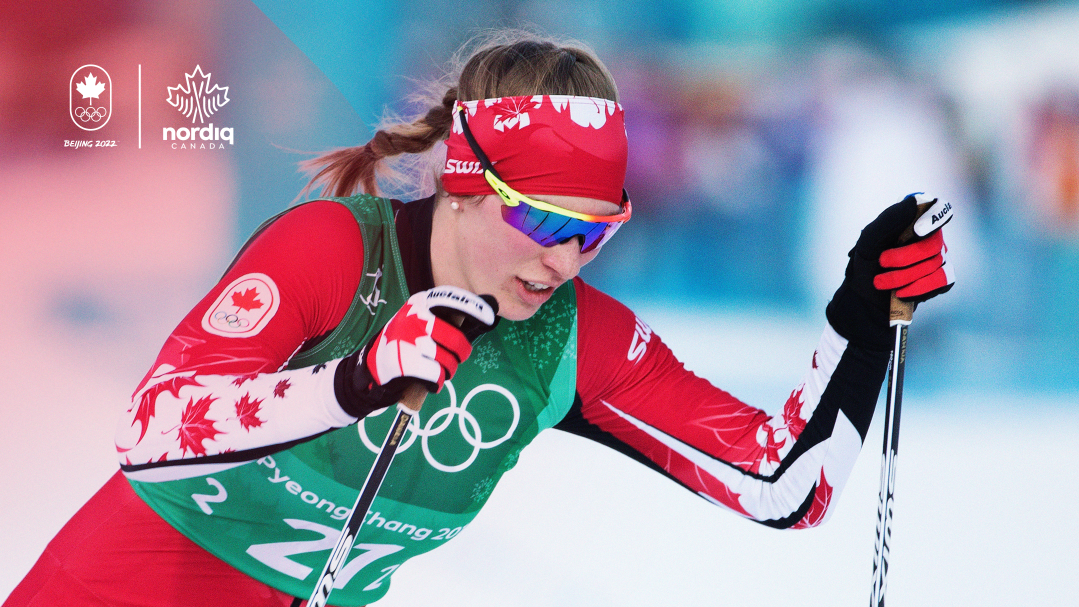 Canada will be represented by a team of five women and four men in cross-country skiing at Beijing 2022.

The years since PyeongChang 2018 have been a time of great turnover for cross-country skiing in Canada. The only returning athletes from the last Olympic team are Cendrine Browne and Dahria Beatty on the women’s squad.

But that provides an incredible opportunity for the next generation of Canadian talent to get their first taste of Olympic experience.

The four men nominated to the team – Antoine Cyr, Rémi Drolet, Olivier Léveillé, and Graham Ritchie – are all under the age of 24. They all secured their spots based on their international performances over the last year.

Cyr, Drolet and Ritchie all competed at their first senior FIS World Championships in 2021. Cyr and Ritchie joined forces for an impressive seventh-place finish in the team sprint when they were the only under-23 duo in the final. Individually, Cyr was Canada’s top man in several different types of events at the world championships, including the sprint, skiathlon and 50km mass start.

All three men men also attended their third straight U23 world championships in 2021. They competed in their first World Cup events in 2019 when Canada hosted the World Cup Finals in Quebec City. Cyr achieved a career best in late November when he finished 11th in the 15km classic race at the World Cup season opener in Ruka, Finland.

“Today is a dream come true and my whole focus now is on getting ready for the Olympics,” said Cyr.  “I have worked very hard and kept believing. I’m super happy. Hopefully, I can represent the maple leaf well by throwing down some good races.”

Léveillé competed in his first World Cup events this season after a breakout performance at the 2021 FIS World Junior Championships. He won bronze in the 10km freestyle race to become just the third Canadian cross-country skier to ever win an individual medal at the junior worlds. At the 2020 World Juniors, he had been part of a historic silver medal in the men’s 4x5km relay, Canada’s first ever relay medal at any cross-country world championships.

On the women’s side, Katherine Stewart-Jones will be making her Olympic debut after representing Canada at three senior worlds, two under-23 worlds, and three junior world championships. Still just 26, she has been competing in World Cup events since 2016. In 2020-21, she became the top-ranked Canadian woman in the overall World Cup standings.

“I’m really excited to be heading to my first Olympics. It is something I’ve always wanted to accomplish, and it is crazy that it is finally here,” said Stewart-Jones. “I’m very excited about our whole team. We’ve made a lot of progress over the last few years and I’m looking forward to showing the world what we can do.”

The other newcomers on the women’s team are Laura Leclair and Olivia Bouffard-Nesbitt. Leclair competed at her first senior world championships in 2021 after appearing at the U23 worlds in 2018 and 2020. She’ll only be 25 at the Games. Until this season, her World Cup experience had come exclusively on Canadian snow in 2017 and 2019. Bouffard-Nesbitt’s only world championship appearance was in 2015. She finished third in the freestyle sprint at the Canadian trials in early January.

Beatty and Browne joined with Stewart-Jones and Leclair to break through for a ninth-place finish in the 4x5km relay at the 2021 World Championships. It was Canada’s best result in the women’s relay at the worlds in 20 years. Beatty followed up a few weeks later by matching her career-best individual result on the World Cup circuit when she finished 15th in a 30km pursuit race in Engadin, Switzerland.

Canada has won three Olympic medals in cross-country skiing, but none since Turin 2006 where Chandra Crawford won sprint gold and Beckie Scott and Sara Renner took silver in the team sprint. That followed Scott’s gold in the pursuit at Salt Lake City 2002.

With six events each for men and women, cross-country skiing will take place over the duration of Beijing 2022, with the first competition on Day 1, February 5. The last event on February 20, the women’s 30km mass start, will also be the last event across all sports just before the Closing Ceremony. Cross-country skiing will take place at the Zhangjiakou Cross-Country Centre.