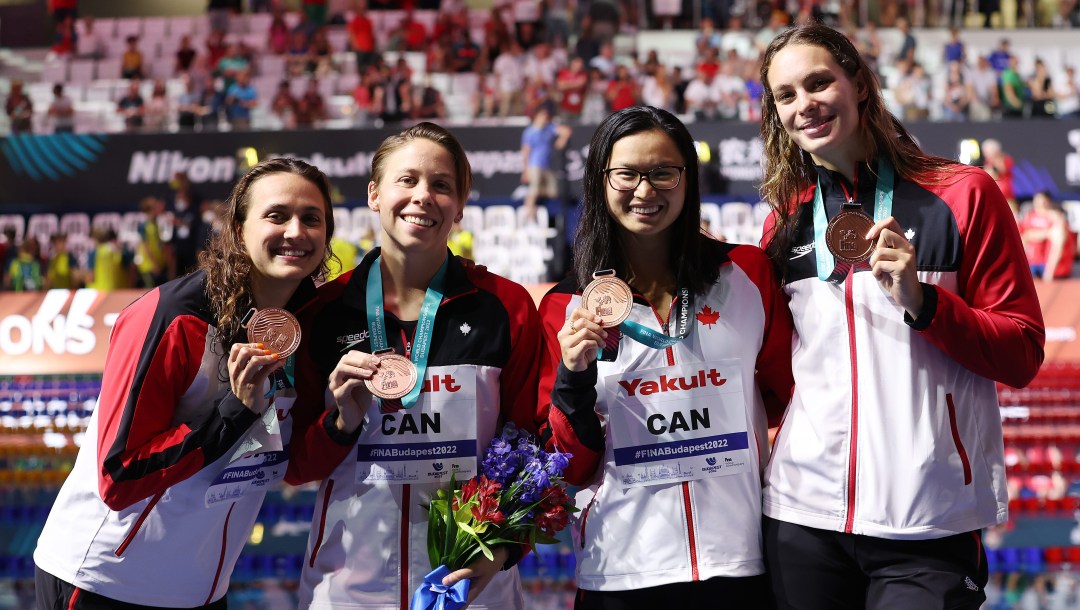 Over the weekend, Canadian athletes were busy capturing historic medals in the pool and on the court.

Canadian swimmers wrapped up their best ever FINA World Aquatics Championships while a quartet of basketball players claimed Canada’s first ever women’s FIBA 3×3 World Cup medal in their debut.

Keep reading for more on the latest Team Canada results:

Team Canada won a total of 11 medals in the swimming pool at the FINA World Aquatics Championships in Budapest, Hungary. This is the most ever in Canadian history at the Worlds.

Teenage sensation Summer McIntosh became a double world champion in the 200m butterfly and 400m individual medley. In both events, she set the world junior records. She also lowered her own national record in the 200m fly. McIntosh had opened the worlds by winning silver in the 400m freestyle. The 15-year-old is the first Canadian swimmer to win two gold medals at one edition of the long course worlds.

Kylie Masse won the world title in the 50m backstroke to go with her silver medal in the 100m backstroke. Joshua Liendo also won two individual bronze medals in the 100m butterfly and 100m freestyle.

Canada reached the podium in all three women’s relays, winning silver in the 4x100m freestyle along with bronzes in the 4x200m freestyle and 4x100m medley. There was also a silver medal in the mixed 4x100m freestyle relay. Penny Oleksiak was part of all four relays, increasing her career medal count at the long course worlds to nine, the most ever by a Canadian swimmer.

In their FIBA 3×3 World Cup debut, Kacie Bosch, Paige Crozon, Katherine Plouffe and Michelle Plouffe collected Canada’s first ever medal, a silver, in Antwerp, Belgium. Seeded 13th, the Canadians went 3-1 in pool play before knocking off top-seed Germany (22-13) in the first round of the playoffs.

That was followed by wins over the United States (14-10) and Lithuania (16-14) in the quarterfinals and semifinals. The win streak came to an end with a 16-13 loss to second seed France in the gold medal game

Sarah Mitton crushed her own Canadian record in the women’s shot put with the farthest throw in the world this season. She fired her last throw 20.33 metres at the Bell Canadian Track & Field Championships on Saturday afternoon in Langley, B.C. to set the new national mark by 75cm.

Some of the other notable results from the Canadian championships included Aaron Brown sweeping the titles in the men’s 100m and 200m for the fourth time in his career, Liz Gleadle winning her 11th straight javelin title, and victories for Marco Arop (men’s 800m), Camryn Rogers (women’s hammer throw), Django Lovett (men’s high jump), Alysha Newman (women’s pole vault) and Evan Dunfee (men’s 20km race walk). The big event on the horizon is the World Athletics Championships which start July 15 in Eugene, Oregon.

On Sunday morning, one of the longest-standing Canadian records was broken. Ben Flanagan broke a 35-year-old mark in the 10km event. He finished in 28 minutes 11 seconds in Boston, smashing the previous national record of 28:17, set by Paul McCloy in 1987.

At the FIG Trampoline World Cup in Coimbra, Portugal, Sophiane Méthot posted a score of 53.990 to capture the bronze medal in the women’s individual trampoline. In men’s synchronized trampoline, the Canadian duo of Jérémy Chartier and Rémi Aubin won a pair of bronze medals after posting a score of 48.730.

When wrestling in Rome 🥇🥉

Canada won two medals in women’s wrestling at the Matteo Pellicone event in Rome on Friday. Madison Parks won gold in the 50kg event, while Samantha Stewart claimed bronze in the 53kg event.

The quartet of Tyler Mislawchuk, Emy Legault, Charles Paquet and Dominika Jamnicky matched Canada’s result from the 2019 World Championships with their fifth-place finish in the mixed relay in Montreal. That followed Legault placing 12th in the individual race for her career best World Triathlon Championship Series result.