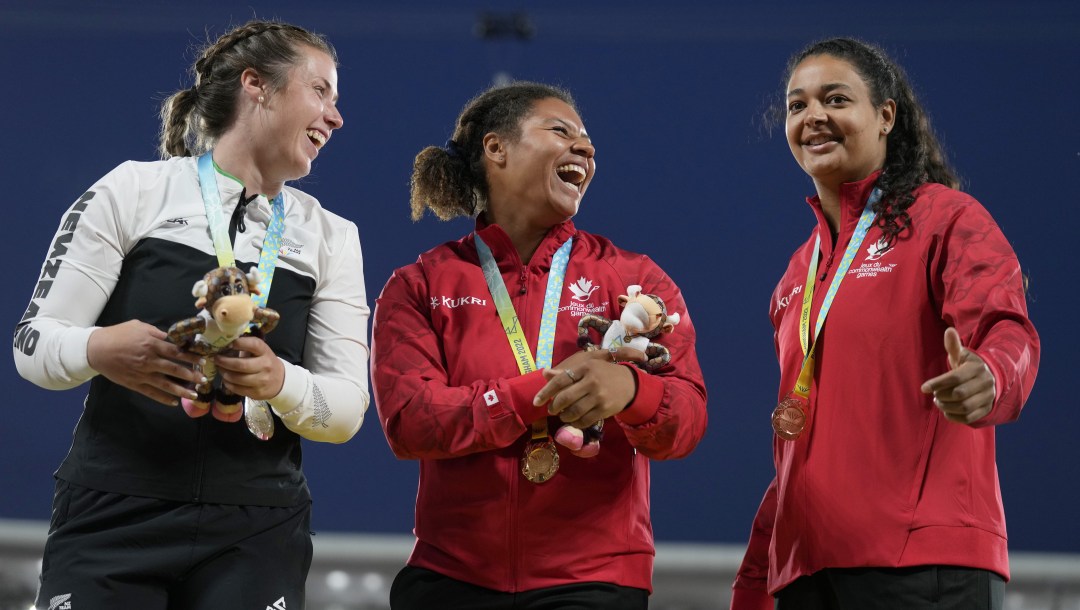 Before the curtain came down on the 2022 Commonwealth Games in Birmingham, England on Monday, Team Canada athletes turned up the heat over the weekend and added more than 30 medals to the country’s tally.

Meanwhile, on this side of the Atlantic, multiple Canadians paddled to the podium at the ICF Canoe Sprint World Championships in Halifax, headlined by Olympic medallist Katie Vincent and her hat trick of gold medals.

Keep reading for a recap of this weekend’s highlights:

Team Canada’s final medal count at the 2022 Commonwealth Games includes 26 gold, 32 silver and 34 bronze. That ranks the country third in the medal standings behind Australia (178 medals) and England (176 medals).

Among the highlights from the final few days of competition:

Canada won 12 medals in wrestling, tying with India for the most in the sport. There were three gold medals in that total as Amar Dhesi won the men’s freestyle 125kg event, Nishan Randhawa won the men’s 97kg freestyle event, and Justina Di Stasio won the women’s 76kg event.

Camryn Rogers continued her impressive climb in the world of women’s hammer throw as she won the gold medal after setting a Commonwealth Games record in the qualification round. She was joined on the podium by teammate Jillian Weir, who won bronze 20 years after her father Robert won his own bronze in discus at the 2002 Commonwealth Games.

Olympic bronze medallist Evan Dunfee was spectacular on Sunday as he marched to gold in the men’s 10km race walk while setting Canadian and Commonwealth Games records. Canada also won gold in the women’s 4x400m relay.

Canada won four medals in boxing, highlighted by reigning world champion Tammara Thibeault taking the gold medal in the women’s 75kg event. She is the first Canadian woman to ever win Commonwealth Games gold in boxing.

Sarah Pavan and Melissa Humana-Paredes successfully defended the gold medal they won four years ago when beach volleyball was included for the first time at the Commonwealth Games. In the final they defeated an Australian duo in three sets. That followed a silver medal by Sam Schachter and Daniel Dearing who had lost their final to another Australian team.

Canada won five medals in rhythmic gymnastics, the most of any country. After gold in the team event, Carmel Kallemaa won silver in the clubs and bronze in the ribbon and hoop while Suzanna Shahbazian claimed silver in the ball.

Canada’s last medal won in Birmingham was a silver by Michelle Li in badminton. She lost the women’s singles final to former world champion and two-time Olympic medallist P.V. Sindhu of India.

A year after she became an Olympic medallist, Katie Vincent stood atop the podium three times at the ICF Canoe Sprint World Championships in Halifax.

All of her victories came in non-Olympic events, as Vincent paddled to gold in the women’s C-1 5000m and was part of the women’s C-4 500m and mixed C-2 500m gold medals, the latter with Connor Fitzpatrick. Vincent finished fifth in the C-1 200m which is part of the Olympic program. She and Sloan Mackenzie placed sixth in the C-2 500m.

Another Diamond League medal for Mitton

Just three days after she won gold at the Commonwealth Games, Sarah Mitton made her way to Poland where she won shot put bronze at the Diamond League meet in Chorzow. It was her second Diamond League podium of the season as she threw 19.44 metres. Mitton has qualified for the Diamond League Finals which will take place in Zurich in early September.