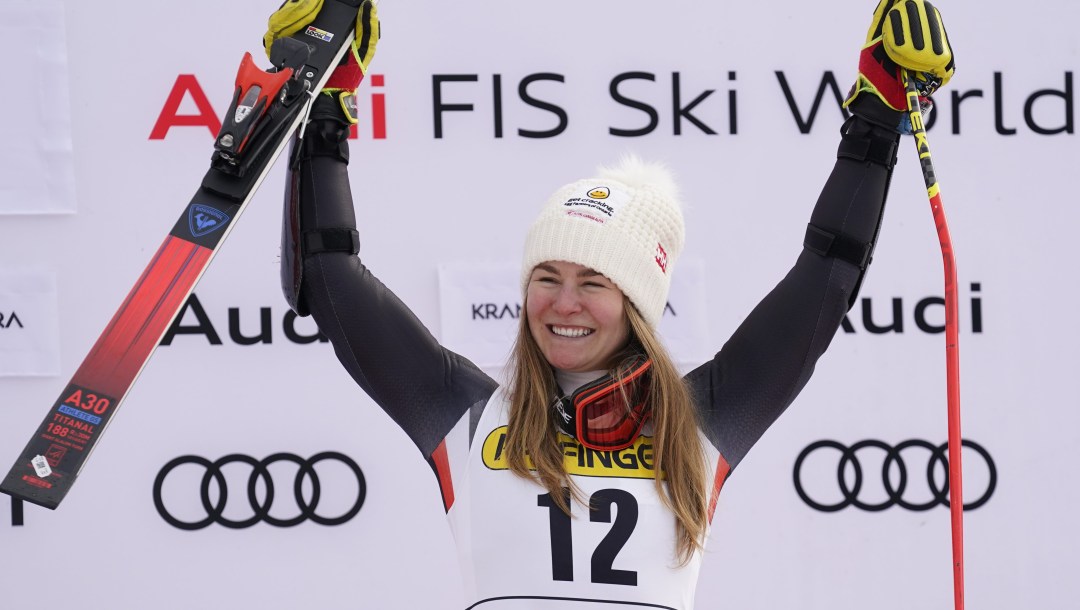 It was a memorable weekend on snow and ice for Team Canada athletes. Valérie Grenier took care of earning her first World Cup podium and victory all at once while Mirela Rahneva slid her way back onto the skeleton World Cup podium.

There was also a career-best, nail-biter of a finish for cross-country skier Antoine Cyr, a national record by ski jumper Alexandria Loutitt, plus a few other notable results you may have missed.

Take a look back at all the success:

Valérie Grenier skied her way onto a World Cup podium for the first time in her career. But not only that, she earned her spot on the very top step. The 26-year-old produced two impeccable runs in the giant slalom in Kranjska Gora, Slovenia on Saturday. Her combined time of 1:55.01 gave her the gold medal by 0.37 of a second over runner-up Marta Bassino of Italy.

Grenier returned to the slopes on Sunday to finish sixth in that second women’s giant slalom of the weekend in Slovenia. She posted a two-run combined time of 1:54.27 after being ranked third following the first run.

Skeleton: Silver for Rahneva’s second podium of the season

Mirela Rahneva slid to the silver medal in women’s skeleton at the IBSF World Cup in Winterberg, Germany on Friday. The two-time Olympian was the fastest competitor in the first heat with her time of 58.60 seconds. She posted a second heat time of 58.64 seconds to keep herself on the podium in second position.

This marks her second podium of the World Cup season. Back in December, Rahneva won gold at the IBSF World Cup stop in Park City, Utah.

It was another successful weekend for Alexandria Loutitt at the FIS Ski Jumping World Cup in Sapporo, Japan. On Saturday, she celebrated her 19th birthday with a 10th place finish in the women’s large hill event. She did even better on Sunday, flying a Canadian record 135.5 metres en route to placing eighth in another large hill event.

Loutitt has been competing well since returning from injury. In her first World Cup competition of the season on December 28, she finished a career-best fourth in a normal hill event and matched that result in another normal hill event on January 1.

The last stop of the Tour de Ski was a memorable one for Antoine Cyr as he posted career-best results on back-to-back days. On Friday, he finished sixth in the classic sprint in Val di Fiemme, Italy after making it to the final of a World Cup sprint for the first time. Cyr had placed 17th in qualification but won his quarterfinal heat before placing second in his semifinal to get into the six-man final.

On Saturday, Cyr showed his skills as an endurance racer, placing fourth in the 15km classic mass start. He missed standing on a World Cup podium for the first time by just a tenth of a second after completing the six laps of the challenging course in 40:00.05.

“I skied a pretty perfect race and did everything I could. This is a big confidence boost for the rest of the season which is still young,” said Cyr, who ended up 16th overall in the Tour de Ski, a seven-stage race within the World Cup circuit.

On the women’s side, Katherine Stewart-Jones skied into the top-10 for the first time in her World Cup career. The 27-year-old battled up and down the demanding hills of the Val di Fiemme track to post a time of 45:02.90 in the women’s 15km mass start classic on Saturday.

The first IBSF World Cup stop of 2023 was at the tricky track in Winterberg, Germany. Cynthia Appiah (2:00.13) and Bianca Ribi (2:00.14) finished eighth and ninth, respectively, in the women’s monobob. Appiah then teamed up with Leah Walkeden to finish ninth in the two-woman event (1:55.41) but said she was better able to execute than she had in the monobob. Ribi and Niamh Naughey were 12th in the two-woman.

After placing 11th in the two-man with brakeman Shaquille Murray-Lawrence, Taylor Austin piloted his four-man sled (which also included Davidson de Souza and Cyrus Gray) to a ninth place finish (1:50.34) on Sunday.

The Canadian Track Championships took place at the National Cycling Centre in Milton, Ontario this weekend. Lauriane Genest won gold in three events, including the keirin (in which she is the reigning Olympic bronze medallist) and the sprint (in which she edged out Olympic champion Kelsey Mitchell by the smallest of margins). Genest was also a member of squad that won the team sprint.