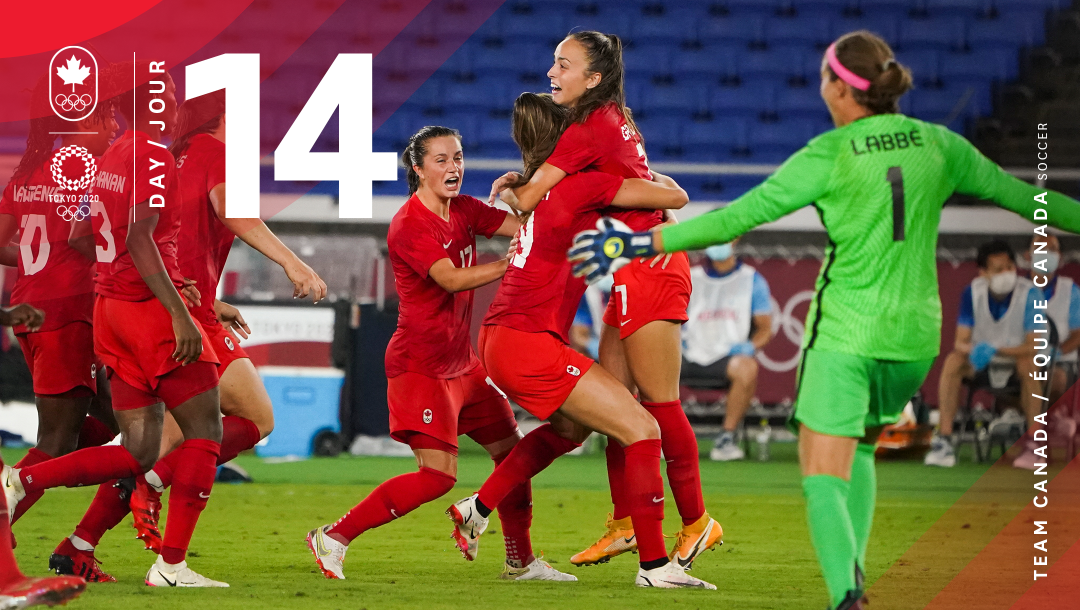 In a thrilling, nail-biting gold-medal final against Sweden, Canada prevailed 3-2 on penalty kicks after the match ended 1-1. Sweden scored first during the match, but Canada equalized in the second half after captain Christine Sinclair earned a penalty kick and Jessie Fleming converted it, just like in the semifinal against the USA.

The gold is Canada’s third straight Olympic medal in women’s soccer, after back-to-back bronze medals at London 2012 and Rio 2016.

Evan Dunfee and Mathieu Bilodeau got the day started in the men’s 50km race walk, racing through the streets in Sapporo. Coming into the event as the reigning world bronze medallist, Dunfee fought his way onto the podium after a late charge in the last 3km. Finishing in a time of 3:50:59, he upgraded his fourth at Rio 2016 to earn the bronze medal, Canada’s first ever in the 50km race walk. Bilodeau placed 45th after being unable to finish the race in Rio.

Back in Tokyo for the evening sesson, Mohammed Ahmed raced in the men’s 5000m, leaving it all on the track as he grinded onto the podium, winning the silver medal in a time of 12:68.51. Joined by Justyn Knight in the 5000m final, Knight concluded his first Olympic Games in seventh place with a time of 13:04.38.

Gabriela DeBues-Stafford lined up for the final of the women’s 1500m, coming out of the start to take the lead, for parts of the race. The runner from Toronto, Ontario, stuck with the competition and finished in a strong fifth place with a time of 3:58.93.

The Canadian men’s 4x100m relay won their second straight Olympic medal at the end of the night, edging out China to claim the Olympic bronze medal. It gives Andre De Grasse his sixth career Olympic medal and makes him a triple medallist in the sprints for the second consecutive Games.

A day after winning her historic silver medal in the C-1 200m, Laurence Vincent Lapointe was back on the water, this time in the same boat as Katie Vincent as they started competition in the women’s C-2 500m. After finishing third in their heat, they had to race in the quarterfinals. They won that race to advance into the semifinals.

Roland Varga and Connor Fitzpatrick both competed in the men’s C-1 1000m. Varga could not advance past the quarterfinals, but Fitzpatrick placed second in his to move onto the semifinals. Canada also had boats racing in the women’s K-4 500m and men’s K-4 500m heats. Based on their quarterfinal results, the women will compete next in the B final, while the men will get one more shot to qualify for the medal race in the semifinals.

Lauriane Genest and Kelsey Mitchell didn’t have much time to celebrate their finals appearance in the keirin – and Genest’s bronze medal – as they were back on the velodrome for the women’s individual sprint. In qualifying, Mitchell was the second fastest and Genest ranked fifth, setting them up well for the 1/32 finals where they both won their heats. That advanced them to the 1/16 finals, where once again, they showed what they’re capable of, to move on to the 1/8 finals on Day 15.

Following the fifth-place finish by Claudia Holzner and Jacqueline Simoneau in the duet, they joined the Canadian team that placed fifth in the Team Technical Routine with a score of 91.4992. This is the first of two phases in the team event. Canada is back in this event after not qualifying for Rio 2016.

Nathan Zsombor-Murray and Rylan Wiens competed in the preliminary round of the men’s 10m platform, looking to be among the top 18 who will advance to the semifinals. Zsombor-Murray had a great day, finishing fifth with a total score of 443.85 points. Unfortunately, Wiens came one spot shy of moving on to the next round.

In the third round of the women’s tournament, Brooke Henderson shot an even-par 71 to sit in a tie for 40th overall. Alena Sharp was two-under on the day to move up two spots to 44th, one-over par for the tournament. The leader, American Nelly Korda, is at 15-under par.

The last Canadian wrestler to step onto the mat was Jordan Steen in the men’s 97kg freestyle event. He had tough first round opponent in the reigning Olympic champion in the event, Kyle Snyder of the United States. Steen lost 12-2 and now awaits to see if Snyder advances to the final, which would place the Canadian into a repechage.