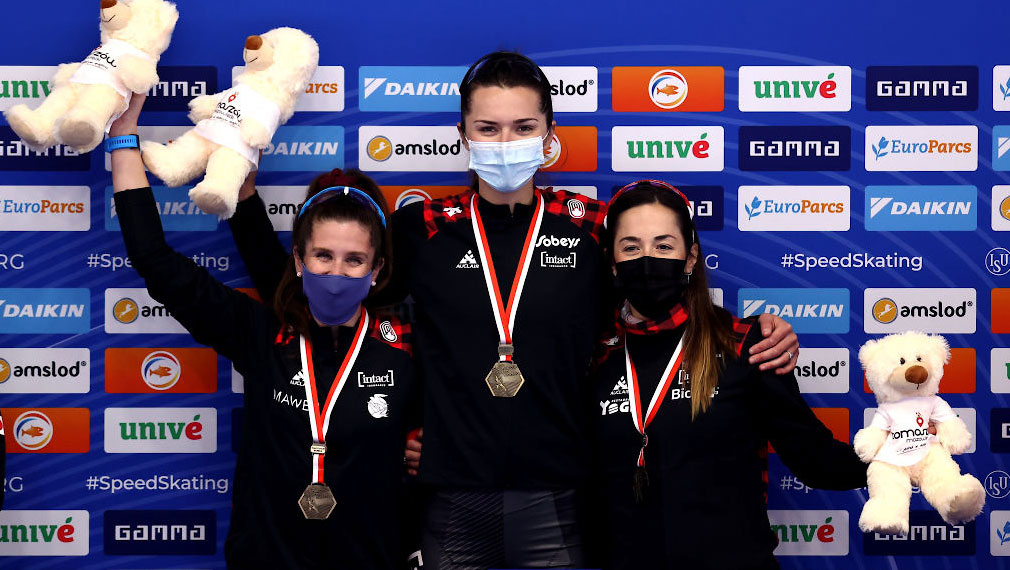 From the first World Cup competition of the season to an important on-field victory, Team Canada was busy competing across the globe. Check out some of the highlights from this weekend:

Gliding to the podium (times seven) 🤩

During the opening World Cup weekend of the long track speed skating season, Team Canada athletes raced to seven medals in Poland. The trio of Ivanie Blondin, Isabelle Weidemann, and Valérie Maltais won gold in the women’s team pursuit. Blondin also picked up a silver in mass start while Weidemann won her own silver in the 3000m.

On the men’s side, Laurent Dubreuil won a silver and a bronze medal in the two men’s 500m races. Ted-Jan Bloemen captured silver in the 5000m before finishing off the weekend with another silver alongside Connor Howe and Jordan Belchos in the men’s team pursuit. The ISU World Cup circuit continues next weekend in Norway.

Another win on the road to World Cup qualification 😤

Under the chilly Edmonton sky on Friday night, the men’s senior national soccer team defeated Costa Rica 1-0. The only goal of the match was scored by Jonathan David in the 57th minute. Canada is currently third in the Concacaf World Cup Qualifiers standings. At the end of this round of matches in March 2022, the top three teams will qualify automatically for the 2022 FIFA World Cup.

READ: Canada’s road to the FIFA World Cup is heating up

Team Canada hits the field again in Edmonton on Tuesday night against Mexico at 9:05 p.m. ET. While he was back in his hometown, Alphonso Davies finally picked up the Lou Marsh Trophy he earned in 2020.

In preparation for Beijing 2022, the women’s national hockey team faced off against Finland for a three-game exhibition series. Team Canada came out on top in all three games, winning 4-2, 8-0 and 5-1.

The team will be back in action on November 21 to take on Team USA in the next game of the Rivalry Series.

Trevor Philp and Erik Read went head-to-head during the parallel event in Lech/Zuers, Austria. Instead of racing against the clock, the Canadians raced other competitors down the slopes. Philp finished in fifth while Read was seventh in the only parallel event on the FIS World Cup circuit.

An upgrade from bronze to silver 🥈

Derek Drouin captivated the hearts of Canada as our lone athletics medallist at London 2012. Nine years later, his bronze medal has been upgraded to a silver medal. The initial gold medallist was retroactively disqualified for a doping infraction and on Friday, the IOC confirmed the modified results that saw Drouin bumped up a spot, along with the two men he had tied with.

Laurence Fournier Beaudry and Nikolaj Sørensen skated their way to a silver medal at the ISU Challenger Series Cup of Austria on Sunday. They landed on the podium with a season’s best score of 194.67, behind the Italian pair of Charlene Guignard and Marco Fabbri (208.88 points) and ahead of Olivia Smart and Adrian Diaz of Spain (189.88 points).

Their training mates from the Ice Academy of Montreal, Marjorie Lajoie and Zachary Lagha, were competing at NHK Trophy, the fourth stop on the ISU Grand Prix series. The duo finished fifth in the ice dance event with 187.38 points, less than a point out of fourth.

On Monday, Kim St-Pierre and Jarome Iginla will be officially inducted into the Hockey Hall of Fame. St-Pierre is a three-time Olympic champion, winning gold in 2002, 2006 and 2010. The goaltender appeared in nine IIHF World Championships, winning a medal every time — five gold and four silver. She is the first female goalie to be inducted into the the Hockey Hall of Fame.

Iginla is a three-time Olympian and two-time Olympic gold medallist. At Vancouver 2010, he recorded five goals and two assists, but none more important than the feed to Sidney Crosby that led to the “Golden Goal” overtime winner against the United States.

After a head-to-head match with teammate and friend Denis Shapovalov at the Stockholm Open, Félix Auger-Aliassime has a new career-high ranking of 10.

Shapovalov won the Stockholm Open last year, his first career ATP title. At this year’s tournament he was unable to defend his title, falling to American Tommy Paul in three sets of 4-6, 6-2, 6-4.