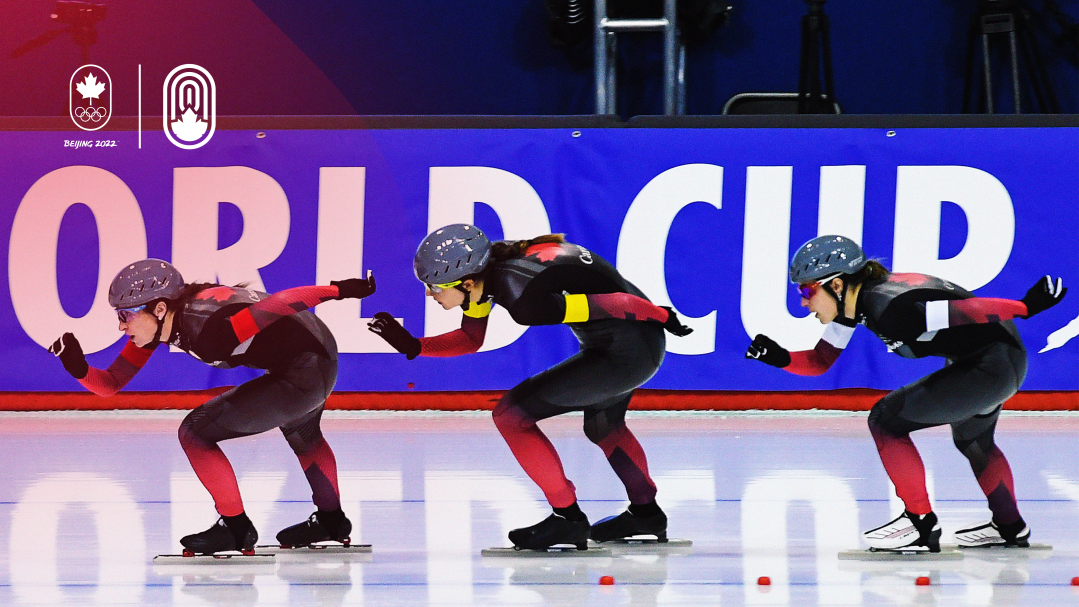 Canada will have a formidable team of eight men and eight women competing in long track speed skating at Beijing 2022.

Four years ago at PyeongChang 2018, Ted-Jan Bloemen was the only Canadian to win a medal on the big oval when he claimed 5000m silver followed by 10,000m gold for Canada’s first Olympic medals in the men’s long distance events in 86 years. He has kept the podium performances going since then, highlighted by 5000m gold and 10,000m silver at the 2020 World Single Distances Championships.

At the opposite end, Canada’s star of the sprints is Laurent Dubreuil, who won the 500m world title this past spring and followed up with podium finishes in all eight World Cup races over the distance this fall. Two of those were gold medals, including one in Calgary where he smashed the Canadian record that had stood since 2007. Dubreuil also qualified in the 1000m, in which he won bronze at the last two world championships. Like Bloemen, Beijing will be his second Olympic appearance.

Blondin and Weidemann will be ones to watch in their individual events as well. Blondin is a two-time world champion and three-time world silver medallist in the mass start. Qualified in five events, she’ll have the busiest schedule of any Canadian speed skater in Beijing, which will be her third Olympic Games. She’s also won World Cup medals in the 1500m, 3000m, and 5000m over the course of her career.

Weidemann heads to her second Games as the top-ranked woman in the World Cup long distance standings. She won silver in two of the three 3000m races held this fall and a silver in the lone 5000m race. She missed the 5000m podium by one spot at the 2021 World Single Distances Championships.

This will mark the fourth Olympic appearance for Maltais, but her first in long track after making the switch from short track in the summer of 2018. She won silver as a member of the short track relay team at Sochi 2014 and her skill at pack-style racing has helped her adjust rather quickly to the demands of the team pursuit.

The men’s team pursuit crew also plan to challenge for the podium, with Bloemen joined most frequently by Jordan Belchos and Connor Howe in recent times. They won silver at the 2021 World Championships and reached the podium in two of the three World Cup races this fall.

As a middle distance racer, Howe has been making some noise on his own this season. He won 1500m silver in Calgary in December for his first career individual World Cup medal. Now he’s set to make his first Olympic appearance.

Since making his Olympic debut in PyeongChang, Belchos’ greatest individual success has come in the mass start, in which he won silver at the 2020 World Championships. He was joined on that podium by teammate Antoine Gélinas-Beaulieu who captured bronze. Both men will be on the start line in Beijing. For his first Olympic Games, Gélinas-Beaulieu also qualified in the 1000m.

It was at the 2020 Worlds that Graeme Fish burst onto the international stage, winning the 10,000m world title while breaking the world record in the event. He unfortunately didn’t get a lot of opportunities to race at the fall World Cups after testing positive for COVID-19.

Rounding out the men’s team are Tyson Langelaar who will make his Olympic debut in the 1500m and as a member of the team pursuit and Gilmore Junio who is headed to his third straight Olympic Games in the 500m.

Two veterans and a newcomer will wear the maple leaf in the women’s 500m. In a bit of surprise, 23-year-old Brooklyn McDougall won the event at the national championships in October to earn her first fulltime spot on the World Cup team. Joining her in the shortest event in Beijing will be two-time Olympian Marsha Hudey and 2018 Olympian Heather McLean.

The women’s squad will be filled out by a couple more first-timers, Maddison Pearman and Alexa Scott. Both are entered in the 1000m. Pearman will also get the nod in the 1500m while Scott is a fourth athlete for the team pursuit, which has multiple rounds of competition in its Olympic format.

Canada has won 37 Olympic medals all time in long track speed skating, more than in any other sport at the Winter Games.

With seven events each for men and women, long track speed skating at Beijing 2022 will take place over the duration of the Games, with competition at the National Speed Skating Oval – or Ice Ribbon –  almost every day (February 5-8, 10-13, 15, 17-19).