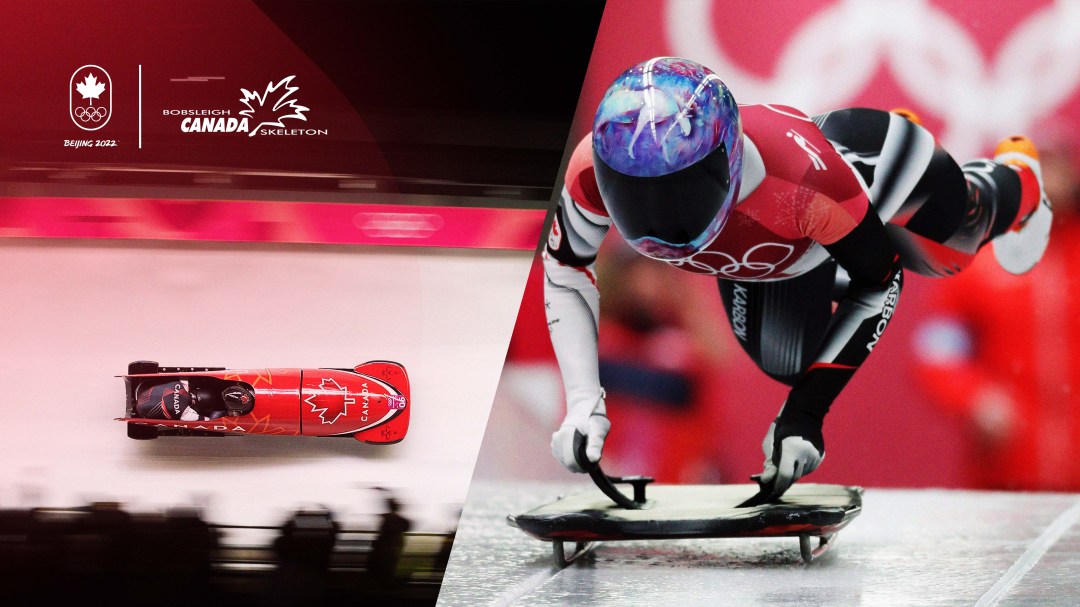 Team Canada will have a full contingent of bobsledders along with three strong skeleton athletes racing down the ice track at Beijing 2022.

Canada qualified the maximum number of sleds in the four Olympic bobsleigh events, joining Germany as the only country to do so.

The men’s team has two veteran pilots leading the way in Justin Kripps and Christopher Spring. Both are headed to their third Olympic Games at the helm of two-man and four-man crews. Also sitting in the driver’s seat of his own two-man and four-man sleds will be newcomer Taylor Austin.

Canada will also have three sleds in the two-woman event. Christine de Bruin will be driving one, while her brakewoman from PyeongChang 2018, Melissa Lotholz, will be at the front of another, having learned how to drive since her first Olympic appearance. One more recent convert to the pilot position, Cynthia Appiah, will make her official Olympic debut after being an alternate brakewoman four years ago.

The women’s skeleton team will be formed by returning Olympians Jane Channell and Mirela Rahneva while Blake Enzie is set to make his Olympic debut in the men’s skeleton event.

Kripps heads to Beijing as the co-reigning Olympic champion in the two-man. He recently finished the IBSF World Cup season as the number two pilot in the standings of both the two-man and four-man events, behind only German Francesco Friedrich, who he tied for two-man gold in PyeongChang.

Kripps earned four World Cup podiums in the two-man over the last few months, all with Cam Stones on the brakes. Kripps produced three podiums in the four-man, in which he and Stones were joined by Ryan Sommer and Ben Coakwell. Those three crewmen will be part of Team Kripps in Beijing as Stones and Coakwell are back for their second Olympic Games.

Team Spring will include Mike Evelyn, Sam Giguere and Cody Sorensen. A former university hockey player, Evelyn was recruited to bobsleigh via RBC Training Ground in 2018. He pushed Spring to two fourth-place finishes in the two-man this season.

Giguere is a former CFL wide receiver who was first introduced to bobsleigh in 2012. Sorensen made his Olympic debut at Sochi 2014, after which he left bobsleigh behind, only to return to the national team and the World Cup circuit this past fall.

Austin spent most of this season driving on the North American Cup circuit where he recorded podium finish after podium finish. He won nine of the 16 races and only went without a medal once. Austin made his World Cup debut at the season finale in St. Moritz. His crew includes Jay Dearborn, Chris Patrician, and Daniel Sunderland, all headed to their first Olympic Games.

De Bruin was the fourth-ranked pilot in the two-woman World Cup standings this season after winning four bronze medals. She welcomed Kristen Bujnowski back into her sled after her longtime brakewoman took last season off due to injury. The pair had won back-to-back bronze medals at the 2019 and 2020 World Championships.

Appiah and Lotholz both just finished their first full World Cup season as pilots and they each had the same best result in the two-woman event. Lotholz finished seventh in Altenberg with her brakewoman, Sara Villani, while Appiah was seventh at the last race in St. Moritz with Dawn Richardson Wilson.

New to the Olympic bobsleigh program this year is the women’s monobob. Appiah and de Bruin finished the season ranked third and fourth, respectively, in the overall standings. Appiah was very consistent as she stood on four World Cup podiums and never finished lower than fifth in the event. She also captured a bronze medal at the Olympic test event. De Bruin earned two monobob victories this season to go with a couple of fourth-place finishes, including one at the test event.

Rahneva made a triumphant return to the skeleton World Cup circuit this season, winning two bronze medals to bring her career podium total to 11. She sat out all of last season to recover from a neck injury.

Channell competed in just one World Cup race last season but made it count as she won the bronze medal in Kõnigssee. This season, she posted two top-seven placements.

Enzie is a fresh face on the senior scene, having competed at the junior world championships in 2019 and 2020. He made his World Cup debut this season, getting into three races late, after spending most of his time in the Intercontinental Cup circuit.

Canada has won nine Olympic medals in bobsleigh and four in skeleton.

Both sports will take place at the Yanqing Sliding Centre. The men’s and women’s skeleton events will run February 10-12 before bobsleigh takes over February 13-15 and 18-20.