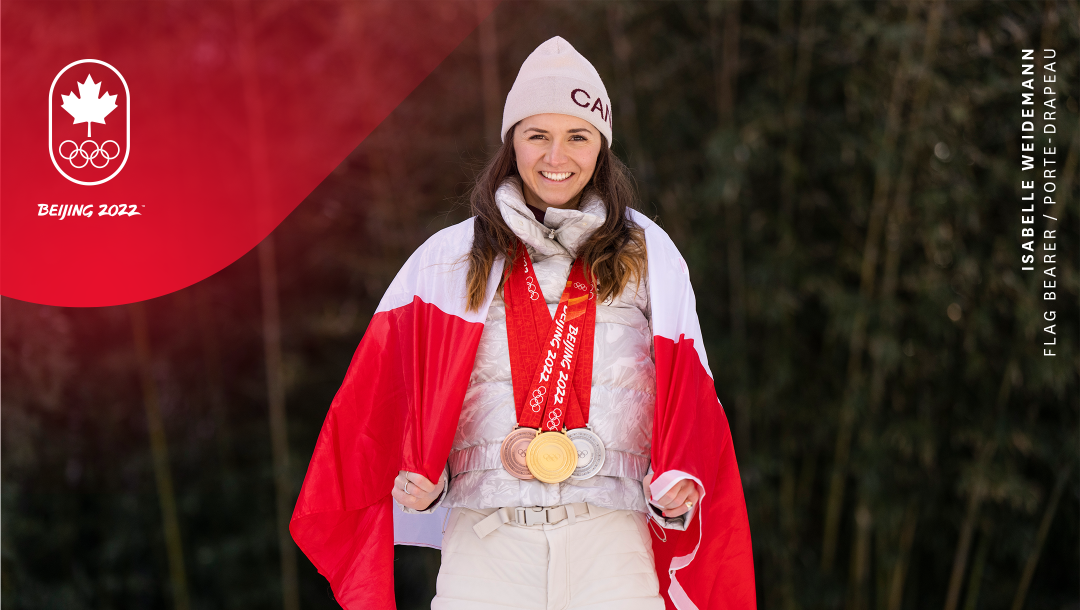 The woman who won Team Canada’s first medal of Beijing 2022 will carry Canada’s colours into the Closing Ceremony.

“It’s such an honour to be carrying the Canadian flag in the Closing Ceremony. It’s just been such a crazy end to such an unbelievable week here at the Olympics. I’m just so, so honoured,” said Weidemann.

The Ottawa-born, Calgary-based athlete – who was inspired by Canadian greats such as Cindy Klassen, Kristina Groves and Clara Hughes as she grew up watching their speed skating performances at Turin 2006 and Vancouver 2010 – is now a role model in her own right.

Weidemann stood on each step of the podium at Beijing 2022, going three-for-three in her events during her second Olympic appearance.

Her success – and Team Canada’s – started on Day 1 when she claimed bronze in the women’s 3000m at the Ice Ribbon. Six days later, she added a silver medal in the 5000m. Those were the first Olympic long track speed skating medals won by a Canadian woman in 12 years.

On Day 11, Weidemann reached the pinnacle by winning gold in the team pursuit alongside Ivanie Blondin and Valérie Maltais. The trio – who had gone undefeated in three fall World Cup races – had to defeat two accomplished teams en route to the gold medal. In the semifinals, they outpaced the world champions from the Netherlands. In the final, they set an Olympic record in their head-to-head race against the reigning Olympic champions from Japan.

READ: Taking it one step at a time, Canada skates to Olympic team pursuit gold

That made Weidemann Canada’s first triple medallist of Beijing 2022. She was later joined by short track speed skater Steven Dubois, who also won a medal of each colour, including a gold in the 5000m relay that boosted teammate Charles Hamelin into a tie for Canada’s most decorated Winter Olympian with his sixth career medal.

Double medallists on Team Canada include snowboarder Max Parrot, who won slopestyle gold and big air bronze, just a few years after battling cancer, as well as snowboard cross racers Eliot Grondin and Meryeta O’Dine, who memorably got to the bottom of the course after being landed on by a competitor.

A huge part of the Olympic experience is being part of the larger Team Canada, made up of 215 athletes at Beijing 2022. Weidemann acknowledged that in accepting the honour of being their flag bearer at the Closing Ceremony.

“I’m so proud to be a member of this team. I don’t know how many times this week I’ve shared in other people’s joy and shared in sadness as well. It’s been so incredible to just watch everybody do their best. I love the Olympic Games. I love being part of the Canadian team, it’s just so special,” she said.

While our athletes have chased Olympic glory in one form or another over the last two weeks, they have done so in unusual circumstances, with the pandemic preventing their biggest cheerleaders from being there in person. But Weidemann made it clear that the athletes on Team Canada know that fans have been watching from across the ocean.

“First off, I want to say thank you for cheering. We’re so far apart from support back home, from family, from friends. Everybody cheering across the country, we felt their support over here and I’m so proud to contribute to that inspiration.

“I’m so proud to be part of the team that has helped bring happiness back to Canada.”