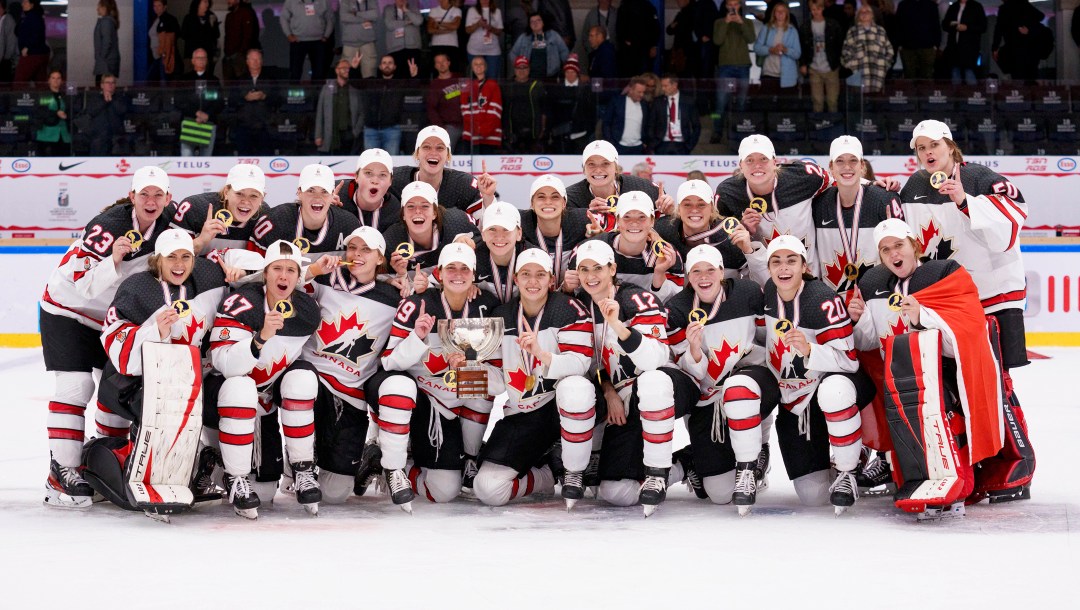 Team Canada is on top of the world once again in women’s hockey, winning a 12th gold medal all-time at the world championships with a close victory over the archrival Americans.

But the world champs weren’t the only Canadians who had a successful weekend as a reunited quartet continued their winning ways in 3×3 basketball.

Here’s a look at what else you may have missed.

Brianne Jenner played the hero as she scored a pair of goals to lead Canada to a 2-1 victory. Goaltender Ann-Renée Desbiens made 20 saves and kept a frenzied American offence out of the back of the net late in the third period

Canada reached the playoff round after going 3-1 in preliminary play. The team’s only loss was at the hands of the rival Americans by a 5-2 score. Canada would go on to beat Sweden 3-0 in the quarterfinals and dominated Switzerland 8-1 in the semifinals.

This is Canada’s 12th gold medal all-time at the women’s worlds. It follows the gold medal won at last year’s worlds as well as the Olympic gold won at Beijing 2022.

Basketball: Another 3×3 title for Canada

Team Canada claimed a third FIBA ​​3×3 Women’s Series title of the season this weekend in Montreal.

The team made up of Katherine Plouffe, Michelle Plouffe, Paige Crozon and Kacie Bosch finished with a perfect 5-0 record, culminating in a thrilling 19-18 win in the final against France’s U24 squad. Michelle Plouffe is now the top-ranked 3×3 player in the world. Canada is the only team to win three Women’s Series stops this season.

The FIBA ​​3×3 Women’s Series Final will take place September 17-18 in Constanta, Romania. Canada will be a top contender to win it all as they bring with them the best winning percentage in the competition.

Aaron Brown ran to 200m bronze in the Brussels leg of the Diamond League series.

Brown clocked in at 20.22 seconds to finish behind gold medallist American Erriyon Knighton (20.07s) and Alexander Ogando of the Dominican Republic (20.18s).

Brown will compete at the Diamond League Final that takes place Wednesday and Thursday in Zurich, Switzerland. Other Canadians qualified include Marco Arop, Django Lovett, and Sarah Mitton.

Skylar Park had her career-best performance in a Grand Prix event as she won 57kg silver in Paris. It was the first time Park had ever advanced to the final at a Grand Prix. She had earned four career bronze medals in Grand Prix events, including one earlier this summer in Rome.

Melissa Humana-Paredes and Brandie Wilkerson finished as the runners-up at the Chicago Open, an AVP Gold Series event. They lost the final 2-1 to Americans Taryn Klot and Kristen Nuss.

It was their first professional tournament together after Humana-Paredes and Sarah Pavan announced last week that they would be ending their five-year partnership. Humana-Paredes and Wilkerson know each other from their days playing together at York University. Wilkerson has played with Sophie Bukovec in FIVB events this season, highlighted by their silver medal at the world championships. No announcements have been made about new potential permanent partnerships.

Soccer: Canada looks comfortable Down Under

Team Canada’s preparation for the 2023 FIFA Women’s World Cup is on course. They defeated Australia — who will co-host the next World Cup with New Zealand — in a pair of friendlies.

First was a 1-0 win on Saturday in Brisbane. Adriana Leon scored the lone goal for Canada — a screamer from just outside the box in the 11th minute. Goalkeeper Kailen Sheridan gave her squad a stellar performance as she stopped seven shots on target from the Australian side.

On Monday, Canada earned a 2-1 victory in Sydney, thanks again to Leon. After The Matildas went up 1-0 just three minutes into the match, Leon got the tying goal and go-ahead goal in the second half.

Also of note, Christine Sinclair moved into second place on the all-time international appearances list. She has played in 317 games for Canada, leaving her just 37 caps shy of American Kristine Lilly, currently the most capped player in international soccer.

The last Canadians standing at the US Open are competing in doubles.

READ: Team Canada at the US Open

Gabriela Dabrowski and Mexican partner Giuliana Olmos are in the women’s doubles quarterfinals where they will face the third seeds from the Czech Republic on Monday.

Leylah Fernandez will play with her American partner Jack Sock in the mixed doubles quarterfinals against the fourth seeds from Australia.