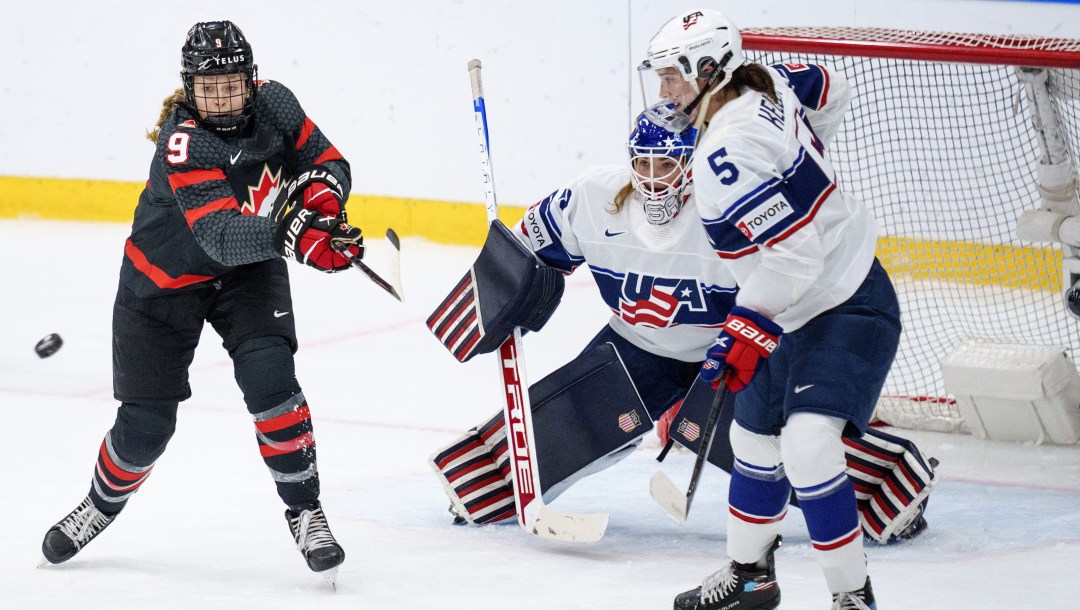 In the latest chapter of women’s hockey’s greatest rivalry, the United States defeated Canada 5-2 on Tuesday to finish atop Group A at the 2022 IIHF World Women’s Championship in Denmark.

Canada led 2-0 after the first period but the Americans chipped away at the lead, scoring five unanswered goals in the victory. The United States, who fell to Canada in both the gold medal game of Beijing 2022 and last year’s world championship final, scored twice in the second period and then took the lead in the third.

Sarah Fillier and Ella Shelton scored for Canada, who finish preliminary round play with a 3-1 record. Emerance Maschmeyer, making her second straight start, made 29 saves in the loss.

Canada, as second-place finishers in Group A, will face Sweden in Thursday’s quarterfinals at 2 p.m. EST. The United States, meanwhile, will face Hungary.

Just 3:29 into the first period, Fillier opened the scoring to give Canada an early 1-0 lead. A Renata Fast point shot produced a rebound in front where Fillier had an open cage to score her eighth career goal against the Americans.

The United States pressed hard in the offensive zone at times throughout the first period. Maschmeyer, who faced just five shots in Canada’s 9-0 win over Japan on Sunday, was busy in net, facing 11 shots in the opening frame.

Shots were 11-2 in favour of the Americans when Kelly Pannek put an illegal hit on Sarah Nurse behind the net, sending Canada to the power play. At 18:12 and with Canada pressing, a Victoria Bach shot caused a scramble at the top of the crease where Shelton beat an out-of-position Nicole Hensley in the American goal to make it 2-0 Canada.

The United States was awarded their first power play of the game at 2:45 of the second period when Meaghan Mikkelson was called for a hook. At 4:16, a Megan Keller shot from the slot was deflected off a skate and past Maschmeyer to get the Americans on the board.

Canada nearly regained their two-goal lead near the midway mark of the frame when Jessie Eldridge redirected a shot off the post. Not long after, at 11:11, a Cayla Barnes point shot was tipped by Pannek to tie the match up at 2-2.

The Americans took their first lead of the game at 3:14 of the third period when Lacey Eden beat Maschmeyer over the shoulder with a shot from the circle.

Canada went to their second power play at 6:09 when Kendall Coyne Schofield put a board on Laura Stacey. The Canadians produced some strong pressure in the offensive zone but they could not net an equalizer.

Coyne gave the Americans a 4-2 advantage at 13:28 when she redirect a shot past Maschmeyer.

After killing off a Fast penalty, the Canadians pulled Maschmeyer with nearly two-minutes remaining. Hilary Knight scored into an empty net with 54 seconds left to make it a 5-2 final.

Following quarterfinal play on Thursday, semifinal games will be held on Saturday while Sunday will feature the gold and bronze medal contests. Canada is looking to win a second straight IIHF World Women’s Championship after claiming gold at last year’s event in Calgary.

Eight different players scored in Canada’s 9-0 win over Japan on Sunday at the 2022 IIHF World Women’s Championship in Denmark.

Marie-Philip Poulin scored twice while Victoria Bach, Emma Maltais, Blayre Turnbull, Ella Shelton, Jamie Lee Rattray, Sarah Potomak and Sarah Fillier all added singles in what was the first meeting between the two countries since 2000. Bach, Fillier, Erin Ambrose and Jocelyne Larocque each had two assists. Goaltender Emerance Maschmeyer, playing in her first game of the tournament, only faced five shots in the shutout win.

Canada led 3-0 after the first period on Sunday. Bach opened the scoring on a power play just 1:25 in, making a nice toe drag at the bottom of the circle before ripping a shot past the blocker of Japan goaltender Akane Konishi.

Poulin made it 2-0 at 6:54 with another power play goal. Ambrose was in the high slot and found Poulin down low, allowing the Canadian captain to beat Konishi blocker side and double Canada’s lead.

Maltais’ goal at 15:05 made it 3-0. After a scramble near the top of the crease, the puck came loose to Meaghan Mikkelson who fired a low shot through some traffic that was deflected by Maltais and past Konishi. That was one of 24 shots Canada had in the opening frame.

Canada kept rolling in the second period. Bach sent a backhand pass through the crease to Turnbull who had an open net to give the Canadians a 4-0 advantage 2:26 into the frame.

Poulin’s second of the game made it 5-0 at 13:09. The captain sped down the wing and beat Japanese netminder Riko Kawaguchi – who replaced Konishi near the midway mark of the period – with a low shot.

Canada’s offense kept coming late in the second. At 17:19, Shelton finished off a nice passing play with Kristin O’Neill and Bach to make it 6-0. Then at 18:02, Turnbull went behind the net with the puck and found Rattray in front, giving Canada a 7-0 lead through two periods.

Potomak made it 8-0 Canada at 2:32 of the third when she put in the rebound of a Jessie Eldridge shot. Then at 10:36 on a power play, Fillier ripped a wrist shot from the circle that flew over the glove of Kawaguchi to extend Canada’s lead.

A two-goal performance from Sarah Fillier improved Canada’s record to 2-0 at the 2022 IIHF World Women’s Championship in Denmark on Saturday.

Fillier put Canada up 1-0 at 10:15 of the opening frame, firing a shot from between the circles that was deflected in front and past Swiss netminder Andrea Brändli.

Brändli was busy in the first period with Canada outshooting Switzerland 14-3. The lopsided shot total came even with the Canadians taking three minor penalties.

The Canadians continued to press offensively in the second period and were rewarded at 9:40. After a Swiss turnover, Fillier got the puck, skated to the bottom of the circle and wired a hard wrist shot over Brändli’s blocker to double Canada’s lead.

Less than two minutes later at 11:12, Victoria Bach made a nice play to keep the puck in at the blue line. Bach then fed Turnbull down low who found an open Clark in front, making it 3-0.

Canada went to the power play for the first time in the game just 39 seconds into the third period. The Canadians applied some strong offensive zone pressure but could not connect for a fourth goal.

Switzerland got on the board at 12:32. Laura Zimmermann centered the puck for Alina Marti who beat Desbiens with a one-time shot from the slot.

10 seconds after the goal, Switzerland went to the power play with Jamie Lee Rattray being called for a trip. The Swiss got the puck past Desbiens late in the advantage but a quick whistle resulted in the goal not counting.

Not long after killing off another Switzerland power play, Turnbull beat Brändli five-hole with a quick wrist shot to make it 4-1 Canada with 1:14 remaining.

Canada improved to 16-0 all-time against Switzerland with the win, which includes an 8-0 record in world championship play.

Team Canada’s quest for a golden repeat is off to a good start at the 2022 IIHF World Women’s Championship in Denmark.

Captain Marie-Philip Poulin and veteran forward Sarah Nurse each had a goal and an assist to lead Canada to a 4-1 victory over Finland at the KVIK Hockey Arena. Meaghan Mikkelson and Blayre Turnbull also scored for the defending world champions while netminder Ann-Renée Desbiens made 16 saves in the win.

Canada had a strong showing defensively in their tournament opener, killing off six Finnish power plays and stopping a penalty shot. The Canadians, who were without veteran defenseman Erin Ambrose due to a lower body injury suffered in a pre-tournament game, outshot Finland 43-17 despite all the time spent shorthanded.

Canada opened the scoring with a power play goal. Finland’s Petra Nieminen received a five-minute major and game misconduct for a check from behind on Kristin O’Neill. At 7:38, Nurse redirected a Poulin shot past Finnish netminder Anni Keisala to give Canada a 1-0 advantage.

Finland tied the game at 12:07. After Desbiens stopped a point shot through a screen, Julia Liikala collected the rebound and netted her first of the tournament.

Poulin put Canada back in front at 14:51. The Canadian captain entered the zone and skated into the circle, picking her spot and wiring a perfectly placed wrist shot over the shoulder of Keisala to make it 2-1. Finland had a great opportunity to tie the game again in the final seconds after being awarded a penalty shot. Kiira Yrjänen took the shot for the Finns but was stopped by the pad of Desbiens.

Mikkelson, making her return to the international scene after recovering from a severe knee injury, scored at 10:01 of the second period to give Canada a two-goal lead. After a turnover by the Finns, the puck made its way to Ella Shelton who had her shot blocked by some bodies in front of the net. Mikkelson found the loose puck and beat Keisala, making it 3-1 for the Canadians.

Canada got into some penalty trouble late in the period but were able to kill them off. Despite the late man advantages for Finland, shots were 19-4 in favour of the Canadians in the middle frame.

Canada’s strong defensive play was on display again in the third period. Turnbull made it a 4-1 final with an empty net goal with 1:32 remaining. 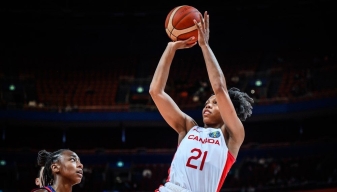