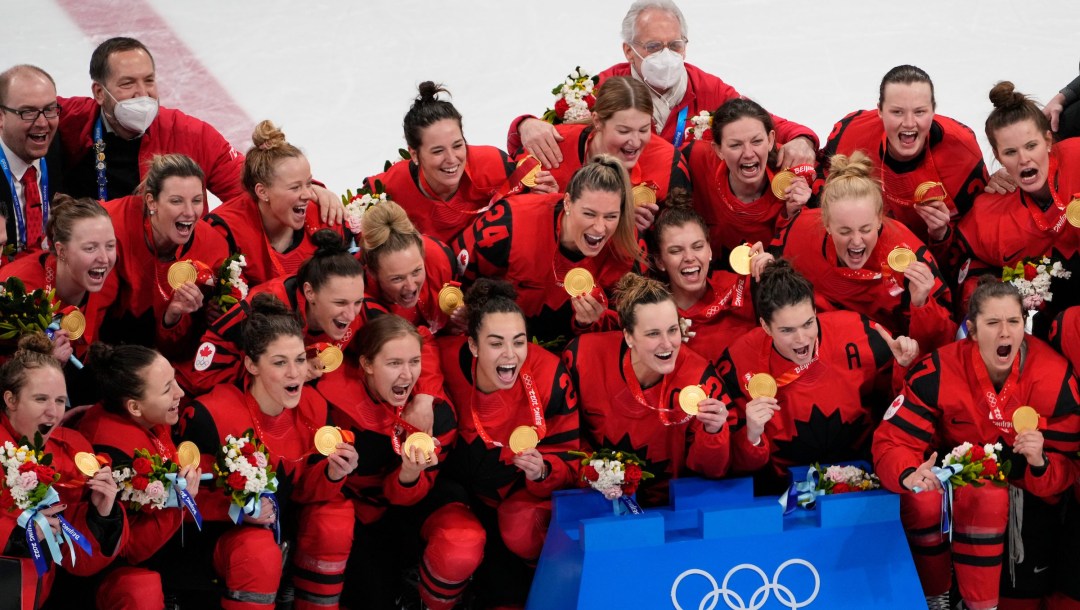 Eighteen players who captured Olympic gold at Beijing 2022 will be wearing the maple leaf once again at the 2022 IIHF World Women’s Championship in Denmark.

Team Canada begins the women’s hockey worlds on Thursday, August 25 against Finland as they start their defence of the gold they won at the 2021 event in Calgary. Prior to last year, Canada hadn’t won gold at a women’s world hockey championship since 2012.

Canada brings a deep and experienced roster into this year’s tournament as they look to win back-to-back world titles. Up front, Olympic standouts Marie-Philip Poulin, Sarah Nurse and Brianne Jenner will all sport the red and white once again. All three were named to the tournament all-star team at Beijing 2022.

Poulin, often referred to as “Captain Clutch,” scored twice in Canada’s 3-2 win over the United States in the gold medal game in Beijing. The 31-year-old has an impressive resume of big goals and is the only player – female or male – to score in four Olympic gold medal games. Poulin also netted the overtime winner in the gold medal game of last year’s IIHF World Women’s Championship, which was also a 3-2 victory over the rival Americans.

Canada’s forward group also includes some up-and-coming stars on the international scene, most notably 22-year-old Sarah Fillier, who had eight goals in seven games during her Olympic debut, ranking her second in tournament goal scoring. Only one player — Jessie Eldridge — will be competing at her first world championship. Sarah Potomak will be participating in her first world championship since 2017 when she was just 19.

Erin Ambrose, Ashton Bell, Renata Fast, Ella Shelton and Micah Zandee-Hart, all of whom were part of Canada’s squad in Beijing, round out the defensive core.

All three of Canada’s goaltenders from Beijing — Ann-Renée Desbiens, Emerance Maschmeyer and Kristen Campbell — will be part of the world championship team. The trio also helped Canada win gold at last year’s worlds. Desbiens posted a 5-0 record in Beijing to go along with a solid 1.80 goals against average and a .940 save percentage.

“It is unusual to play in a world championship and an Olympics in a single year, but this opportunity allows us to evaluate ourselves against the best in the world as we start our new four-year Olympic cycle,” said director of hockey operations Gina Kingsbury. “We are fortunate to have familiarity among our coaching staff and players who know what it takes to win. We had an extremely competitive camp and we believe we have assembled an experienced team that will give us the best chance to compete once again for a gold medal.”

Canada will play in the top-tier Group A, joining Finland, Japan, Switzerland and the United States. Canada and the United States have met in every gold medal game of the women’s worlds except in 2019, when the Americans defeated Finland in the championship contest. Finland has been on the podium in four of the past five tournaments.

Group B will consist of Czechia, Denmark, Germany, Hungary and Sweden. All five teams in Group A will advance to the playoff round along with the top three teams from Group B.

Following their tournament opener against Finland on Thursday, Canada will play Switzerland (August 27), Japan (August 28) and the United States (August 30) in the preliminary round. All of Canada’s games will be played at the KVIK Hockey Arena in Herning, Denmark. The quarterfinals take place September 1 followed by the semifinals on September 3 and the gold and bronze medal games on September 4.

All of Team Canada’s games will be broadcast by TSN.