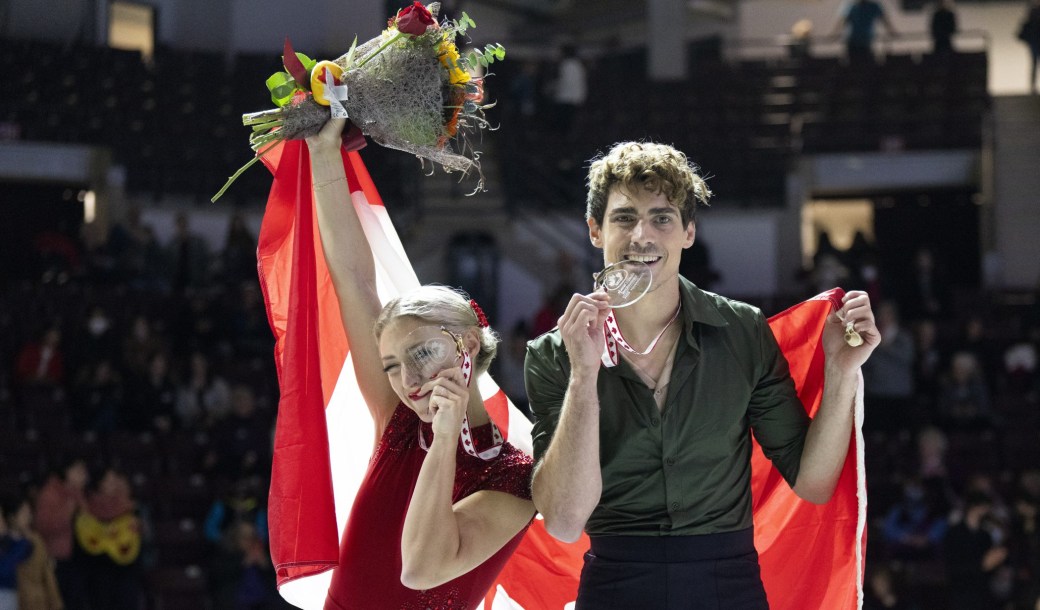 There’s nothing better than watching Canadians win at home!

Speed skaters took to the ice in Montreal for the first stop of the ISU World Cup Short Track Speed Skating season where they won six medals, including two gold.

In Toronto, there were medals galore (21 of them!) won by Canadians at the FINA Swimming World Cup, including five gold.

Canadian ice dancers secured two spots on the podium at Skate Canada International on Saturday. Piper Gilles and Paul Poirier won gold while Marjorie Lajoie and Zachary Lagha claimed bronze. Gilles and Poirier earned 128.47 points after their passionate debut of their free dance to music from the musical Evita and scored 215.70 overall.

READ: Piper & Paul and Evita: A dance a decade in the making

Earning their first career Grand Prix medal, Lajoie and Lagha jumped from fourth after the rhythm dance with their lyrical free dance that earned 119.55 points for an overall total of 195.49.

There were also some near-podium results as Keegan Messing finished fourth in the men’s event while Brooke McIntosh and Benjamin Mimar place fourth in pairs.

No one in the world is playing tennis as well as Félix Auger-Aliassime right now. The 22-year-old Canadian won his 13th match in a row on Sunday to capture the trophy at the Swiss Indoors Basel, an ATP 500 event. This is his third consecutive ATP singles title in as many weeks.

He defeated Holger Rune of Denmark 6-3, 7-5 in Sunday’s final after taking down world No. 1 Carlos Alcaraz in the semifinals. Like Rune, Alcaraz was no match for Auger-Aliassime who wasn’t broken once throughout his five tournament matches. He is once again ranked eighth in the world, matching his career high.

Over at the Vienna Open, Denis Shapovalov fell short of winning his first title of the year. In the final of that ATP 500 event, he started strong but couldn’t hold off Daniil Medvedev. The 23-year-old Canadian fell in three sets of 6-4, 3-6, 2-6.

Team Canada started the ISU World Cup Short Track Speed Skating season by capturing six medals in Montreal. Steven Dubois skated to gold in the 500m and silver in the 1500m. Pascal Dion claimed gold in the second 1000m final. He then joined forces with Dubois, Maxime Laoun and Jordan Pierre-Gilles to win bronze in the men’s 5000m relay.

Canadian swimmers reached new levels of success at the 2022 FINA Swimming World Cup in Toronto. Over the weekend there were two Canadian podium sweeps. On Saturday, Margaret Mac Neil, Kylie Masse and Ingrid Wilm won gold, silver and bronze, respectively in the women’s 50m backstroke. Then on Sunday, Summer McIntosh, Sydney Pickrem and Bailey Andison did the same in the women’s 400m individual medley. McIntosh’s winning time of 4:21.49 was a world junior record.

McIntosh also won gold in the 400m freestyle in which she defeated American superstar Katie Ledecky while setting a world junior record of 3:52.80. It is the second-fastest time ever in the event. Mac Neil was also a gold medallist in the 50m and 100m butterfly events, setting a World Cup record time of 54.78 in the latter. She was the overall women’s winner for the Toronto stop of the short course (25m) circuit.

Artistic Gymnastics: En route to finals at the World Championships

Ellie Black is through to several finals at the 2022 Artistic Gymnastics World Championships in Liverpool, England. The 27-year-old Canadian qualified for the women’s individual all-round final in 11th place with her score of 54.131 in qualification. She will also compete in the eight-woman finals for vault and beam later in the week.

First up, though, will be the team event. Team Canada — composed of Black, Laurie Denommee, Denelle Pedrick, Emma Spence, and Sydney Turner — finished eighth in the qualifying round to take the last spot in Tuesday’s final.

Team Canada stood out at the Americas Triathlon Championships in Montevideo, Uruguay on Saturday. Emy Legault and Charles Paquet ran their way to a pair of bronze medals in the elite races.

Legault finished with a time of 2:02:41 in the women’s event. In the men’s event, Paquet posted a time of 1:51:27 for the bronze. Felowl Canadian Jeremy Briard finished just off the podium in fourth position. Then Legault and Paquet teamed up with Noemie Beaulieu and Brock Hoel to win silver in the mixed relay.