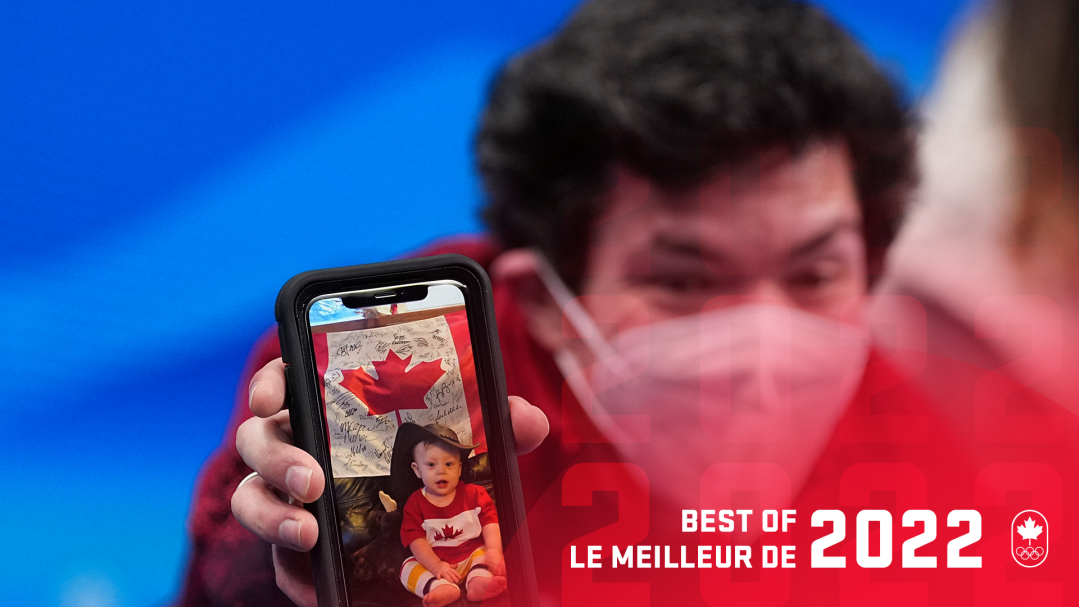 It’s not always about the medals.

While we have been (and will continue) acknowledging the many amazing athletic accomplishments we saw throughout 2022, we also want to pay tribute to some other moments that gave us the feels.

They are moments that made us truly proud to be Canadian as they each provided inspiration and admiration in their own way. We hope you feel the same.

Justine Dufour-Lapointe doesn’t give up

Picture it: a two-time Olympic medallist suddenly loses her shot at the podium when she crashes out on the moguls course. But rather than just walk away, she retrieves her pole and finishes her run, even though the score would mean nothing.

So it was for Justine Dufour-Lapointe at Beijing 2022, who through her tears gave us a master class in pride and perseverance.

“I needed to finish this Olympic dream on my two feet and make sure that each person watching tonight knows that beyond winning, beyond days like this, the most important thing is to never give up.”

It’s a lesson we can all be reminded of every day.

Cheers heard halfway across the world

It was tough on all Team Canada athletes to be so far away from their families and friends as they went after their Olympic dreams at Beijing 2022. But it was oh so fun to watch those families celebrate at all hours of the night as they watched on TV from their own homes.

Case in point: Isabelle Weidemann’s loved ones (including a few furry four-legged ones) letting it all out after she and teammates Ivanie Blondin and Valérie Maltais won gold in speed skating’s team pursuit.

Never has a flight path been watched so closely. After Keegan Messing’s departure from Vancouver was delayed because he couldn’t get the necessary negative COVID-19 test, the whole country was hoping it wouldn’t completely end his Olympic experience. You could almost hear the collective cheer when we learned he was en route to Beijing – but not without going around the entire earth.

He showed up to his first practice within minutes of getting to the Olympic Village, letting us all see what he looks like unshaven. A clean short program less than 24 hours later was the icing on the cake. As he had done in the kiss-and-cry all season, Messing showed the world who inspires him to do what he does – infant son Wyatt. Cue all the awwwws. Messing went on to become cheerleader-in-chief for his teammates, proudly waving a huge Canadian flag throughout the rest of his time in Beijing.

It was the kind of cold you could feel through photographs. The last two events of the cross-country skiing competition at Beijing 2022 were also the longest – the mass starts. But with air temperature at minus double digits and the winds whipping, the men’s race was shortened from 50km to 30km, matching the women’s distance. In that women’s race, Cendrine Browne persevered to finish 16th, the best ever Canadian Olympic free technique result in the event. What a way to ski towards retirement at the end of the season.

When pilot Cynthia Appiah was paired with brakewoman Dawn Richardson Wilson at the start of the 2021-22 season, it marked the first time that two Black Canadian women would compete together in bobsleigh. In an interesting coincidence, they are both of Ghanaian heritage. But it was the way they never gave up at Beijing 2022 that makes them especially inspiring.

After crashing late in their third run and sliding through the finish on their side, no one would have batted an eye if they had decided not to take their last trip down the track. But they were determined to finish what they had started and ended up thrilled with their top eight placement in their Olympic debuts.

Though Laurie Blouin did not win an Olympic medal in Beijing, she was certainly excited for her competitors who did. In a great show of sportsmanship, she led the charge to celebrate the podium finishers, who were all pushing progression in women’s snowboarding with the tricks they attempted. Rivals hugged and jumped on rivals as the love, camaraderie, and support among the women won out over any sourness the non-medallists might have felt.

Getting the hugs back at home

At the end of the classic Christmas movie Love Actually are scenes of people greeting each other with big hugs at Heathrow Airport. Moments like that were replicated all across Canada as Olympians arrived home from Beijing after weeks, perhaps even months away from their loved ones. Whether the Games had gone the way they always dreamed or if they were disappointed with their result, that in-person connection to family was the perfect tonic.

An eye-opening visit to Fort William

In late May, two of the ski jumpers who won a historic Olympic bronze medal at Beijing 2022 – Mackenzie Boyd-Clowes and Matthew Soukup – travelled to Fort William First Nation at the invitation of resident and ski jumping legend Steve Collins.

His hope was that the visit would inspire local Indigenous youth to fall in love with the sport the way that he had as a child and to know that they have the opportunity to dream big. Collins’ emotion was evident as he told of his mission to revive ski jumping in northern Ontario and the impact one visit from Olympic medallists can have.

After two pandemic-disrupted summers, it was so special to see Pride Parades return to their usual form across the country. We were especially proud to see so many Team Canada Olympians participate, whether they identify as members of the LGBTQI2S+ community or have chosen to be an ally.

Doing the right thing for the planet

We’ve all become more aware of the need for climate action, but one Canadian Olympian is taking on a particular challenge: becoming carbon neutral as she works towards competing at Milano Cortina 2026.

In October, aerialist Marion Thénault told us all about her goal and how she plans to follow through on her pledge to reduce her ecological footprint even as she travels and competes around the world.

Thénault isn’t the only one trying to do her part for the planet. The Canadian Olympic Committee has committed to the UN Sport for Climate Action Race to Zero Framework. That includes an interim target of reducing the organization’s carbon emissions by 50% by 2030 as a minimum and a long term target of achieving net-zero carbon emissions by 2040.

Learn more about other National Olympic Committees that have made that same commitment and what the COC has done thus far to embark on a more environmentally sustainable pathway.