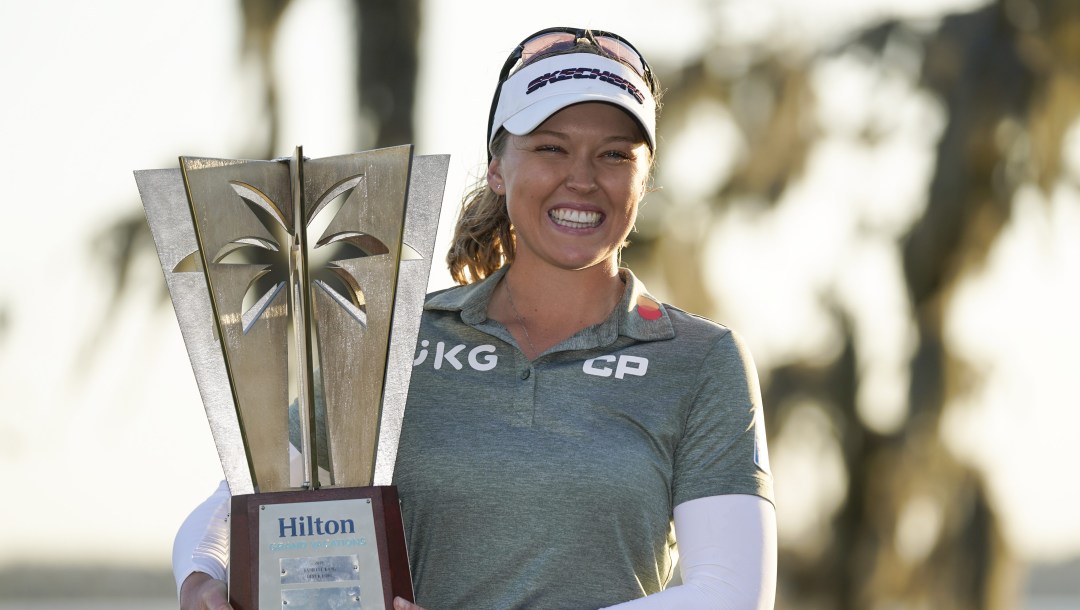 Team Canada athletes came through with some momentous victories over the weekend.

Brooke Henderson continued to grow her record for most pro golf tour titles by a Canadian. Marion Thénault soared to aerials gold to lead a flurry of freestyle skiing medals on home snow. Plus, Reece Howden sits atop the ski cross world following a double podium performance.

Brooke Henderson started off 2023 with a bang, winning the first event of the LPGA Tour season. She led through all four rounds at the Hilton Grand Vacations Tournament of Champions in Orlando, Florida — an elite tournament featuring only 29 winners from the past two seasons. Henderson finished the event at 16-under par to secure the victory by four strokes over Maja Stark of Sweden and Charley Hull of England.

After shooting 67 on Thursday, 66 on Friday, and 69 on Saturday, Henderson concluded with a two-under par round of 70 in windy and sometimes difficult conditions on Sunday. She had been the runner-up at the Tournament of Champions last year.

“It’s so exciting,” said Henderson. “I always try to win a couple times each year, so to get one right away out of the gate takes a little bit of pressure off…. It’s exciting to be in contention and even more exciting to hoist trophies.”

The 25-year-old has more pro tour titles than any other Canadian golfer, male or female. She’s held that record ever since she reached career win number nine in 2019.

After almost a month break, Reece Howden was more than ready to return to FIS World Cup ski cross competition. He started off his weekend by winning silver on Saturday. There were three Canadians in the top eight as his teammates Jared Schmidt and Kevin Drury advances to the small final and finished fifth and sixth, respectively.

On Sunday, Howden topped the podium in the second race in Idre Fjall, Sweden. That was his fifth straight World Cup medal and his second victory of the season, helping him to sit atop the men’s ski cross World Cup standings. Schmidt got into the small final for a second straight day, placing sixth.

In the women’s competition, Marielle Thompson captured bronze on Sunday, climbing the ranks after her fifth-place finish on Saturday. That was her fourth podium of the season. Sweden Sandra Naeslund claimed the gold medal — as she has done in all seven World Cup races this season.

Thompson’s teammate Tiana Gairns won Sunday’s small final to place fifth overall. On Saturday, there had been three Canadians in the small final as Thompson placed fifth, Gairns was seventh, and Hannah Schmidt came in eighth.

Marion Thénault captured gold in front of a home crowd at the FIS Freestyle Ski World Cup aerials competition in Le Relais, Quebec on Saturday. She was in great form all day, placing second in qualification before topping the field in the first round of the final. In the six-woman super final, Thénault score 96.23 points for her back triple twisting double somersault — the highest scoring jump of the day. The win vaulted Thénault into first place in the women’s World Cup aerials standings.

Flavie Aumond was the top Canadian woman on Sunday, placing seventh. Canada had three men finish in the top-five over the weekend. On Saturday, Lewis Irving placed fifth. On Sunday, Alexandre Duchaine came fourth with Miha Fontaine just behind in fifth. Those were career-best results for both men.

The home snow success carried over to Calgary where four Canadians reached the podium in ski halfpipe.

Saturday produced similar results as Karker claimed another silver with 85.50 points as Gu dominated again for the gold medal. Glennie and Fraser placed sixth and seventh, respectively, in that final.

Brendan Mackay and Simon d’Artois shared the podium in Thursday’s men’s event. Mackay won silver, as his score of 94.50 was pushed out of the top spot by Finland’s Jon Sallinen on his final run. It was bronze for d’Artois, who delivered a clutch third run that scored him 93.00 to secure his spot on the podium. Noah Bowman and Dylan Marineau also reached the final, placing eighth and 10th, respectively.

On Saturday, after missing on his first two attempts in the final, Bowman laid down a solid third run to score 90.50 points to earn the bronze medal. In doing so, he bumped d’Artois down to fourth place, who missed his second medal of the weekend by one point. Americans Alex Ferreira (94.50) and Birk Irving (93.00) won gold and silver.

The weather wasn’t super cooperative in Laax, Switzerland as fog, snow, and wind led to the cancellation of the snowboard halfpipe finals. The qualification results stood as the final results. In the women’s event, that meant a fifth-place finish for Elizabeth Hosking and an eighth-place finish for Brooke D’Hondt. That was a career-best World Cup result for 17-year-old D’Hondt.

For the second straight week, Mirela Rahneva finished fourth in an IBSF World Cup skeleton race in Altenberg, Germany. Sitting second after the first run, Rahneva was just barely bumped off the podium. Her two-run time of 1:57.16 left her just 0.01 back of bronze medallist Susanne Kreher of Germany and just 0.02 back of silver medallist Janine Flock of Austria. Another German, Tina Hermann, won handily on the home track by more than six-tenths (0.62) of a second.

Another Canadian, Jane Channell, earned her best result of the season, placing sixth in 1:57.92.

On Saturday, Cynthia Appiah finished fifth in the women’s monobob race at the IBSF World Cup in Altenberg, Germany with a two-run time of 2:02.42. She moved up from ninth after the first run with the third-fastest second run.

Appiah followed up with a seventh-place finish in two-woman with brakewoman Niamh Haughey.

Next up for Canadian bobsleigh and skeleton athletes will be the IBSF World Championships on the classic natural track in St. Moritz, Switzerland starting this weekend.

Alpine Skiing: Cameron Alexander makes a comeback to the top 10

The Canadian men made some noise at one of the most famous mountains on the FIS Alpine World Cup circuit.

On Saturday, Cameron Alexander charged out of his 27th start position to finish sixth in the men’s downhill on the legendary Streif course in Kitzbuehel, Austria. His time of 1:58.40 left him about half a second back of the podium. It’s his first top-10 World Cup finish since he earned a breakthrough victory in March.

That followed Broderick Thompson‘s ninth-place finish in the downhill on Friday. Starting 39th, he crossed the line with a time of 1:56.83, finishing 0.67 of a second back of the Austrian winner, Vincent Kriechmayr. This is Thompson’s first top-10 finish on the World Cup circuit since he won bronze in the super-G in Beaver Creek in December 2021. It is his best World Cup result ever in a downhill.

Canadian wrestlers got back in action at the Grand Prix de France Henri Deglane in Nice over the weekend.

Ana Godinez Gonzalez led the way with a gold medal in the women’s 62kg event. Justina Di Stasio captured silver in the 76kg event, while teammate Taylor Follensbee joined her on the podium winning bronze. Karla Godinez Gonzalez also won a silver medal in the 53kg event while Tianna Kennett added a bronze at 57kg.