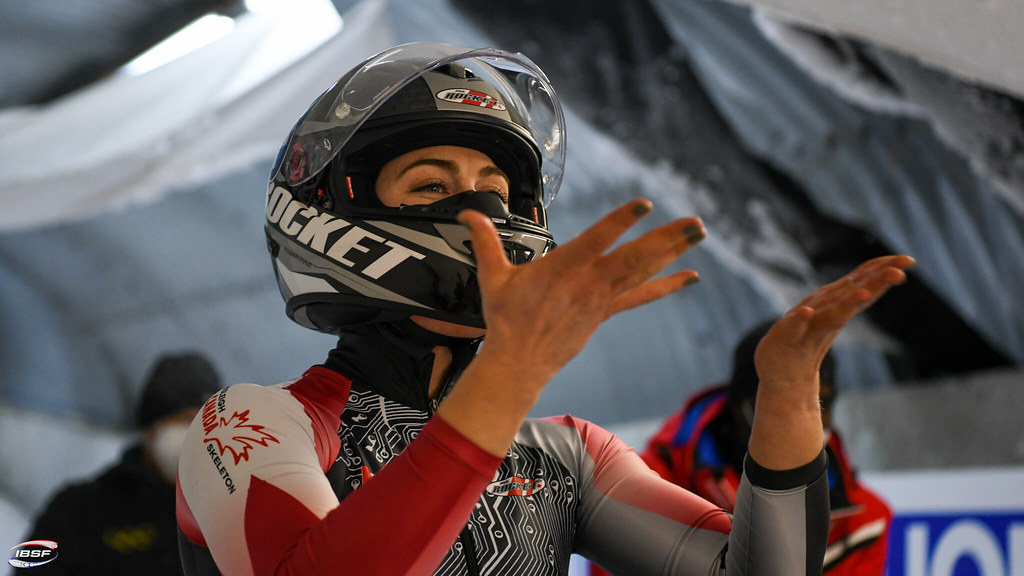 The women of Team Canada had a busy weekend, from winning a historic monobob medal to claiming back-to-back gold medals (plus a track record!) in speed skating.

Let’s get right into it:

Melissa Lotholz slid into the Canadian history books at the Women’s Monobob World Series in Innsbruck, Austria on Saturday. She became the first Canadian to win a monobob World Cup medal after capturing bronze on the 14-turn track. She’ll represent Canada at the upcoming IBSF World Championships in Altenberg, Germany this month.

Team Kripps also had a special weekend in Austria. Pilot Justin Kripps and his teammates Ryan Sommer, Ben Coakwell and Cam Stones raced to a third place finish at the IBSF World Cup to capture the third place Crystal Globe in four-man bobsleigh. The Canadian four-man crew will finish the World Cup season with one silver and two bronze before heading to Worlds.

Team Canada athletes claimed six medals at the X Games in Aspen, Colorado over the weekend.

Megan Oldham led the pack with two freestyle skiing medals. The 19-year-old took a silver in women’s big air, followed by a bronze in slopestyle.

Elsewhere on the slopes, Cassie Sharpe and Rachael Karker completed a double podium for Canada in women’s ski superpipe, winning silver and bronze respectively. Meanwhile, snowboarder Laurie Blouin won her first medal of the season with a bronze in the slopestyle competiton.

On the men’s side, Evan McEachran claimed a bronze in men’s ski slopestyle to close out the weekend.

Marie Michèle Gagnon reached her first World Cup podium since 2016 at the FIS Alpine World Cup in Garmisch Partenkirchen, Germany. The 31-year-old raced to a super-G bronze medal after crossing the finish line with a time of 1:16.63.

Meanwhile, in Belarus, Lewis Irving landed on his second podium of the season at the FIS Freestyle Aerials World Cup. The 25-year-old from Québec City put up a score of 118.14 for a bronze medal in the men’s aerials single round competition.

Canadian speed skaters had another successful weekend in the long track bubble at the ISU World Cup in Heerenveen, Netherlands.

For the second weekend in a row, Ivanie Blondin, Isabelle Weidemann and Valérie Maltais opened the weekend with a gold medal in the women’s team pursuit. This time around, they set a new track record in Heerenveen with a speedy time of 2:54.640.

Blondin also claimed another mass start podium with a silver medal on Saturday.

Laurent Dubreuil just knew it was a good one 🇨🇦

READ: Lockdown Down Under: Canada’s tennis stars train in quarantine for Aussie Open

Canadian tennis fans will be excited to see Bianca Andreescu on the court this week. After 15 months away from competition, the 2019 US Open Champion is getting ready to play at the Australian Open. She’ll warm up by being the top seed at the Grampians Trophy, a WTA 500 event in Melbourne for players who were unable to train on-court during their 14-day quarantine lockdown after arriving in Australia. Her first match will be in the second round against either fellow Canuck Leylah Fernandez or American Sloane Stephens.