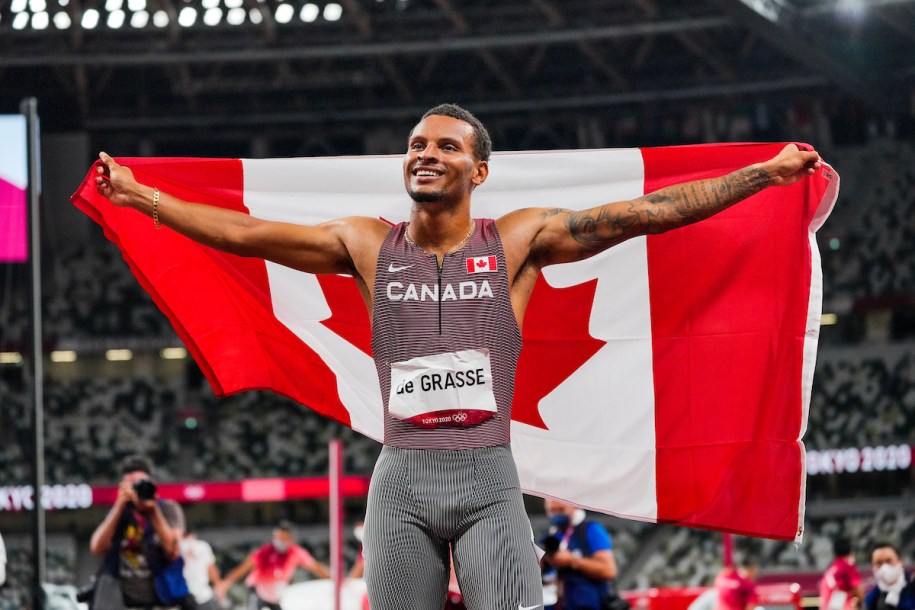 Normally, this would be the time in an Olympic Games to speculate about who would carry Canada’s flag at the Closing Ceremony.

But as we know, Tokyo 2020 has been far from normal. Pandemic protocols will play a huge part in how the decision about flag bearers is made — for Team Canada and every other nation.

So, while some of these athletes have already flown home from Japan, we still want to celebrate the performances that, in any other Olympic year, would be candidates for flag bearer consideration.

With his gold medal in the 200m, De Grasse became the first Canadian since 1928 to be Olympic champion in the event. Not only that, but he successfully defended his bronze in the 100m and helped Canada defend its bronze in the men’s 4x100m relay.

The 26-year-old sprinter has now hit the podium in all six Olympic events in which he’s competed. That makes him the second most decorated Canadian summer Olympian of all time, second only to…

For almost the entire first week of these Games, Canadians watched as the 21-year-old inched closer to history every day. After a few near misses, Oleksiak claimed her third medal in Tokyo, and seventh overall, on the final day of competition at the Tokyo Aquatics Centre.

And while her personal achievement grabbed the headlines, Oleksiak would be the first one to pay tribute to her fellow Canadian swimmers, including…

Team Canada picked up an impressive six medals in the pool, but Mac Neil‘s performance in the 100m butterfly earned the only gold.

Mac Neil is actually one of three Canadian swimmers, along with Oleksiak and Kylie Masse, to have earned a trio of medals in Tokyo. She isn’t, however, the only Canadian to have won gold in their Olympic debut. In that respect, she’s joined by…

The 28-year-old was just the second Canadian woman to ever win an Olympic medal in weightlifting, with her gold-medal performance in the women’s 64kg category.

Warner put in the performance of a lifetime in Tokyo, winning Canada’s first-ever gold in the decathlon with a Canadian and Olympic record of 9018 points.

The 31-year-old has steadily climbed his way to the title of World’s Greatest Athlete, with a fifth-place finish at London 2012 and a bronze medal at Rio 2016. He’s not the only one to have worked for years to make Olympic history; there’s also…

Despite being one of the top sprint canoers in the world, this was Vincent Lapointe‘s first chance to compete in the Olympics. Women’s canoe events are new to the Olympic program, and the 29-year-old didn’t disappoint.

READ: ‘I did it’: Vincent Lapointe revels in canoe sprint history

Racing in the first-ever Olympic final in the C-1 200m, Vincent Lapointe dug deep and claimed silver. A few days later, she teamed up with Katie Vincent to win the first ever bronze in the women’s C-2 500m. That was a testament to the power of teamwork, just like…

It’s tough for a whole team to carry a flag, though soccer player Christine Sinclair did get the honour at London 2012 after Canada won bronze. The 38-year-old captain saw her team reach even loftier heights in Tokyo, winning a first ever gold medal.

Team Canada also reached historic heights in softball, with a bronze medal representing the nation’s best ever finish in the event. And of course, there’s the women’s eight rowing crew earning some redemption with a gold medal, Canada’s first in the event since Barcelona 1992.

Whether it’s one of these athletes or someone else entirely who earns the Closing Ceremony nod, there’s no doubt that Tokyo 2020 has provided plenty of reasons to proudly hold the flag high.