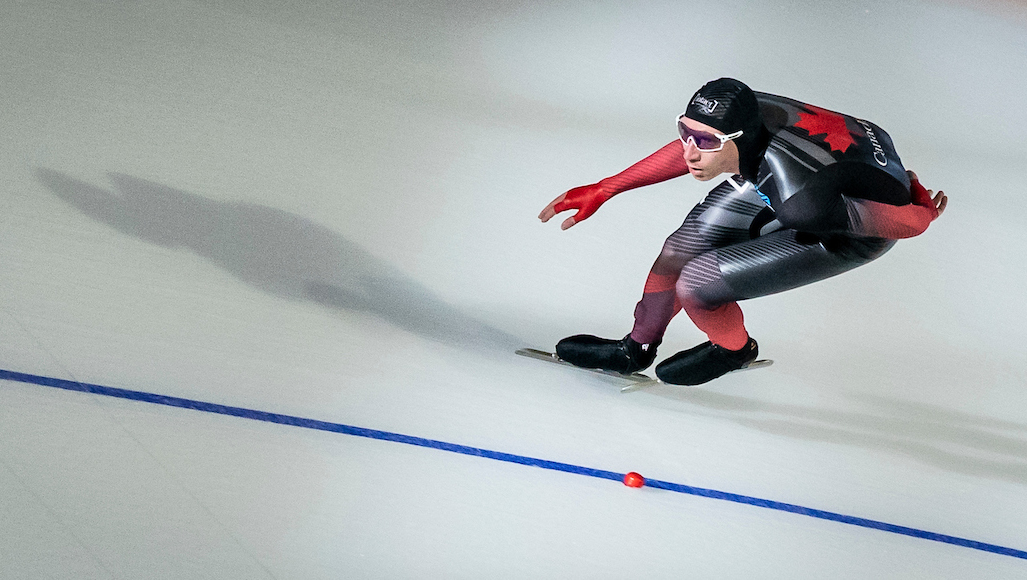 The road to Beijing 2022 ramped up for speed skaters at the 2021 Canadian Long Track Championships. Meanwhile, members of Team Canada’s Tokyo 2020 gold medal-winning women’s soccer team were recognized for their accomplishments, while the men’s team is on the hunt for their own moment of glory.

Team Canada’s long track speed skaters continued their strides towards Beijing 2022 at the 2021 Canadian Long Track Championships. Results from the five-day competition at the Calgary Olympic Oval will determine the skaters who will head out to the ISU World Cups in November and December. Those names are expected to be announced next week.

Among the highlights were Isabelle Weidemann lowering the national record in the women’s 5000m to 6:46.81 as she took more than five-tenths of a second off the mark she had set at the Canadian championships in 2019. Weidemann also won the 3000m ahead of two skaters she has had great international success with in the team pursuit, Ivanie Blondin and Valérie Maltais.

The 1500m races saw Ivanie Blondin and Connor Howe came away with gold medals. Blondin, who has her sights set on her third Olympic appearance in February, finished with a time of 1:54.64. Meanwhile 21-year-old Howe smoked the competition, beating out the field by a full second with a time of 1:43.50. Blondin went on to also win the women’s mass start, in which she is a five-time world medallist.

In the sprints, Laurent Dubreuil took home the men’s titles in both the 500m and 1000m events. The reigning 500m world champion finished with a time of 34.12 seconds in the former, just 0.01 off his personal best time.

In the women’s 500m, Brooklyn McDougall and Marsha Hudey both finished with a time 37.85 seconds, but McDougall took home gold in a photo finish.

Valérie Maltais crushed her personal best time in the 1000m event in over two seconds to cross the line in 1:14.95. Antoine Gélinas-Beaulieu won the men’s mass start ahead of fellow world championship medallist Jordan Belchos.

Concacaf Qualifiers continue in front of a home crowd 🇨🇦

READ: Canada’s road to the FIFA World Cup is heating up

Team Canada is getting hot at the right time.

Six matches into the final round of the Concacaf Qualifiers for the FIFA World Cup Qatar 2022, Canada remains unbeaten and sits in position to qualify for its first men’s global soccer championship in 36 years.

As it stands, Canada sits in third place (10 points) trailing only Mexico (14 points) and the United States (11 points).

On Wednesday at BMO Field, Canada scored four unanswered goals to beat Panama 4-1 and subsequently leapfrog them in the standings. The win also featured a spectacular goal from Alphonso Davies that forced the collective jaws of the soccer world to drop.

Canada will be back in action next month as they will host a set of crucial games in Edmonton. They will play Costa Rica on November 12 to conclude the first half of fixtures, before Mexico comes to town on November 16. Match play concludes in March 2022.

On Sunday, the Portland Thorns, led by Captain Christine Sinclair, captured the NWSL Shield. This is awarded every season to the NWSL team which has the best regular season record. Sinclair was also a part of the Thorns when they won the NWSL Shield in 2016. The team has had a strong year, also winning the 2021 Challenge Cup and 2021 Women’s International Champions Cup.

They have clinched a spot in the NWSL playoffs, and will receive a bye for the first round, advancing straight to the semifinals.

Even on French soil, Team Canada athletes are feeling the love for their incredible gold medal run in Tokyo. Members of the Tokyo 2020 women’s soccer team will participate in a Celebration Tour that begins this Saturday in Ottawa, before moving to Montreal on October 26.

Ben Flanagan and Leslie Sexton won their respective races at the Canadian 10km championships in Toronto this weekend. Flanagan, who came up just shy of qualifying for the Tokyo 2020 Olympic team in the men’s 5000m, finished with a time of 28:41 to beat out Luc Bruchet (28:29), who was selected for the Olympic team in the 5000m. Finishing third was Ben Preisner (28:53) who made his Olympic debut this summer in the marathon.

This week marks the start of world championships in artistic gymnastics and track cycling.

The 2021 FIG World Artistic Gymnastics Championships began on Monday in Kitakyushu, Japan and will run until Sunday. Canada will have nine athletes competing, including Tokyo 2020 Olympian René Cournoyer. See the full list here (Laurie Denommée withdrew before the women’s qualification). You can follow the results here.