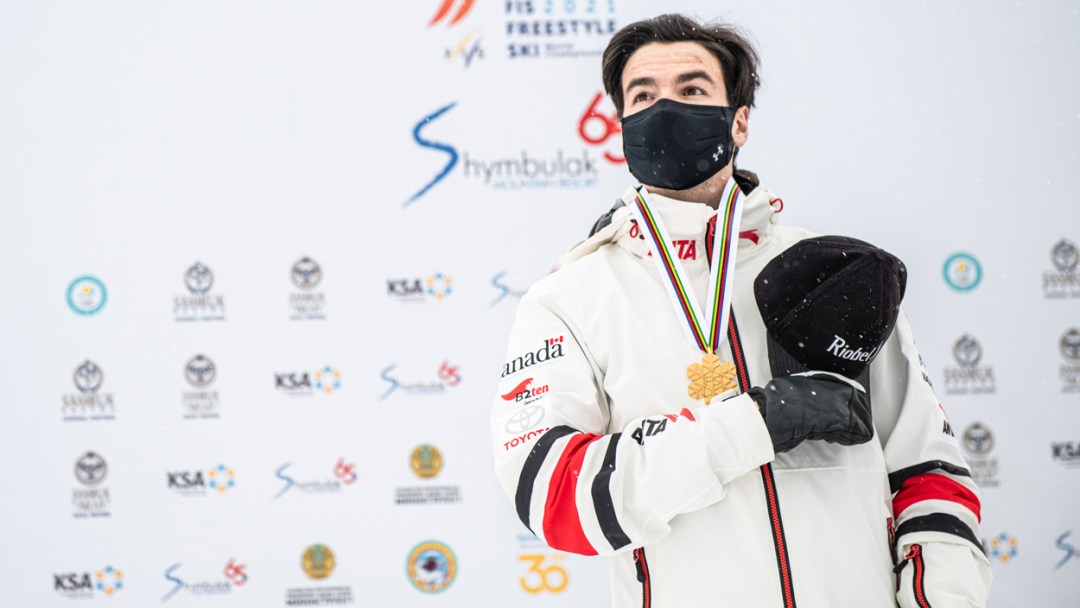 Canadian winter athletes continue to shine in international competition as the countdown to Beijing 2022 ticks on.

There were many familiar faces such as Mikaël Kingsbury, Ivanie Blondin, and Christine De Bruin returning to the podium for more hardware.

Here’s what you may have missed:

Kingsbury sustained the first major injury of his career last year in Ruka, Finland, which forced him to miss the event and most of the World Cup season. He came back with force in 2021, leading the way after the qualifiers and scoring a total of 82.99 points in the final to earn gold.

Canadian speed skaters have been heating up the ice on the World Cup circuit and that continued this past weekend in Salt Lake City where the altitude lends itself to fast times.

Ivanie Blondin, Isabelle Weidemann and Valérie Maltais won their second consecutive team pursuit gold, clocking in with a Canadian record time of 2 minutes 52.412 seconds, breaking the mark they set at the Utah Olympic Oval in 2020.

Blondin then won the gold medal in the women’s mass start event on Sunday.

Laurent Dubreuil broke his personal best time in the 500m on two separate days on his way to two bronzes. His new PB of 34.053 seconds is just shy of the Canadian record held by Jeremy Wotherspoon (34.03). Weidemann came close to the podium with a fourth-place finish in the 3000m.

Team Canada collected a pair of medals over the weekend at the IBSF World Cup in Altenberg, considered one of the toughest bobsleigh tracks in the world.

Cynthia Appiah posted a career-best result by winning silver. She finished just 0.06 seconds out of first place as she earned her first podium as a pilot at the World Cup level.

On Sunday, the duo of Christine De Bruin and Kristen Bujnowski slid to their third podium in as many weeks with a bronze in the two-woman event. De Bruin had finished just shy of the podium in the monobob, finishing fourth. There was also a fourth-place for Canada in the two-man event, courtesy of Christopher Spring and Mike Evelyn. Team Kripps led Canada in the four-man event as Justin Kripps piloted his sled to a fifth-place finish.

Broderick Thompson stunned in the Birds of Prey super-G in Beaver Creek, Colorado on Thursday when he came out of the 35th start position to win the bronze medal for his first career World Cup podium.

Marie-Michèle Gagnon broke into the top 10 twice on home snow in Lake Louise this weekend, as she finished ninth in both the downhill on Saturday and the super-G on Sunday.

Her performance earned her a podium spot in the overall sprint category, as she finished third. Canada’s lone endurance rider, Maggie Coles-Lyster, finished fourth overall in her discipline.

Bev Priestman was named the IFFHS women’s world best national coach in 2021 after leading Canada to gold at Tokyo 2020.

Canada’s Jessie Fleming had another reason to celebrate Sunday, as she helped Chelsea win the Women’s FA Cup final. Chelsea’s 3-0 win against Arsenal clinched a domestic treble for the first time in the club’s history.