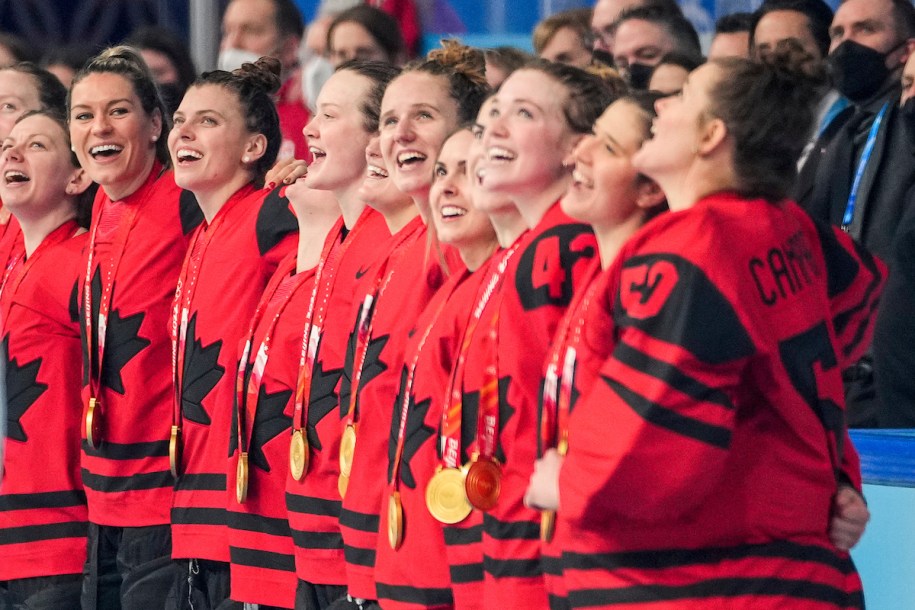 Over the past year, Canadian women shined as they competed in the Summer and Winter Olympic Games through their performances, determination and resilience on the world stage.

In Tokyo 2020 – held in the summer of 2021 due to pandemic disruption – Canadian women delivered 18 of the 24 medals won by Team Canada; tied for a Canadian record in a non-boycotted Summer Games.

Their heroics were not just limited to on-field play. Multiple Canadian women fought for change to make the sports world a better and more inclusive space for future generations of athletes, and overcame two years of pandemic-related disruptions to proudly represent Canada.

Here’s a look at some of the notable storylines from Team Canada women in the past year:

After back-to-back bronze medal finishes, Canada’s women’s soccer team broke through in Tokyo to win Olympic gold for the first time in the nation’s history.

The historic run featured a number of storylines that captivated the nation, including a revenge semifinal win against the U.S., a jaw-dropping performance by Stephanie Labbé which included a number of clutch saves, and the golden goal scored by 20-year-old Julia Grosso. In a fitting final Games, Christine Sinclair capped off her Olympic career bringing home her first Olympic gold medal.

Team Canada reclaimed the throne atop women’s hockey by going undefeated in the Olympic tournament capped off by a win in the gold medal game against the United States 3-2.

Off the heels of a IIHF gold in 2021, Team Canada dominated throughout the tournament. They scored 57 goals, the most ever in one Olympic women’s hockey tournament.

Captain Marie-Philip Poulin continued to show up when it mattered most; netting two goals in the final.

Nurse recorded 18 points (5 goals, 13 assists), setting the women’s record for most points in an Olympic tournament. She opened up the scoring in the gold medal game, and also notched an assist for teammate Marie-Philip Poulin. With the gold, she became the first Black woman to win Olympic gold in the sport.

Before competing at the Olympic Games, Mandy Bujold won a landmark court battle against the highest Olympic court in order to qualify for her spot in Tokyo.

The International Olympic Committee (IOC) originally ruled Bujold ineligible to compete in Tokyo because she had recently given birth to her daughter and was recovering postpartum during the 2018 and 2019 qualification period determined by the ICO after the pandemic wiped out the 2020 competitive year. Bujold argued discrimination based on sex as she had been ranked second in the world before her maternity leave, but didn’t compete in the three events used in the IOC’s revised plan.

“My Olympic berth is not what matters here,” Bujold said in a statement. “What matters is the recurring pattern of gender inequality in sport.”

Bujold went onto place 17th in the women’s 51kg flyweight.

Basketball player Kim Gaucher was also the face of change by giving competing mothers the chance to be with their newborns in Tokyo.

Family members of athletes were initially barred from attending the Tokyo Olympics due to coronavirus restrictions, but Gaucher – who gave birth to her daughter Sophie a few months before the Games – appealed the decision to the Tokyo 2020 organizing committee.

Weeks before the Games, The IOC allowed breastfeeding moms to bring their children to Tokyo.

If Rio 2016 was remembered for Penny Oleksiak’s ascendance atop the swimming world, Tokyo 2020 showed there was a whole roster of swimmers on Team Canada ready to shine on the biggest stage.

Team Canada took home six medals in swimming, all of them won by women. Maggie Mac Neil won a gold in the 100m butterfly and came away with three medals in total. Kylie Masse took home two silvers and set a new Canadian record in the 200m backstroke. Oleksiak, meanwhile, became Canada’s most decorated Olympic athlete at just 21 years old.

READ: Swimmers make Tokyo 2020 a Games to remember for Canada

Cynthia Appiah and Dawn Richardson Wilson represented Canada in bobsleigh, and wore their Ghanian roots with pride competing in their first Olympic Games.

Appiah, the more senior of the two, had been a national team member since 2015, while Richardson Wilson competed after taking up the sport just three years ago.

The two finished eighth in the two-woman bobsleigh event.

READ: Appiah and Richardson Wilson on the rise after Olympic debut

Chef de Mission’s act as the spokesperson for Team Canada in the lead up to and during the Olympics, and serve as mentors, supporters, and cheerleaders for competing athletes.

Both Marnie McBean and Catriona Le May Doan were selected based on their previous Olympic achievements, and their willingness and motivation to continue their Olympic journey well after their playing days.

Marnie McBean is a four-time Olympic medallist in rowing, and holds the record for most gold medals by a summer Olympic athlete. Her involvement in Tokyo 2020 was her 10th Olympic Games – three as an athlete, two as media and fifth in a mentorship role.

Catriona Le May Doan is a four-time Olympian, and three-time Olympic medallist in long track speed skating. Fueled by her love of the Games, she was chosen to represent Team Canada as the Chef de Mission for the 2022 Olympic Winter Games.

You can read Marnie’s and Catriona’s personal essays by following the link.

Canada’s record-breaking medal total at Tokyo 2020 would not have been possible without the women. In fact, 18 of Team Canada’s medals – a whopping 75 per cent – were won in women’s events and they came in nine different sports.

During the Tokyo 2020 Olympic Games, Team Canada showed its solidarity with the social justice movement efforts as the women’s rugby and soccer teams kneeled ahead of their medal rounds qualifier matches.

CAREER HIGHLIGHTS Finished 16th in the all-around at the 2008 Olympic Games Is the first Canadian female gymnast to win...